Does the Federal Reserve Drive the Stock Market Trend?

A closer look at assumptions about interest rates and the market

[Editor's note: The text version of the video is below.]

Many investors heed every utterance from the Federal Reserve, hoping they hear a clue about interest rates. They assume that a fall in interest rates means higher stock prices, while rising rates will push stocks lower.

For example, a CNNMoney article offered this quote from the co-author of a book titled "Invest with the Fed":

"I don't believe there's any influence that's greater than Fed policy.... There is a very strong association between Fed monetary policy and capital market returns."

But does this example of conventional wisdom regarding interest rates and stocks square with the facts?

Well, it's true that from October 1974 to December 1976, the stock market rose as the Fed funds rates trended lower. This occurred again from July 1984 to August 1987.

Conversely, stock prices sometimes falter as interest rates climb higher. This happened from January 1973 to October 1974, and again from December 1976 to February 1978.

But, stock prices have been known to fall as interest rates trend lower. Review this chart and commentary from the February 2010 Elliott Wave Theorist:

[The chart] shows a history of the four biggest stock market declines of the past hundred years. They display routs of 54% to 89%. In all these cases, interest rates fell, and in two of those cases they went all the way to zero!

The next chart shows when stocks and interest rates trended higher together. You can see the rise of the Dow Industrials from March 2003 to October 2007 as rates climb from around 1% to over 5%. 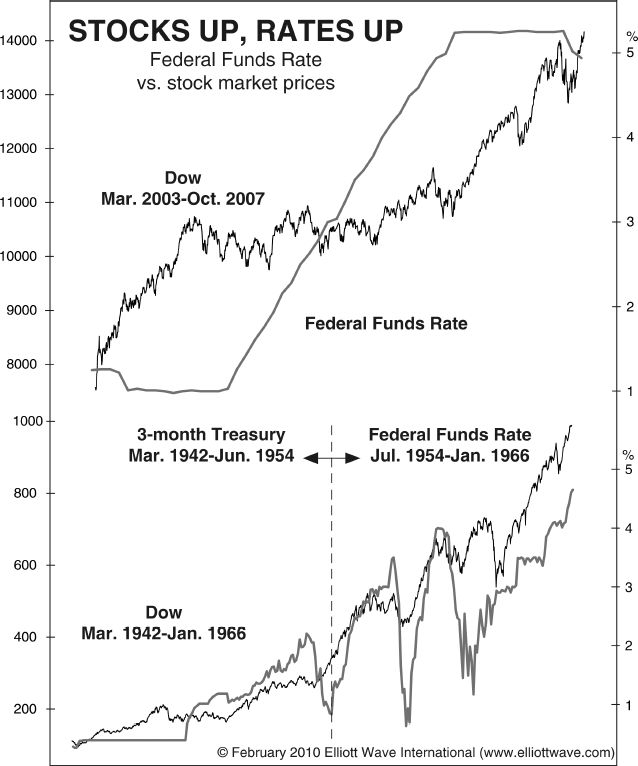 Here's the point: There is no consistent relationship between interest rates and the stock market.

Indeed, we see no reliable relationship between stock trends and any external "influence" on the market.

Let's return to the Theorist:

Exogenous-cause logic always seems compelling. But the true underlying cause of financial and macroeconomic trends is waves of social mood.

The Wave Principle reveals that stock market prices unfold in recognizable patterns -- and these patterns offer predictive value that you will not find from central banks.

Trade Bonds like a Pro: Put an Expert in Your Corner

Interest Rates Pro Service gives you timely forecasts to help you capitalize on trends in bonds and prepare for the next move.

Trade Bonds like a Pro: Put an Expert in Your Corner

Interest Rates Pro Service gives you timely forecasts to help you capitalize on trends in bonds and prepare for the next move.

Spotting a "Tired" Look in the U.S. Long Bond