Two resources from Elliott Wave International can help you get started

Recognizable patterns unfold in the financial markets. Using Elliott waves, you can learn to identify these patterns and use them to anticipate where prices will go next. Get started with a basic understanding of the Wave Principle.

When Ralph Nelson Elliott discovered the Wave Principle nearly 70 years ago, he explained how social (or crowd) behavior trends and reverses in recognizable patterns. You can learn to identify these patterns as they unfold in the financial markets, and use them to help anticipate where prices will go next. Elliott Wave International has developed a free comprehensive online course -- The Free Elliott Wave Tutorial: 10 Lessons on the Wave Principle -- which describes these patterns and explains how they relate to one another.

To use the Wave Principle as you analyze the markets, you need a basic understanding of the Elliott method -- the rules and guidelines, the literal shape of individual waves, even when the larger trend may turn.

To get you started, we've included an excerpt from the free Elliott Wave Tutorial, adapted from Elliott Wave Principle by Frost and Prechter, and a short video clip from the live presentation, Tips from a Pro.

Here is your quick lesson excerpted from The Free Elliott Wave Tutorial:

In his 1938 book, The Wave Principle, and again in a series of articles published in 1939 by Financial World magazine, R.N. Elliott pointed out that the stock market unfolds according to a basic rhythm or pattern of five waves up and three waves down to form a complete cycle of eight waves. The pattern of five waves up followed by three waves down is depicted in Figure 1-2. 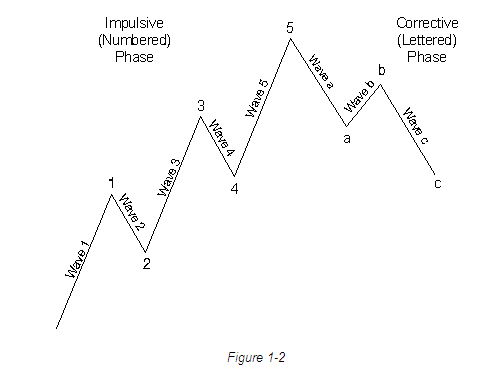 At the terminus of the eight-wave cycle shown in Figure 1-2 begins a second similar cycle of five upward waves followed by three downward waves. A third advance then develops, also consisting of five waves up. This third advance completes a five wave movement of one degree larger than the waves of which it is composed. The result is as shown in Figure 1-3 up to the peak labeled (5). 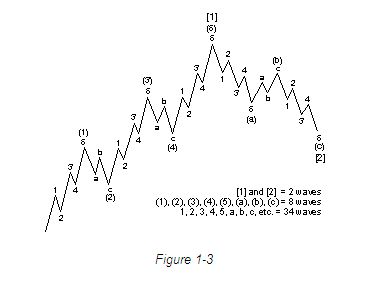 At the peak of wave (5) begins a down movement of correspondingly larger degree, composed once again of three waves. These three larger waves down "correct" the entire movement of five larger waves up. The result is another complete, yet larger, cycle, as shown in Figure 1-3. As Figure 1-3 illustrates, then, each same-direction component of a motive wave, and each full-cycle component (i.e., waves 1 + 2, or waves 3 + 4) of a cycle, is a smaller version of itself.

Watch this video clip from Tips from a Pro for more on Elliott waves.

EWI's Chief Currency Strategist Jim Martens explains how learning to use Elliott waves can be as simple as counting to 5 and knowing your A-B-Cs.

These 10 Lessons Will Improve the Way You Invest -- Forever

Learn how you can apply the Wave Principle to improve your trading and investing in this free 10-lesson tutorial. You'll learn:

Investors: Are You in Danger of Emotion-Driven Decisions? You're Not Alone.

A "Manufactured" Reason for This Stock Market Sell-Off