Public Pensions: "The writing appears on the wall"

An update on the precarious state of public pensions

"The writing appears to be on the wall" for public pension plans -- and $3.6 trillion is on the line. Managers have been "embracing riskier assets and sweeping underfunded liabilities under the rug." Now, here's an update.

Many public pension plans have performed an amazing feat: They are still in trouble even as stock prices soar to all-time highs.

It's no small matter -- $3.6 trillion is at stake, according to the PEW Charitable Trusts (April 12).

We've been keeping subscribers ahead of this developing crisis.

Conquer the Crash warned retirees against relying on pension funds to pay for their retirements. "A financial crisis of Supercycle proportions will devastate funds' holdings," the June 2007 Elliott Wave Theorist reiterated. The bear market decline of 2007-2009 ravaged pension funds, but most of them pulled themselves together enough to remain solvent. CTC's advisory nevertheless remains in place. Many pension fund assets are far more precariously positioned today than they were before the 2007-2009 bear market. ...  In the U.S., the public pension funding gap is widening fast. Managers have tried to make up for low yields by embracing riskier assets and sweeping underfunded liabilities under the rug through various accounting schemes. When we last covered public pensions in 2012, the funding gap was $1.83 trillion. Today, it's $3.4 trillion, almost twice as large. According to the Financial Times, the shortfall "is three times more than official figures."

Then, in September 2016, the Elliott Wave Financial Forecast showed this chart and said: 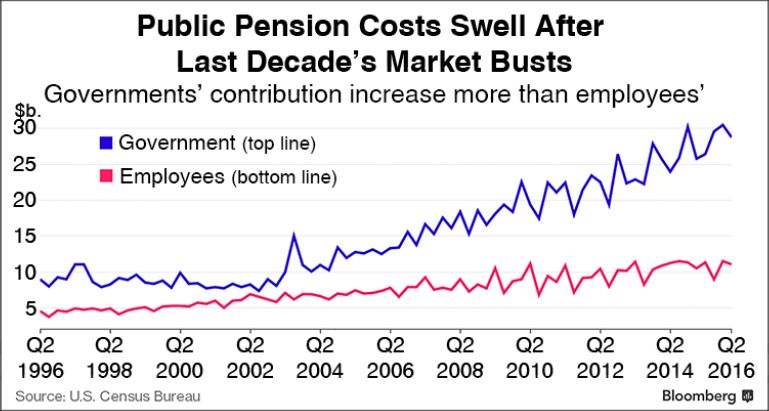 The chart shows the growing government pension costs (i.e., taxpayer costs) relative to the number of employees. Even the largest U.S. public pension fund is not immune. The California Public Employees' Retirement System (Calpers), with assets of about $300 billion, returned a paltry 0.6% on its investments through the year ended June 30. It was the worst performance since the bear market ended in 2009.

The Chicago Teachers' Pension Fund (CTPF) paid out $1.5 billion last fiscal year ... . But it only earned $7.8 million on its investments.

As was the case with the subprime mortgage crisis, the writing appears to be on the wall.

If public pensions are struggling now, imagine what will unfold when the next serious stock market downturn arrives.

Our Elliott wave analysis will help you to stay ahead of the financial trend.

Everyone is Ignoring this Bull Market. Are you?

What Every Trader Needs to Know Right NOW

DJIA: See Why October 1 Drop Was in the Cards (Plus, What’s Next…)