FAIL-outs! 7 Years and 4 Bailouts Have NOT Saved Greece's Stock Market

See the one chart that captures governments' inability to influence stocks

In ancient Greece, one of the most popular Olympic Games was known as the Pankration. In it, competitors would face off in a brutal, hand-to-hand combat to sudden death, sometimes taking that phrase to its literal conclusion. But here's the catch: At any point during the fight, a panel of judges could intervene and help one of the two contenders out.

For many investors in modern-day Greece, the last few weeks have felt oddly Pankration-like: the Athens Stock Exchange Composite (ASE) in one corner versus bearish forces in the other. Punches fly and hooks are thrown. Except that, the panel of judges -- in this case, eurozone creditors in charge of doling out financial bailouts -- well, they haven't come to the market's aid. Seven years and four bailouts later, it seems that those in charge have put the kibosh on their long-standing carte blanche payment policy of lending money to Greece no-questions-asked.

Starting in late May, the International Monetary Fund withheld its scheduled bailout installment until receiving proof that Greece's was meeting the demands of the bailout deal. Promptly, Greece's stock market got pummeled. From a May 23 Reuters:

It sounds sensible. The mainstream experts say it's true. Bailouts are bullish for stocks; no bailouts -- no market rallies.

Then again, in our June 2017 European Financial Forecast, editor Brian Whitmer introduced a radical idea: Bailouts are a paper tiger; they are powerless to stop stock market declines -- or fuel market gains.

On page 7 of the June European Finanical Forecast, Brian shows the following chart of Greece's ASE alongside bailout measures over the last decade and writes:

"If you ever needed visual evidence of government's inability to influence stocks, take a quick look at the Athens Stock Exchange Composite (ASE). The arrows depict each of the previous bailout attempts that failed to stop the ASE's 90% decline from 2007 to 2016." 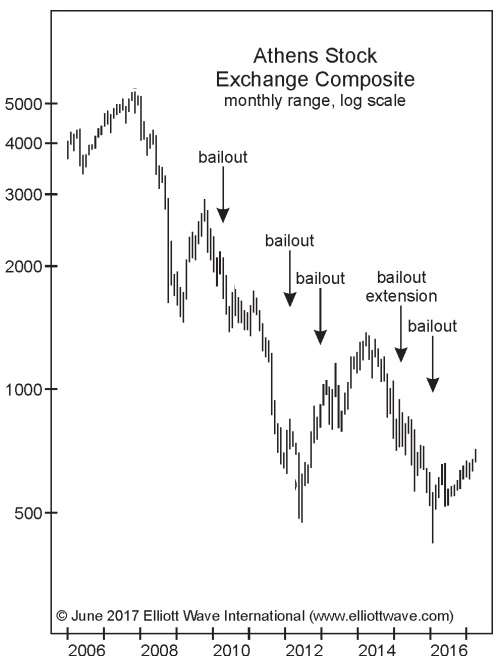 The fact is, since plummeting to a 27-year low in February 2016, the ASE has nearly doubled -- without any bailouts!

But make no mistake, if the "Cretan" bull is back -- or if Greek stocks turn down -- it won't be because of some latent response to bailouts; but rather, the immediate effect of the Elliott wave pattern underway on the ASE's chart. Brian explains:

"The [Elliott] wave labels show a complete" Elliott wave structure, one that suggests it's "time to look" for one kind of move in the ASE. 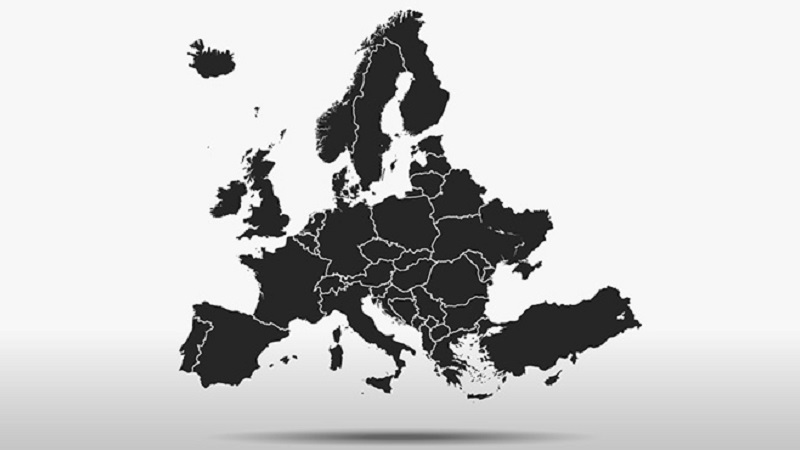 This Global Financial “Horror Story” Is Still Being Written