Evidence shows: Economic news impacts the stock market less that you may think

Sir Isaac Newton famously said that "for every action, there is an equal and opposite re-action." But does this "law of motion" apply to finance? Many investors believe so, but the evidence shows that economic news does not affect the stock market.

Apparently, many people who may not be inclined to study physics themselves are nonetheless interested in physicists' insights.

A case in point: This past weekend, I had just walked into a Barnes & Noble bookstore when I saw a store employee meander near me.

"What book is flying off the shelf?" I asked. "Um, this one," she replied, pointing to "Astrophysics for People in a Hurry" by Neil DeGrasse Tyson.

The mention of the book brought to mind a "favorite reads" list from Bill Gates in the June 5 issue of Time magazine, which I had read less than an hour earlier. The multi-billionaire noted: "One person I'm sorry I never got to meet is the physicist Richard Feynman. He had a brilliant mind ...."

And so did Sir Isaac Newton, one of the most influential physcists of all time, who stated that "for every action, there is an equal and opposite re-action."

What does all this talk about physics have to do with the stock market, you may ask?

Well, many investors believe the laws of physics, which apply in the physical world, also apply to the stock market.

But, that's not always the case.

In the world of physics, action is followed by reaction. Most financial analysts, economists, historians, sociologists and futurists believe that society works the same way. They typically say, "Because so-and-so has happened, such-and-such will follow." For example, [many] economists tell reporters: Good economic news makes the stock market go up; bad economic news makes it go down. But is it true?

The chart shows the Dow Jones Industrial Average and the quarter-by-quarter performance of the U.S. economy. 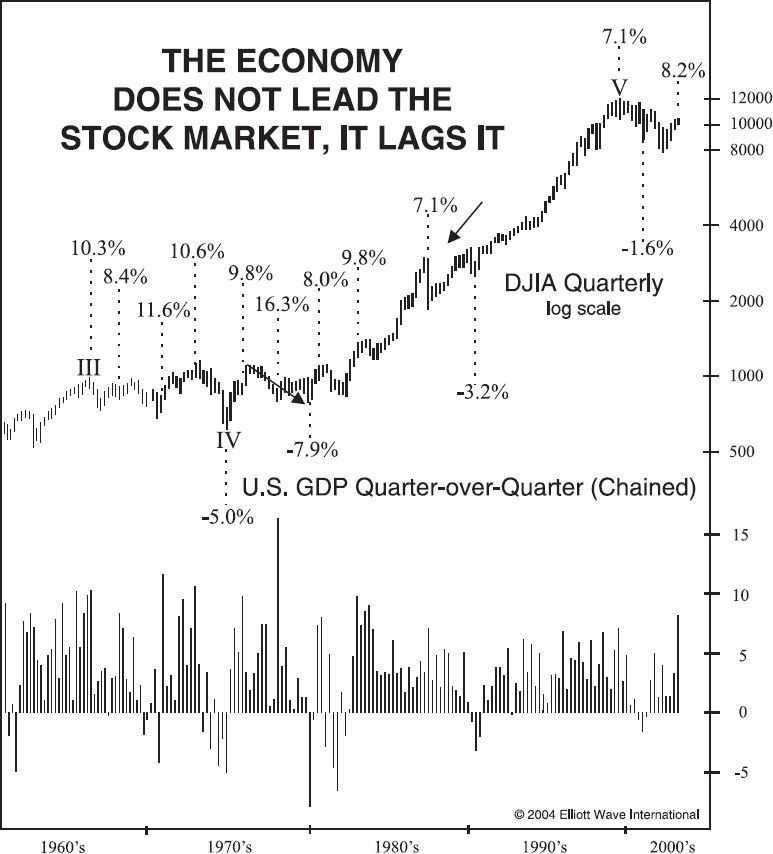 Much of the time, the trends are allied, but if physics reigned in this realm, they would always be allied. They aren't. The fourth quarter of 1987 saw the strongest GDP quarter in a 15-year span (from 1984 through 1999). That was also the biggest down quarter in stock prices for the entire period. Action in the economy did not produce reaction in stocks. The four-year period from March 1976 to March 1980 had not a single down quarter of GDP and included the biggest single positive quarter for 20 years on either side. Yet the DJIA lost 25 percent of its value during that period. Had you known the economic figures in advance and believed that financial laws are the same as physical laws, you would have bought stocks in both cases. You would have lost a lot of money.

The real driver of stock prices is investor psychology, which is reflected in the market's unfolding Elliott wave pattern.

Right now, this chart pattern is providing a big clue about how investors should position their portfolios for the rest of 2017.

Tesla Soars to Record Highs: Here's the "Naked" Truth as to Why