The Fed and Gold Prices: Don't Miss the "Invisible Gorilla"

Gold and silver are widely considered classic inflation hedges. But conventional wisdom often does not square with reality. Market observers tend to see what fits with their paradigm. This will change yours.

Many people in the financial community believe that precious metals are a classic inflation hedge.

The thinking goes that, as the purchasing power of a currency decreases during inflation, gold and silver prices will rise.

I could lay out a chronology of inflation and precious metal's prices since 1934, but let's focus on the Fed's quantitative easing program (QE) -- the central bank's biggest inflationary commitment in history.

Specifically, let's recall the precise moment of "all-time maximum QE heat," Dec. 12, 2012. That was the date that the Fed announced that it would more than double its QE efforts by purchasing an additional $50 billion worth of Treasury bonds per month, with no time limit.

Robert Prechter was on the phone doing an interview with GoldSeek radio during the Fed's announcement and said:

People who have been arguing for more inflation got the Fed to do exactly what they've been predicting. ... Since top investment banks are calling for $2,000 gold, I think you can bet against those ideas.

The chart below published about two weeks later. The second arrow shows the timing of Prechter's radio interview remarks: 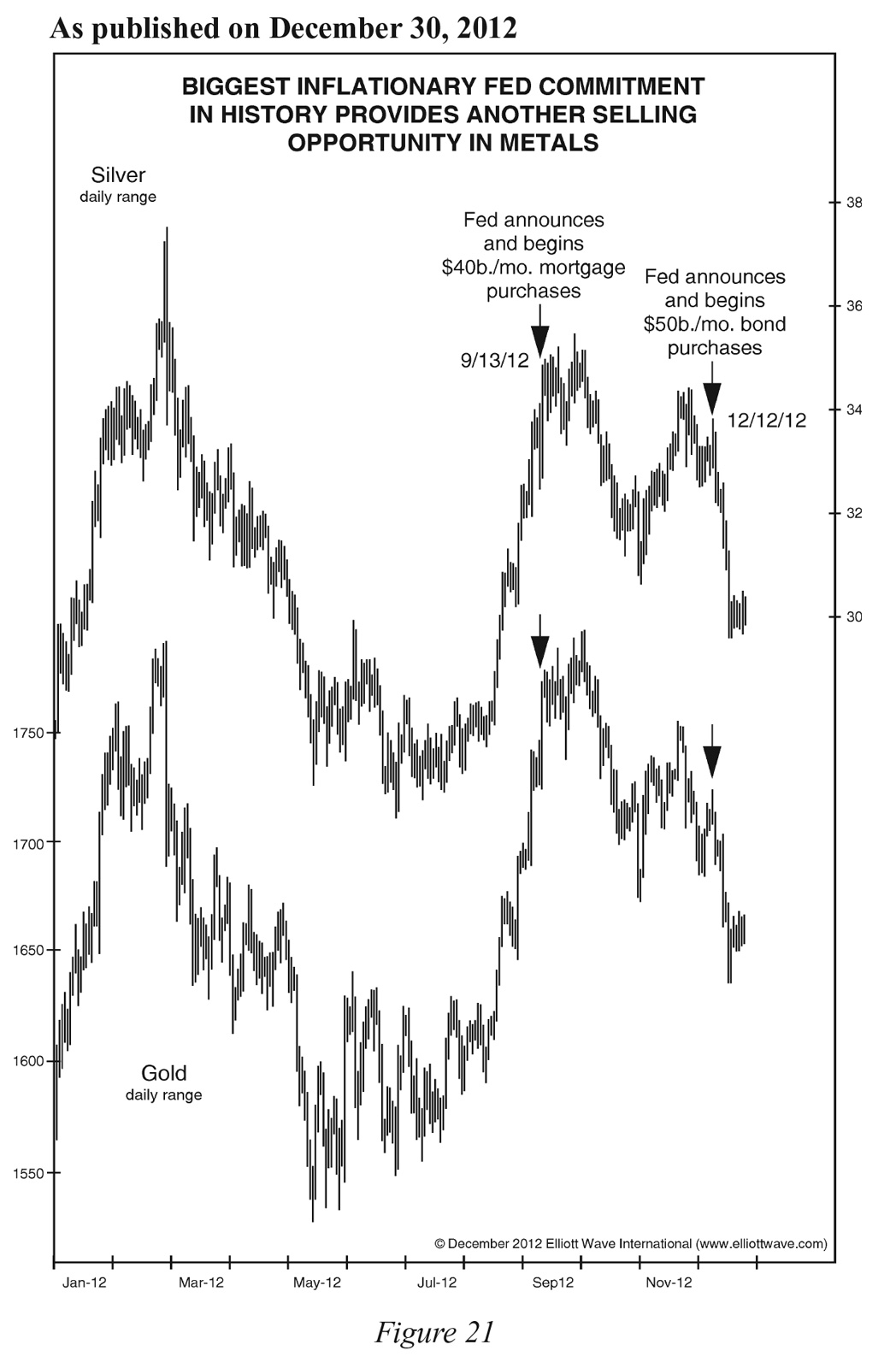 Speaking of paradox, gold and silver peaked on Fed day, December 12, at a lower high. I haven't seen any commentary about that amazing event.

Why the lack of commentary? Did observers simply overlook the fact that gold and silver peaked on the day the Fed announced a major ramping up of its inflationary efforts?

Commentary from Prechter's new book, The Socionomic Theory of Finance, provides insight. This chart from the book, which updates the picture through 2015, accompanies the commentary: 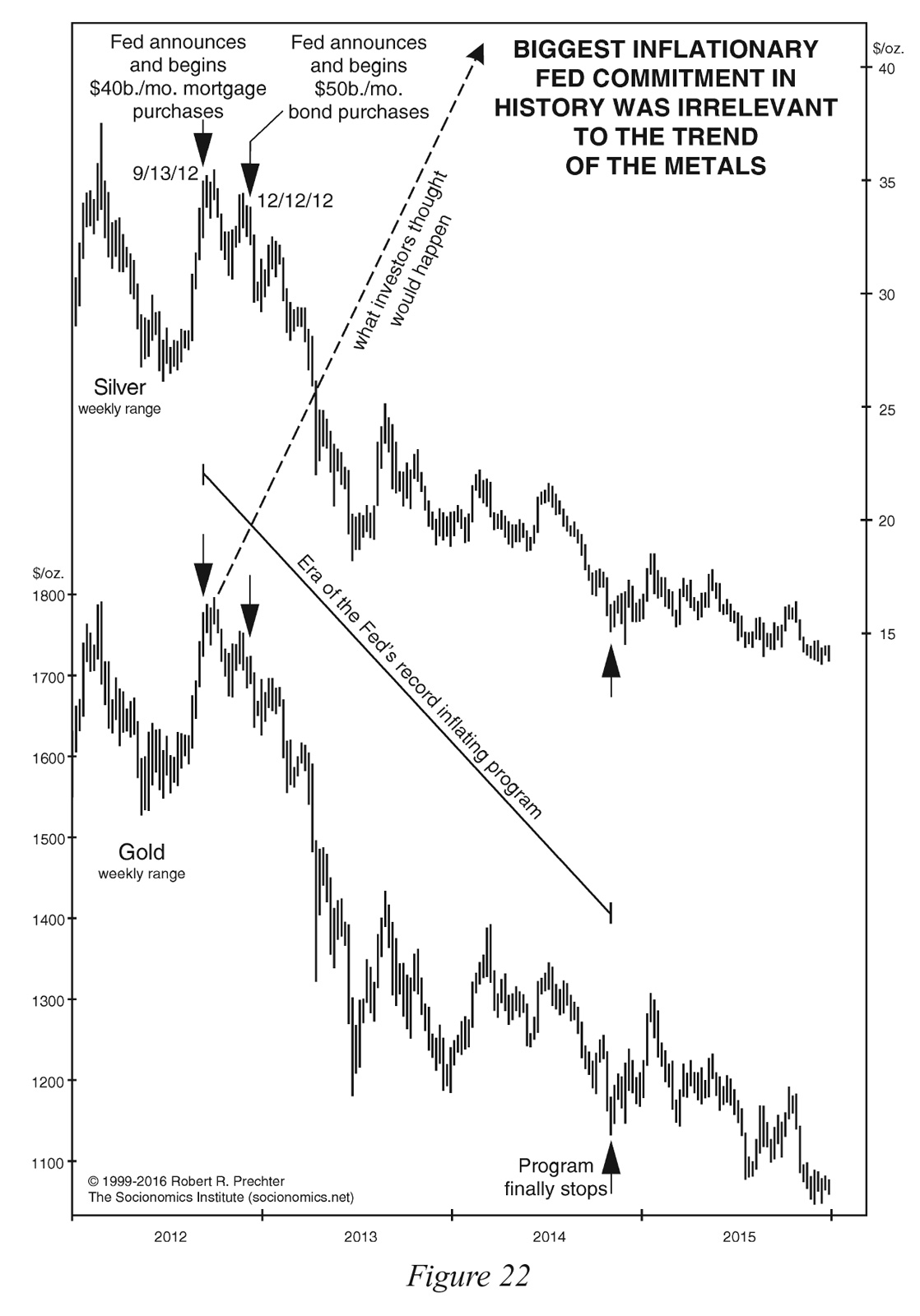 In the famous "invisible gorilla" experiment, subjects directed to count the number of times people in a video pass a basketball back and forth tend to miss the fact that a gorilla strolls across the court. Evidence of QE's total irrelevance to precious-metals pricing has likewise paraded boldly across observers' field of vision as these metals have declined for the duration of the Fed's program and past it, but almost no one sees it. In the cited experiment, about 50% of observers miss the gorilla. In finance, close to 100% of observers miss the gorilla. The chart is a gorilla that theoretical economists don't see. They are too busy concentrating on identifying whatever exogenous causes seem to fit their paradigm.

Had gold risen for the duration of the Fed's program from September 2012 through October 2014, commentators would have declared with steel-trap conviction how obvious it was that QE fueled the rise.

Every precious metal's speculator should be interested in what gold's price pattern is now showing.

Gold -- Too Much of a Good Thing

Copper DOUBLES in a Year-Plus Rally: The Contrary Forecast That Saw It Coming

What's that Sound?! It's the "Time of the Season" for Gold Investors!

Copper Soars to 10-Year High: Pity Not the Analyst, DO Use Better Analysis