Welcome to "Friday Favorites," a last-day-of-the-workweek segment where we showcase one of our most prized market forecasts, Elliott wave patterns, trading lessons, technical tools, and so on.

Today -- Friday, August 18 -- we've asked our chief commodities analyst Jeffrey Kennedy to pick his favorite of all Elliott wave patterns. For Jeffrey, the choice was simple -- the ending diagonal.

Here, in "Visual Guide to Elliott Wave Trading," the 2013 Amazon Finance best-seller he co-authored, Jeffrey explains his passion for the ending diagonal:

"If there is one Elliott wave pattern to get excited about trading, it's an ending diagonal. This pattern is rare in markets... It's a terminating pattern that shows up in the fifth wave position of impulse waves and the wave c position of A-B-C formations.

Now that you understand what an ending diagonal is, and where to "conservatively" place entry points and protective stops within one, let's see how Jeffrey uses this pattern to identify potential trend changes for an actual, real-world market.

The market is soybeans. And the time is late 2012. Back then, soybean prices had been on an epic bull-market journey to all-time highs. It was then that Jeffrey spotted a multi-year ending diagonal pattern come into full focus on soybeans price chart.

In his September 2012 Monthly Commodity Junctures, Jeffrey alerted his subscribers to the massive downside potential for soybean prices in the very near future and wrote:

"The multiyear Elliott wave pattern that calls for an extensive sell-off is an ending diagonal (Chart 1) ... It's possible that this Soybeans pattern, which began 13 years ago, ended this month at 1789. If so, the price of Soybeans should not only easily exceed the June low of 1244 ¾, but the December 2011 low at 1094 ¼ should give way as well. That's because sharp, strong moves follow ending diagonals." 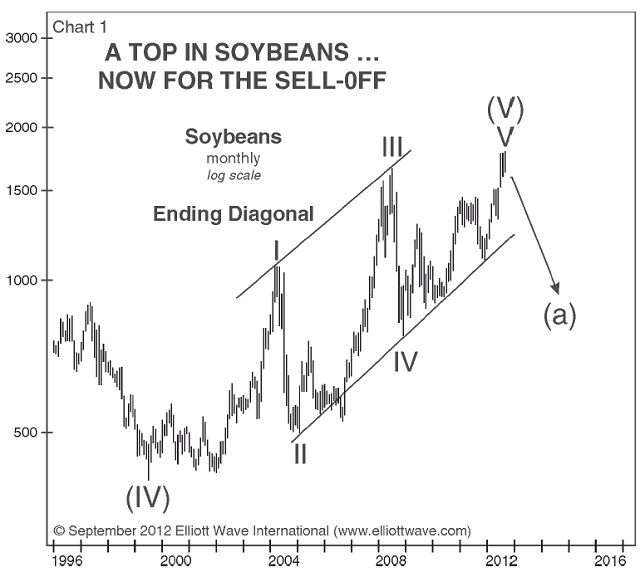 The next chart captures the dramatic fashion in which soybean prices plummeted from record highs in a gut-wrenching, 50%-plus, 4-year bear market selloff. 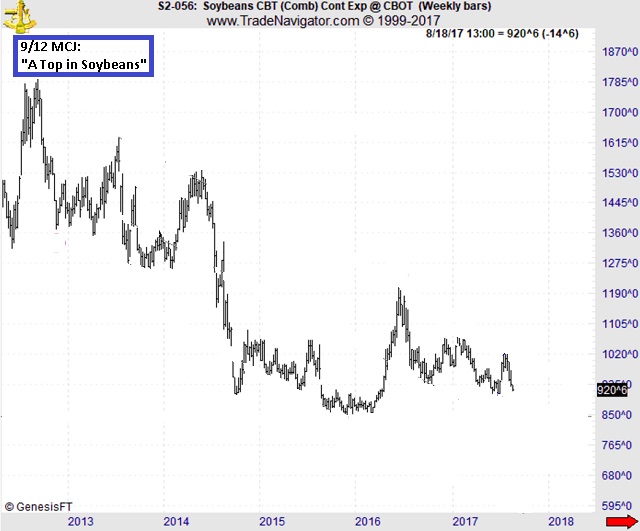 Let's review the traits of the ending diagonal:

All in all, it's easy to see why Jeffrey Kennedy chose this rare, yet highly rewarding pattern as his favorite. And, every day, he watches price charts of the world's leading commodity markets to see which of the dozen-plus Elliott wave patterns emerge to signal a high-confidence opportunity ahead.