Here at Elliott Wave International, we've shown time and again that what many investors assume about the stock market is often not the case.

Lately, you may have heard an assumption that, as long as the NASDAQ holds up, the stock market is in fine shape.

It's not a new notion; our research first addressed it head on nearly 20 years ago. Here's a chart and commentary from our December 1999 Elliott Wave Financial Forecast: 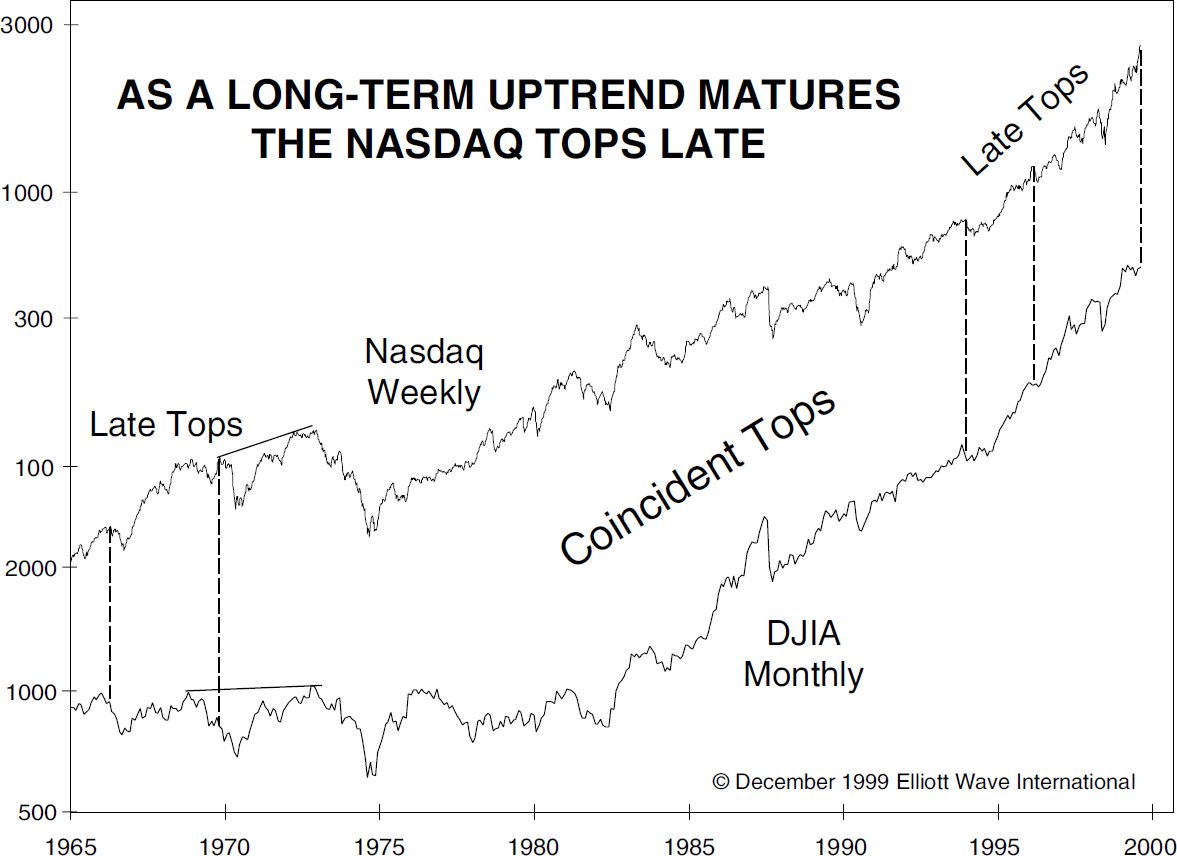 The chart shows that historically, when the NASDAQ (and its predecessor the OTC Index) pushes into record territory against a lagging Dow, the overall market is late in a long-term uptrend. Apparently, it is only after years of ascent that investors can work up the courage to jump into these relatively young names despite a weakening trend. ...

When the herd pursues the more speculative stocks to the virtual exclusion of the Dow, it represents a breakdown in the established order and is at the very least a strike against the market's intermediate-term prospects.

Three months later, in March 2000, the NASDAQ topped and went on to lose three-quarters of its value. The Dow had topped in January 2000.

Why bring this up now, you ask? Because, although the markets never do the exact same thing twice, historical precedents do matter. Our latest, July Elliott Wave Financial Forecast looks at the current position of the "young names" in the NASDAQ vs. the "old names" in the DJIA -- and tells you what information about the future trend this indicator conveys.

Financial Markets: It's About Making Your Future BETTER

Investors don't put their money at risk because there's nothing better to do. They want today's financial decisions to bring a better tomorrow.

Alas, history shows that after a full market cycle has played out, most investors are worse off than when they started (Read a little book that published a century ago titled "One-Way Pockets" by Don Guyon. It's an eye-opener!).

Be the exception to this historical rule. Prepare for what EWI's analysts see developing NOW.

How the Stock Market Loves to Trick Investors

"Monster Reallocation" of Equity Inflows - But Is the Monster Safe?

Learn This Little-Known Insight About Stock Prices and Earnings