Epic, Worldwide Financial Complacency: "What a Difference a Decade Makes"

Financial observers return to the economically confident days of 2007

Here's what I'm talking about:

On Oct. 9, 2007, a headline published in the Wall Street Journal that said:

No Recession in Sight

Ironically, that was the very day of the historic stock market top, which was followed by not only a recession, but the Great Recession.

On Oct. 10, 2018, after the DJIA closed down more than 800-points, this headline appeared on the website of a Washington D.C. newspaper (Washington Examiner):

That opinion might turn out to be correct this time around versus 11 years ago. Then again, EWI has observed that such complacency is often a prelude to rocky financial and economic times.

Indeed, there are other signs of complacency, as depicted by this chart and commentary from our October Global Market Perspective: 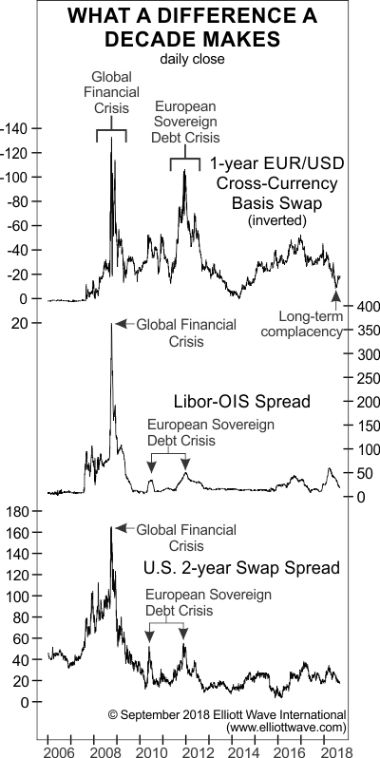 The top graph on this chart depicts 1-year euro-dollar currency swaps, which are contracts to exchange principle and interest payments over 12 months. (The scale is inverted to make the three graphs comparable.) In 2008, trust in the money markets evaporated to such an extent that virtually no one felt safe exchanging these debt payments. ... Two months ago, rates sank back below 10 basis points, indicating a widespread and pervasive complacency.

The middle chart of Libor-OIS paints another picture of business as usual, as does the bottom chart of the U.S. 2-year swap spread. ... In September, the spread fell to just 19 basis points, as the 2-year U.S. Swap Spread dropped to about 17.

This list of financial complacency signs is by no means exhaustive. EWI has observed and listed many more.

Plus, keep in mind that financial complacency is not the only factor that EWI studies.

Our global analysts are looking at debt levels, chart patterns of 40+ financial markets worlwide and the details of overall speculative activity. Moreover, they put all this "must know" information into a valuable historical context.

You are strongly encouraged to see what our global analysts see.

When Volatility Rattles Global Markets and Investors -- You Can Be Confident

It's a matter of being prepared -- AHEAD OF TIME. That's what our Elliott wave experts can do for you.

You see, they've studied the global stock indexes for four decades, and here's what they've learned: Chart patterns repeat themselves at every degree of trend. That means we can forecast the trends and turns of the 40+ global markets we cover.

Find out what our Elliott wave experts expect NEXT -- risk-free! Keep reading to learn more ...

Are Investors "Down to the Last Pennies"? See What the Data Shows

Why a Financial “Panic” May Be Just Around the Corner