Housing Crisis 2.0: Just Around the Block?

Back in 2006, the prevailing sentiment was that U.S. housing prices would just keep climbing. Many people thought buying a home was about as close to a "sure thing" as it gets.

But, as you'll well recall, the 2007-2009 financial crisis hit the housing market very hard. Formerly hot markets like Las Vegas and Miami saw prices plunge by up to 50% or more.

The time it took to hit a bottom was tortuous, not arriving until 2011, according to CoreLogic.

But, is another housing crisis just around the corner?

Well, the October 2018 Elliott Wave Theorist called attention to the price action in some key cities:

Las Vegas, San Francisco and Seattle had been booming as if property were bitcoins, but those booms are over, as cracks are finally appearing in the price structure:

The biggest property booms tend to turn on a dime.

At the high end of the market, the weakness is even more pronounced. In Vancouver and Toronto, for homes selling for more than $3 million, September sales fell 45% in Vancouver and 44% in Toronto from September 2017. For housing valued at $10 million and up in Manhattan, sales fell 39% while prices fell 9% from September 2017. Asking prices for the 500 most expensive U.S. properties are down more than $1 billion in recent months.

And, now, we have this January 22 update from CNBC (chart from koyfin.com): 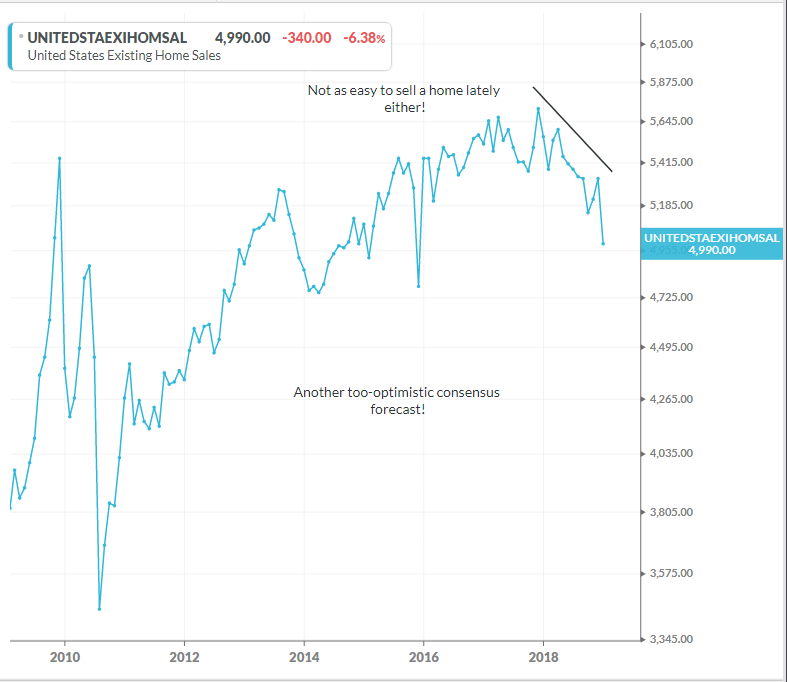 Real estate brokers are trying to figure out why sales of existing homes plunged in December.

The 6.4 percent monthly move was unusually large, regardless of direction. The tally from the National Association of Realtors usually moves in the very low single digits month to month.

So, what should you expect next for the housing market?

Well, our analysts have been watching markets for more than four decades, and they've observed that real estate prices tend to trend with stock market prices.

So, find out what our analysts are saying about the trend of the stock market.

Look below to learn how you can tap into their insights.

The Stock Market Does Not Need a "Reason" to Make a Sudden, Big Move

The history of the stock market is clear: the indexes have indeed made big price moves on days when there was no big news.

What's more, some trading days see price moves in the opposite direction of the headlines: In other words, stock prices rose after bad news, and fell when news was good.

Put simply: News and events do not drive market trends. Never have, never will. Yes, the market might have a brief emotional reaction, but then the main trend picks up where it left off.

Learn what our Elliott wave experts are saying about the stock market's next big move, so you can prepare.

Find out how to tap into their latest insights just below...

Why a Peak in Home Prices May Be Approaching