Elliott wave analysis or fundamentals? Only one prepped investors for the recent rallies in both crypto markets

February 22 is the birthday of our first U.S. President, George Washington. Of all the achievements and accolades attributed to the "Father of his Country," one of the most enduring stores about Washington is a complete myth; the famous anecdote of a 6-year old boy George chopping down his father's cherry tree was invented out of thin air by Washington's biographer.

It reminds us how some myths die hard. Like the one that has persisted in the annals of mainstream finance since before Washington was even alive: The myth claiming financial market price trends are driven by fundamentals.

Fundamentals is a fancy term for any news event in or near a listed market's backdrop, be it related to weather, politics, economic data, scientific developments, corporate restructuring plans and so on.

According to the myth, when those events are positive, the market rallies; and when they're negative, prices fall.

Though, that is rarely the case.

With RIOT's stock price locked in a sideways trend below $2 since November 2018, there was little fundamental reason to suspect an upside break out.

And yet, on February 8, our Cryptocurrency Pro Service analyst Tony Carrion did just that. That day, in his Crypto Video Update, Tony paid no attention to the external news surrounding RIOT. Instead, he looked directly on the stock's price chart where a bullish, Elliott wave pattern was underway: a third wave rally.

In Tony's own words:

"If we're right, there's awesome potential for a much higher move for the stock. So keep that in the back of your head."

What happened next? From there, RIOT took to the upside, rocketing 50%-plus in 10 days.

In that time, on February 15, Tony recorded another Crypto Video Update in which he showcased a second Nasdaq-listed crypto mining company, Marathon Patent Group (Ticker symbol MARA). Tony identified the same bullish, third-wave set-up on MARA's chart as he saw on RIOT's a week earlier and called for a "nice rally above the 59 cents level. You'll want to have this on your radar screen if you trade in the equities."

MARA followed in RIOT's footsteps and rallied over 40%.

Watch an exclusive clip from the February 8 and February 15 Crypto Video Updates to see and hear Tony's analysis of both markets first hand. Simply press play and enjoy: 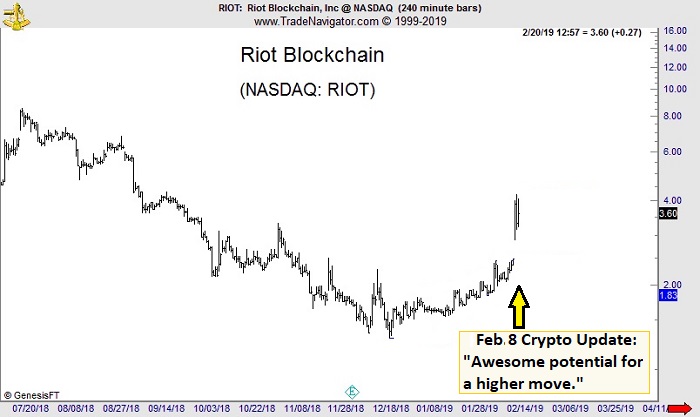 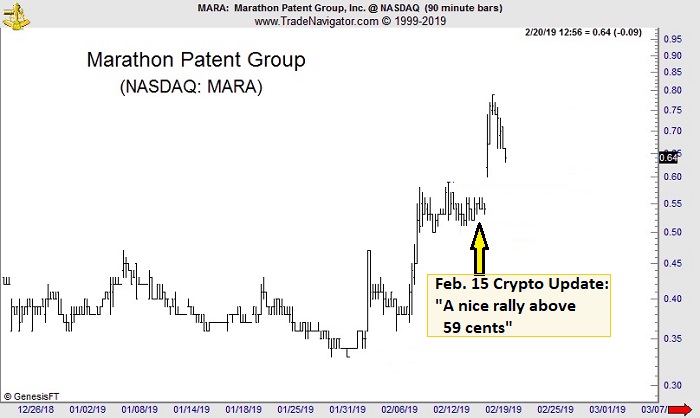 Elliott wave forecasts don't work out this nicely every time. No method of financial forecasting does. But what Tony Carrion and all our Cryptocurrency Pro Service analysts strive to provide that no other can is an objective assessment of high-confidence trade set-ups in the world's leading crypto markets -- before they occur.

Subscribers know: Since we launched our Crypto Pro Service back in 2017, we've steadily added to the number of cryptos we forecast intraday and daily.

Bitcoin and the gang have offered speculators lots of dramatic opportunities lately.

Our subscribers have kept ahead of many -- when most traders were blindsided:

Most traders get run over by these big crypto swings.

With Elliott waves you can be calm, prepared -- and ready to act.

If it's an important crypto, you'll be on top of it

1. You Get Analysis Through the Day

Your Crypto Pro Service subscription puts a team of crypto experts in your corner. Their goal is to make sure that day-by-day, hour-by-hour, you have the very latest Elliott wave projections. We provide you with crypto forecasts several times a day so you can get in front of intraday moves -- as well as longer-term opportunities for these markets:

Your Pro Services team scours the crypto markets for dramatic set ups for you. Each is a market that has reached a low-risk, high-reward juncture in its wave pattern. You'll find them in the Opportunities section of your Pro Service portal.

Once a week, your crypto analysts record a video to help you prepare for the week ahead. Sit back and watch as our analysts reveal the markets that are on their radar and that should be on yours. These videos add up to unparalleled, essential perspective for all serious crypto followers.

Our Crypto team is your Crypto team. If you have a question about the wave principle or our analysis, just send us an email. A team member will get back to you. If it makes sense for the answer to be shared with your Pro Service peers, we'll do so, confidentially of course. If you're having a hard time grasping an Elliott wave concept, our Educational Consultant will find the best resource for you and send it along. We know that we're successful when you are successful. We do everything in our power to make sure that happens.

Get Both Intraday and Daily Coverage

Cardano: From 3-Year Low To 2-Year High To 3-Month Low

Silver: Is the Fast Sell-off Over?

USDJPY: A Series of Fortunate Events Caused the Yen's Near-Term Surge -- Or, Did It?

EURGBP: Did the "Brexit Row" Really Push the Pound to a 6-Month Low? (Fat Chance …)