Falling Trade Deficit is Good for Stocks: True or False?

The correlation among the stock market, economy and trade deficit might surprise you

On March 27, CNBC said that "the U.S. trade deficit fell much more expected in January to $51.15 billion, from a forecast $57 billion. The decline of 14.6 percent represented the sharpest drop since March 2018..." This brings to mind the conventional wisdom that says a falling trade deficit is good for stocks and vice versa. Let'explore whether this widely held belief about trade deficits and the stock market is accurate.

Sounds like common sense, but the price action of the main stock indexes often defy reason.

The U.S. trade deficit fell much more than expected in January to $51.15 billion, from a forecast $57 billion.

Even so, on the day the news was released, the main U.S. stock indexes closed lower.

Over the years, countless investors have been baffled when the stock market has risen on bad news and fallen when the news was good.

And, many investors might also be surprised by the correlation between the trade deficit and stock market prices.

The evidence is easily demonstrated.

Let's do so by presenting news items and then providing Robert Prechter's contextual comments in brackets, courtesy of his 2017 book, The Socionomic Theory of Finance :

"... the trade deficit is an economic disaster," said [a] chief economist. [An eight-year boom was just getting going.]

The better-than-expected trade performance sent many economists scurrying to revise their trade forecasts. [A recession started a month later.]

The nation's trade deficit narrowed by 11.4 percent in December. [The stock market was peaking and collapsed to new lows in October.]

[A chief economist] said that the smaller December trade deficit will help to boost overall economic growth. [The second-worst financial crash and economic contraction in a hundred years were already underway.]

But, as we know, the economic recovery continued.

The Socionomic Theory of Finance also has this chart with the commentary below: 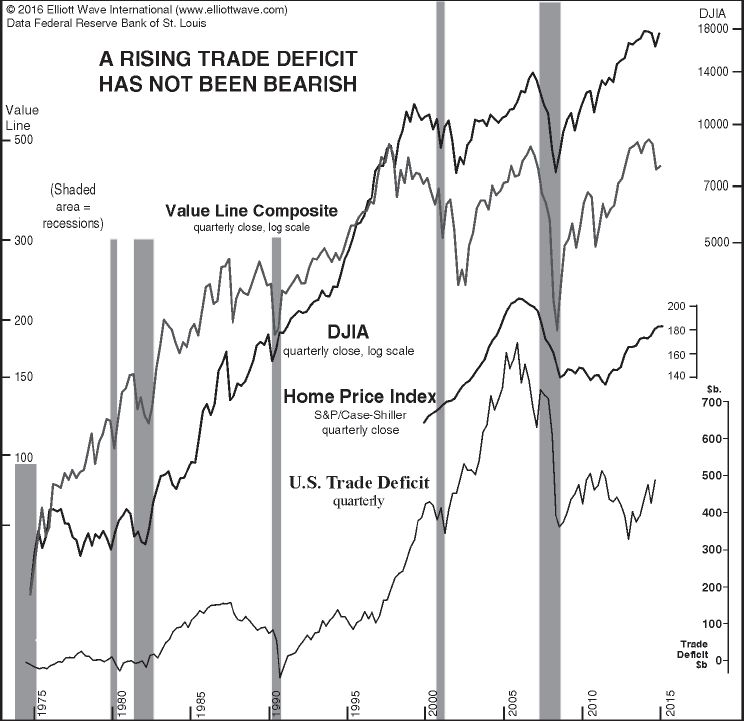 The chart reveals that had economists reversed their statements and expressed relief whenever the trade deficit began to expand and concern whenever it began to shrink, they would have quite accurately negotiated the ups and downs of the stock market and the economy over the past 40 years. The relationship, if there is one, is precisely the opposite of the one they believe is there. Over the span of these data, there has been a consistently positive--not negative--correlation among the stock market, the economy and the trade deficit.

Learn about other market myths in the the free report, "Market Myths Exposed."

Already a member of EWI?

If so, then you're all set. Thank you for being a member of our community! Here's how to access:

Why a Peak in Home Prices May Be Approaching