Most people who grew up in the mid-20th century thought of their house as a home, not part of a "market."

Yet for the past generation or two, buyers see a house purchase as an investment... and a place to live. In turn, prices reflect the same psychology as other financial market assets. This includes significant price fluctuations.

In other words, even though the article reported that "the number of U.S. metropolitan areas experiencing booms in real estate prices spiked 72 percent in 2004," homeowners shouldn't worry about a coming bust.

Yet, we know that the U.S. housing market did indeed peak a year later and go into a tailspin as the Great Recession deepened. Housing prices did not bottom until early 2012.

By January 2017, the U.S. National Home Price Index exceeded the 2006 high, according to the Federal Reserve.

Are we in another real estate bubble? Well, there's no doubt that the market has seen a "boom," which brings to mind this quote from the October 2018 Elliott Wave Theorist:

"The biggest property booms tend to turn on a dime."

Plus, the November 2018 Elliott Wave Financial Forecast showed this chart of the S&P Supercomposite Homebuilding Index and said: 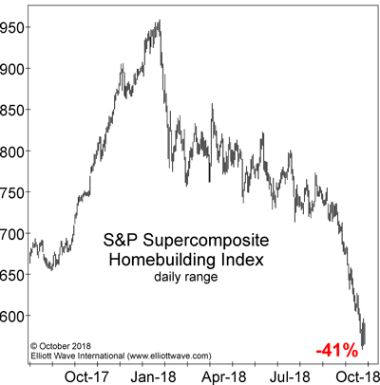 A burgeoning deflation is unmistakable in the real estate market.... Readers may remember that it was a 2005 turn in homebuilding stocks that helped the Elliott Wave Financial Forecast anticipate the larger bear market.

EWI's analysts are not surprised by the latest real estate news.

This is from the Wall Street Journal (April 1):

After 12 years of trying, the rapper finally unloads the 52-room Farmington property, which includes a night club, for $2.9 million.

And, on April 2, CNBC had this headline:

Now it's time to find out what our Elliott wave experts anticipate next for real estate and stocks -- and also for gold, silver, the U.S. dollar and the economy.

Look below to find out how you can get specific forecasts without any obligation.

How to STAY AHEAD of the Investment Crowd

A one-step advantage is all you need to stay ahead -- and that step is, follow the market's Elliott wave pattern.

You see, the patterns of crowd behavior have repeated throughout market history. If you know the pattern today, you can anticipate tomorrow (and beyond) with a high degree of confidence.

Our Elliott wave experts will explain to you the chart patterns they see in the Dow Industrials, S&P 500 index, NASDAQ, Treasury bonds, gold, silver, the U.S. dollar and more.

You can take up to 30 days to explore all of this analysis without any obligation. That's plenty of time to soak it all up. A very good deal!

Learn how to get started, just below …

What a Major Indicator of “Housing Busts” is Showing Now

Economic “Hurricane”: Here’s a Take on a Bank CEO’s Warning

This is “Anything but Positive for Housing”