Forget research. “Get it and forget it” is the new way to invest

Passive investing has become an ever-more popular way to play financial markets. A prime example is buying a fund that mirrors the S&P 500.

The presumption is that no research is required to enjoy stock market benefits. Just buy the market because, well, the conventional wisdom says that it always goes up in the long run.

A chart and comment from our June 2017 Elliiott Wave Financial Forecast clearly indicates the degree to which investors have acted upon this conventional wisdom: 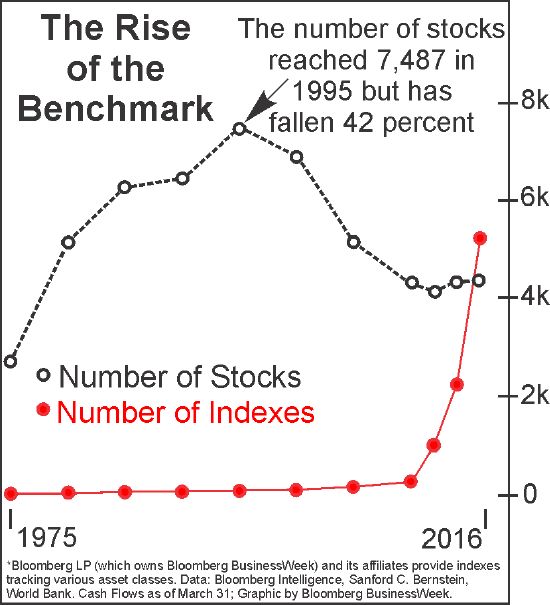 The chart shows just how popular indexing has become. Since 2010, the number of index funds jumped from 250 to more than 5000, which is more than the total of 4,333 companies listed on U.S. exchanges.

Our October 2017 Elliott Wave Financial Forecast followed up by saying:

Stock picking is considered a fool's errand; thus the run into passive investing via exchange-traded funds.... In the third quarter [of 2017], passive funds took in a record $510 billion, that's twice as much as they took in for the entire year in 2012.

So, the latest figures about passive investing are not at all surprising. Here's an excerpt from a June 28 CNBC article:

Passive investments such as index funds and exchange-traded funds control about 60% of the equity assets... according to estimates from J.P. Morgan.

[The CEO of a capital firm] has taken a shot at passive investing, saying it is causing widespread problems in global stock markets. He called it a "herding behavior."

EWI agrees that the stock market is driven by "herding behavior," and financial history shows that the "herd" is always on the wrong side of the market at major turns.

Our June Elliott Wave Theorist provides an in-depth review of financial herding -- and, equally important, gives you an update on the roadmap the stock market has been following very precisely since late April.

In fact, the new Theorist updates you on that map all the way into the year 2021. Not many market forecasters can match this foresight. For that reason, the July Theorist may very well be the most useful financial publication you read in 2019.

You can have it on your computer screen in moments without any obligation. Look below to find out how.

The quote above is in the July Elliott Wave Theorist -- and when you read it, you'll know exactly why Robert Prechter chose those words.

His discussion of this "historical rarity" includes key points about key financial markets.

And with the valuable insights that the latest Theorist offers, you'll be in a position to prepare for what's next.

FYI: The Theorist pays special attention to stocks and gold with eye-opening charts.

Are Investors "Down to the Last Pennies"? See What the Data Shows

Why a Financial “Panic” May Be Just Around the Corner