Take a look at this classic "bearish technical reversal pattern"

Most investors believe a company's stock price follows its "fundamentals," like earnings, sales, shifting macro-factors and so on. And often, it's true.

But, the December 2018 Elliott Wave Theorist reminded subscribers that, especially for the market in aggregate,

That can be very true for individual company stocks, as well. A case in point is German conglomerate BASF, which is not only the world's largest chemical company, it's also involved in plastics production, crop protection, auto emissions, battery technology plus oil and gas exploration.

Well, on July 8, BASF reported a 30% drop in adjusted annual operating profit. A 4% drop in the company's stock price happened to coincide with BASF's profit warning.

Here are some of the news reports from July 8:

Notice that all of the news articles pointed to fundamentals to explain BASF's profit woes.

But one of EWI's global analysts argues that the cause is not fundamentals, but something else -- namely, investor psychology. This chart (wave labels available to subscribers) and commentary is from our August Global Market Perspective: 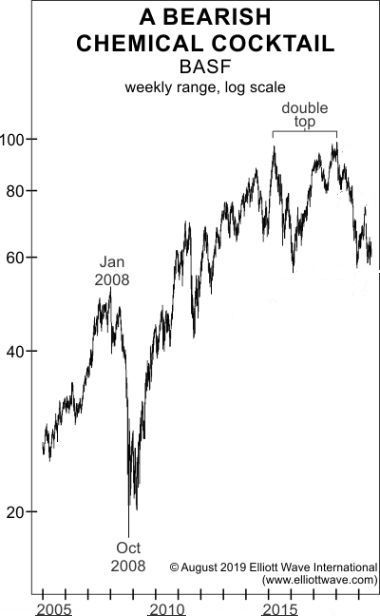 The fundamentals were destined to deteriorate ever since prices peaked near 100 in May 2018. In fact, that high formed a bearish technical reversal pattern known as a double top, and prices have since traced out [an Elliott wave pattern]. As we have said before, stocks are a leading indicator of social mood, which is why corporate weakness follows stock-price weakness.

Our analyst goes on to mention where he expects BASF's price to go next.

This forecast is based on the Elliott wave model, which all of our global analysts use to keep Global Market Perspective subscribers ahead of price moves in 40+ markets worldwide.

Learn how you can tap into their insights now -- without any obligation. Look below for details.

Globalization has become a controversial subject, but shrewd investors know: The way to greatly expand your investment options is to go west.

Or east. Or south, or north – go anywhere, just go outside your own borders.

Every month, our global Elliott wave experts bring you their new insights into opportunities (and risks) across 40+ most-watched markets worldwide.

It’s all inside our monthly Global Market Perspective.

BONUS: The August issue also gives you 5 super-short, hard-hitting videos from our top 5 analysts where they show you, with charts, where the next likely global opportunities are.