Experienced Elliott wave practitioners know what a "third of a third" means. Indeed, it's one of the most exciting phrases in the world of Elliott waves.

Keep in mind that Elliott waves in financial market charts develop at all degrees of trend. Just to mention a few examples, one wave might extend for a week, another for a year and a long-term wave might extend for several decades. There are much shorter timeframes -- e.g., daily and even intraday. The wave patterns are the same regardless of the scale.

With that in mind, let's consider a "third of a third" in the price chart of the 30-year U.S. Treasury bond, which covers a relatively short timespan -- and, what has unfolded since.

This is from our Aug. 30 U.S. Short Term Update (wave labels available to subscribers): 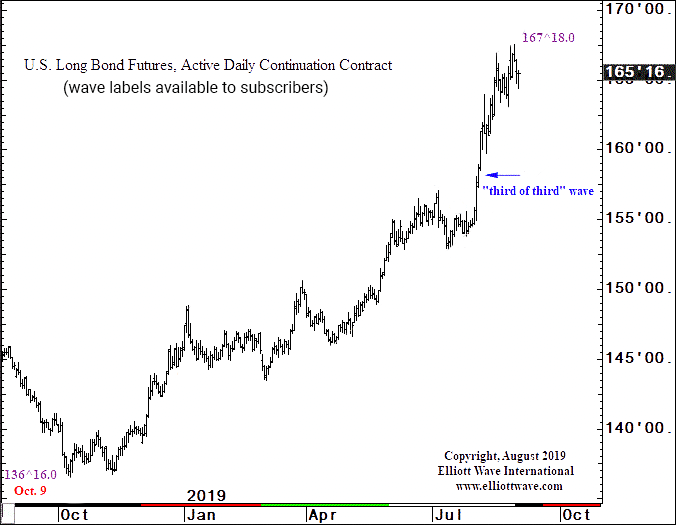 That issue of the Short Term Update also characterizes this shift in price behavior and makes a comment about momentum. Moreover, subscribers learn what our Short Term Update editor expects will be the exact signal that will confirm a major trend change.

When that exact signal is flashed, our editor will shortly thereafter let subscribers know. You don't want to miss this alert because the following move in 30-year Treasury bonds should be big.

You can review our analysis without any obligation for 30 days. Look below to learn how to get started.

If you are new to Elliott wave analysis, these three words represent big-picture degrees of trend in the stock market's chart pattern.

In the just-published September Elliott Wave Financial Forecast, you'll find clearly labeled Elliott wave charts of all three trend sizes. The Supercycle chart starts in the late 1920s / early 1930s and stretches to the present. The Cycle trend chart shows the price pattern of the Dow Industrials since the 1970s and the Primary degree chart starts in 2009.

Review them and get our analysts' commentary, risk-free for 30 days. Learn how to get started, just below …