Steering toward the next financial crisis?

Before the onset of the historic 2007-2009 financial crisis, our April 2007 Elliott Wave Financial Forecast saw the writing on the wall:

The bursting of the credit bubble will be the key fundamental effect of [the next big stock market downturn]. It will make a grand appearance in coming months, [and] is rooted in a succession of easy money episodes [such as] nothing-down, low-rate balloon mortgages, pay-me-later car loans, record high junk bond issuance and a dizzying array of credit derivatives...

Six months later, the DJIA topped, and the Great Recession followed. It was the worst economic downturn since the Great Depression.

Well, 12 years later, our April 2019 Financial Forecast issued another warning, which included the results of "easy money" for auto loans. Here's a chart and commentary: 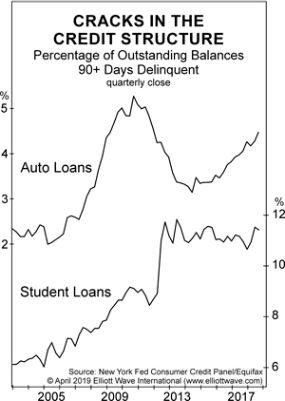 According to Bloomberg, U.S. student loan delinquencies hit a record high of $166 billion in the fourth quarter of 2018. The story is the same for auto loans. The Federal Reserve stated on February 12 that a record 7 million Americans were 90 days or more behind on auto loan payments. Delinquency rates as a percentage of total outstanding balances are also significant.

Now, here's the latest from an Oct. 25 Wolf Street article:

Of course, the fact that subprime auto loans have "blown up" doesn't mean that a financial crisis will develop next month.

Remember, in 2007, the stock market topped and then turned down before the Great Recession. So, keep an eye on the stock market for a big clue as to the approximate timing of the next economic downturn, or an outright financial crisis.

And, although the "cracks in the credit structure" are already growing wider, in 2007 it was the stock market's Elliott wave structure that helped us guide subscribers more than any other indicator. We are guiding them now, as well.

Look below to learn how to catch up on our latest big-picture research, risk-free.

Pay Attention to the Stock Market's NEXT Wave

The stock market's price pattern unfolds in 5 waves in the direction of the main trend.

You can invest with confidence if you know where stocks are in this basic Elliott wave framework.

Risk-free, let our Financial Forecast Service help you get there.

I'd like to learn more about the Finanical Forecast Service