Excerpted from the July 2020 Socionomist. As always, we strive to comment on important social trends from a socionomic perspective with no intent to judge any reader's personal values or preferences.

If you've read the news over the past month, you've seen no shortage of comparisons between 2020 and 1968. Scores of articles have chronicled the parallels between these two turbulent years. Both years featured widespread protests, a global pandemic, a contentious presidential election, a ferocious stock market rally and historic space success. Our purpose in this article, though, is not to detail the histories of these years and their similarities but rather to discuss why the similarities exist and what they suggest about the probable path of the social mood trend.

Recent issues of The Socionomist have discussed the consequences of a falling transition, a phase in which the social mood trend is shifting from positive to negative. We've specifically drawn cultural, political, economic and financial parallels between the present and 1966-73 and the late 1990s. See the April issue for an overview.

A hallmark of a falling transition is that a window of opportunity exists for significant, even extreme, positive mood and negative mood manifestations to come to the fore simultaneously. The resulting volatile mix can confound a typical observer, but it is precisely what a socionomist expects.

Within the 1966-73 period, 1968 is not only the most similar culturally to today but potentially the most similar in the stock market as well. In 1966, the Dow Jones Industrial Average registered a peak in a multi-decade uptrend, fell sharply and then rallied into 1968.

While the rally in the Dow fell short of a new high, a secondary index, the Value Line Composite, soared to numerous record closes before joining the larger-degree downtrend by year's end. (See Figure 1.) As Robert Prechter explained, "The Value Line Composite index mirrors the experience of an investor who owns equal amounts of randomly selected stocks, which is an excellent reflection of most individual investors' portfolios."

Some cultural developments during 1968, such as the first successful crewed Apollo spaceflights, were eventual manifestations of the previous long-term positive mood trend. Other developments, such as the assassinations of major political figures and the rise in social discord, reflected the still-emerging negative mood following the 1966 high. Others still, such as the stock market's rally, reflected a short-term resurgence in optimism amidst the larger-degree negative-mood trend.

In 2020, the Dow Jones Industrial Average has once again fallen sharply and then rallied strongly off its low while lagging another index, this time the Nasdaq 100, to new highs. (See Figure 2.) And once again, the protests and broader discord reflect negative mood, the crewed spaceflight success is an eventual manifestation of the prior large-degree positive mood trend, and the stock market's rally reflects the recent resurgence in optimism.

As the March 2020 issue of The Elliott Wave Financial Forecast explained, even global social mood trends and some of their manifestations are similar to those of 1968:

The Hong Kong flu, which killed 70,000 in the U.S., accompanied the speculative peak of 1968. Then, as now, a disease that originated inside of a well-established Asian bear market, spread to the U.S. as a bull market expired. This is another example of many extra-market parallels to 1968, when there was a similar cultural tipping point.

One important difference for those of us living through these changes in real time is that the 1966-1968 transition occurred over three years, whereas 2020 has witnessed a similar transition in a matter of months. The swiftness is breathtaking. Consider that as recently as February, less than five months ago, much of the world carried on with business as usual. Since then, world stock markets cratered, pandemic lockdowns swept the globe, the Federal Reserve and Congress panicked and ran through their entire 2007-2009 playbook in mere weeks (implementing most of the measures after the stock market's March low), unemployment soared, the stock market rebounded, oil prices went negative, COVID-19 cases began to fall, lockdown measures eased, street protests erupted, the NBER declared a recession had begun in February, the stock market wavered and COVID-19 cases bounced back. If you feel like you've lived through several years' worth of history in recent months, in some sense, you have.

As Figure 1 shows, 1968 was followed by a sharp decline in the stock market into a low in 1970. Cultural trends began to resolve more squarely toward the negative as well, though mood remained mixed. Social discord persisted, the Vietnam War accelerated, the National Guard killed unarmed students at Kent State, the Weather Underground formed, pop music embraced harder-edged sounds, the Beatles broke up and movies became grittier. Yet a handful of positive-mood expressions managed to come to the fore, such as the Apollo 11 mission that landed humans on the moon and the embrace of peace at the Woodstock festival.

While the current mood trend has adhered closely to the 1968 script thus far, it remains to be seen whether it will continue to do so. Elliott Wave International's market forecasting publications will keep you updated on the details regarding the probable course of the financial markets. As always, if you keep your eye on the stock market, you'll have the best chance to foresee the coming tenor and character of social expressions.

As wild as this year has been, it will get even wilder if mood becomes more negative. Brace for or work to enact social change, as suits your preference. On the other hand, if the resurgence in positive mood continues, then the openings for dramatic changes to the status quo will become narrower, only to widen when the negative mood trend reasserts itself in earnest.

Why was the world so unprepared for the pandemic? 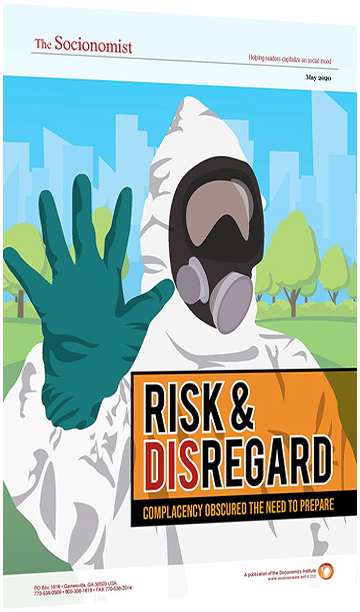 The COVID-19 pandemic is among 2020’s defining features, in part because the world was so unprepared for it. Pundits blame leaders, institutions and the unavailability of information. But the May 2020 issue of The Socionomist goes deeper to reveal the true source of society’s complacency. It also illuminates how to use the stock market to identify when further risks to our lives and livelihoods are likely to intensify.

Join Club EWI and unlock tons of free reports, videos, forecasts and more – designed for investors like you.