Prepare Now for a Brutal Austerity – Here’s Why

Here’s what’s holding together a “global house of cards”

When financial times get tough, you hear the phrases "tightening our belts," "cutting back" or "making do with less."

Those are common phrases to describe the word "austerity."

If spending and borrowing had been done with moderation when times were good, then the tough times would not be as tough -- or austere.

Instead of "moderation," the best word to describe what's going on in the U.S. now is "excessive," as these headlines attest:

Individuals, corporations and governments find it difficult to be financially frugal when interest rates are exceptionally low.

Here's what our August Global Market Perspective has to say: 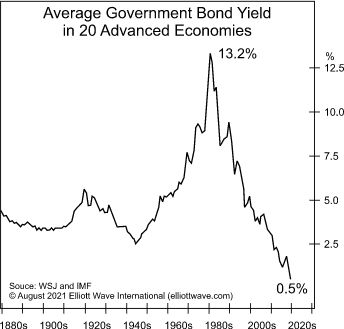 We have little doubt that it will take a long period of austerity to correct the world's multigenerational debt binge...

The chart illustrates the interest-rate environment that holds together this global house of cards. In July, the average interest rate across 20 [advanced] economies fell to 0.5%, a new low (by far) dating back at least a century.

Indeed, according to at least one source, rates are as low as they've been in 50 centuries. 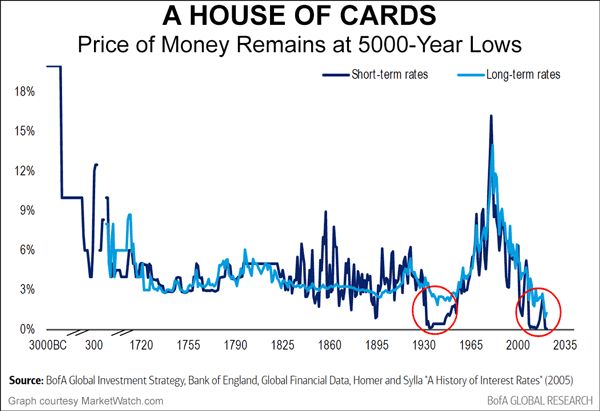 This chart is a version of one published by Sidney Homer and Richard Sylla in their 2005 book: A History of Interest Rates. Astoundingly, it shows a potential 5,000-year low in both short-term interest rates and long-term interest rates.

When interest rates start to rise, and it becomes difficult to service debt, a brutal austerity will be the order of the day.

As you might imagine, the best course of action -- especially at this juncture -- is to refrain from assuming debt and to save as much cash as possible. When austerity reigns, cash will be king.

Another course of action is to learn what the Elliott wave model suggests is next for interest rates (or bond yields).

Our global Elliott wave experts will inform you instantly when you subscribe to our Global Market Perspective. Just follow the link below.

Anyone can spot the current trend in a financial market.

Indeed, most investors assume that today's trend will carry into tomorrow. That's why they're caught off guard when the trend turns.

How do you avoid extrapolating the current trend into the future? Identifying the Elliott wave pattern helps you anticipate turns.

The Wave Principle's basic pattern includes five waves in the direction of the larger trend, followed by three corrective waves.

Thus, when a trend has unfolded in fives waves, you know to prepare for a turn.

Learn about the key global financial markets that appear on the cusp of major trend changes.

Follow the link below to learn about our monthly Global Market Perspective, which covers trends in global stock markets, cryptocurrencies, bonds, metals, forex, metals and much more.