“Aussie PayPal” Explodes Higher: These Were the Warning Signs

Even in “exotic” markets like Australian stocks, the same Elliott wave rules apply

When a stock falls, do you feel the urge to buy it? Few investors do. Yet, it's precisely at moments like these when Elliott waves can help you spot an opportunity, even in markets that are off the beaten path.

First, keep in mind these two quotes from the Wall Street classic book, Elliott Wave Principle, by Frost & Prechter -- here's the first one:

The primary guideline is that corrections ... tend to register their maximum retracement within the span of travel of the previous fourth wave of one lesser degree.

Here's the other quote from the book:

Next, here's how knowledge of these two Elliott wave insights was applied to an Australian stock. This chart and analysis is from our June Global Market Perspective [entire wave labeling available to subscribers]: 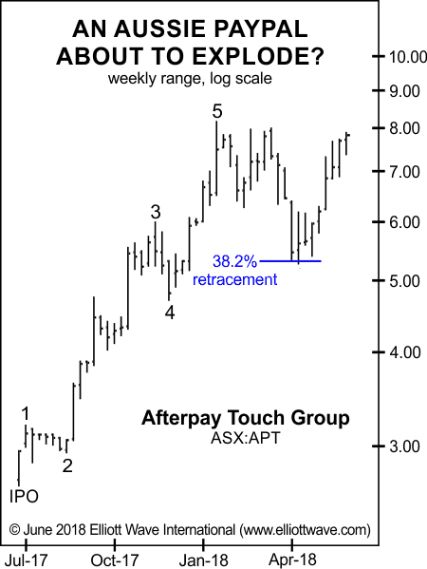 Best described as an Aussie version of Paypal, Afterpay's startup business is on track to explode from only $23 million in sales in 2017 to $122 million by the end of 2018, according to estimates compiled by Bloomberg. The stock tripled after its IPO in June 2017 while tracing out five waves up. Then followed [a downturn] to the 38.2% retracement level, which put the stock in the range of its previous fourth wave of lesser degree--where corrections typically end.

Indeed, it did turn out that the 38.2% retracement level was where the correction ended.

Not only that, but since that Global Market Perspective forecast, the price of the stock has more than doubled (as of Aug. 23).

As you might imagine, not every Elliott wave forecast works out perfectly, but many of them do -- and Australia's After Touch Group is just one example.

Keep in mind that our Global Market Perspective covers over 40 markets, and our analysts have identified other chart setups that appear to offer fresh opportunities now.

Are Your Eyes Open to These Worldwide Financial Opportunities?

You can team up with our global Elliott wave experts. They constantly scan the globe for high-confidence chart setups that others may miss.

Let them do the work for you as they search for opportunities in 40+ different markets.

Each monthly issue of our Global Market Perspective is jam-packed with actionable information about global stocks, rates, metals, energy and more.

Take a free look for 30 days. Details are just below …