How a Simple Price Pattern Foretold a New "Tech Boom"

Taiwan Semiconductor's U.S. traded shares more than tripled in value since this forecast

Just like no road map or navigation system is 100% reliable, neither is any analytical method. Still, some methods are simpler and more effective than others. One method that has proved its usefulness over the years are the classic chart patterns such as Elliott waves.

Let me show you how Mark Galasiewski, one of the editors of our Global Market Perspective, pointed out this pattern on a price chart back in February 2011, and then we'll discuss what happened afterwards.

First, here's that chart from nearly eight years ago, along with Mark's comments: 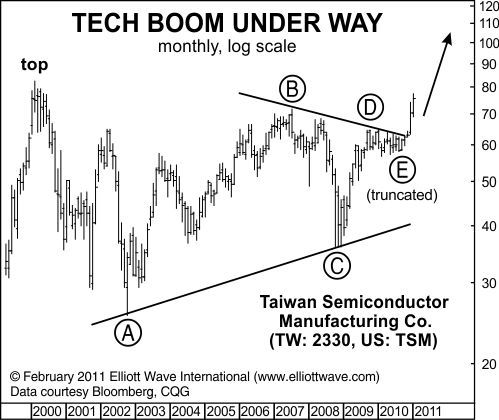 Taiwan Semiconductor Manufacturing Co. has broken out of its 10-year-long contracting triangle. Wave E of the triangle was shorter than we expected, so we will consider the triangle to be truncated. Truncations are rare, but for now we will take the triangle pattern at face value, because the vertical move of the past two months is consistent with the behavior of a fifth-wave thrust [higher].

The upward pointing arrow on the chart indicates Mark's forecast for higher prices.

The just-published January 2019 Global Market Perspective shows an updated chart, with an arrow pointing to when Mark made his 2011 prediction. Once again, here's Mark's commentary: 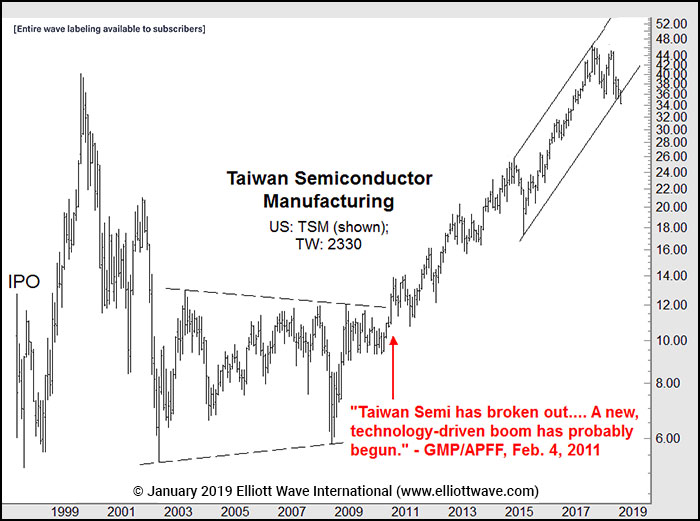 Taiwan Semi is the dominant player by far in the contract chip manufacturing industry... When the stock broke out of a large-degree contracting triangle pattern in early 2011, we said it meant that a new, technology-driven boom had probably begun.

In the January issue, our Global Market Perspective analysts have spotted other, fresh opportunities and are now sharing those with subscribers.

The good news is that you can learn about these opportunities through a 30-day, risk-free trial.

Look below to learn more.

EWI has helped more than one million investors understand the markets and prepare for price moves. Now, our research shows that recent big swings in stocks, bonds and oil are just a taste of what's to come. In fact, we're entering a period when global volatility will become the new normal.

Investors who know how to anticipate big moves in both directions will win big.

That's why we just released our brand-new, comprehensive learning experience:

If you think volatility requires investors to be more knowledgeable and active, you're 100% right. Our 60-day Global Volatility Track is designed to get you up to speed -- fast. It draws from our most popular forecasting service for global investors, plus two of our most famous market-timing educational resources. The track will help you see when and where the most powerful moves in the world will unfold, and how to take advantage of them.

This Wall Street Bestseller is the authoritative book on the Elliott waves that occur in all market prices. Hundreds of thousands of people around the world credit a portion of their financial success to this classic book.

Packed with updated, ongoing monthly analysis, opportunities and forecasts for every major market in the world, directly from the desks of our 15 market experts. You get the current plus next two timely issues.

The Global Volatility Track is a powerful combination of expert guidance and real-time analysis which, when combined, transforms you into a confident and ready global investor.

For a very limited time, you get the Global Volatility Track -- a $226 value -- for $98. A 56% discount. You get instant access to the entire track, including this month's Global Market Perspective. Then you get the next two timely issues as soon as they are published. After these issues, you'll receive GMP for the standard $49/month rate.

But act now because these markets will move. The only question is: Will you be as ready as you can be?