Pinpointing an Opportunity in This "Global Market Leader"

The technology boom that kicked into high gear in the 1980s and '90s is still going strong.

One of the many key companies has been Taiwan Semiconductor. Its client list includes Apple, Qualcomm, Nvidia and Advanced Micro Devices. As Barron's noted in October, these companies rely on Taiwan Semiconductor to "make the most demanding chips used in smartphones, servers, artificial intelligence applications and networking devices."

However, back in 2011, Taiwan Semiconductor's share price had been trading in a sideways pattern for several years. But one of our Global Market Perspective analysts noted a significant price chart development in February 2011 and said:

Taiwan Semiconductor Manufacturing Co. has broken out of its 10-year-long contracting triangle... The vertical move of the past two months is consistent with the behavior of [an upward] thrust.

Upward thrust, indeed. The stock price went on to approximately quadruple in value in the next six years.

The upward climb of Taiwan Semiconductor's stock price then paused. Was this the end of the bullish move?

Our January 2019 Global Market Perspective did not think so. Here's what our analyst had to say:

Taiwan Semi is ending [this] down wave... Tech boom to resume.

Take a look at this chart from our just-published November Global Market Perspective (wave labels available to subscribers): 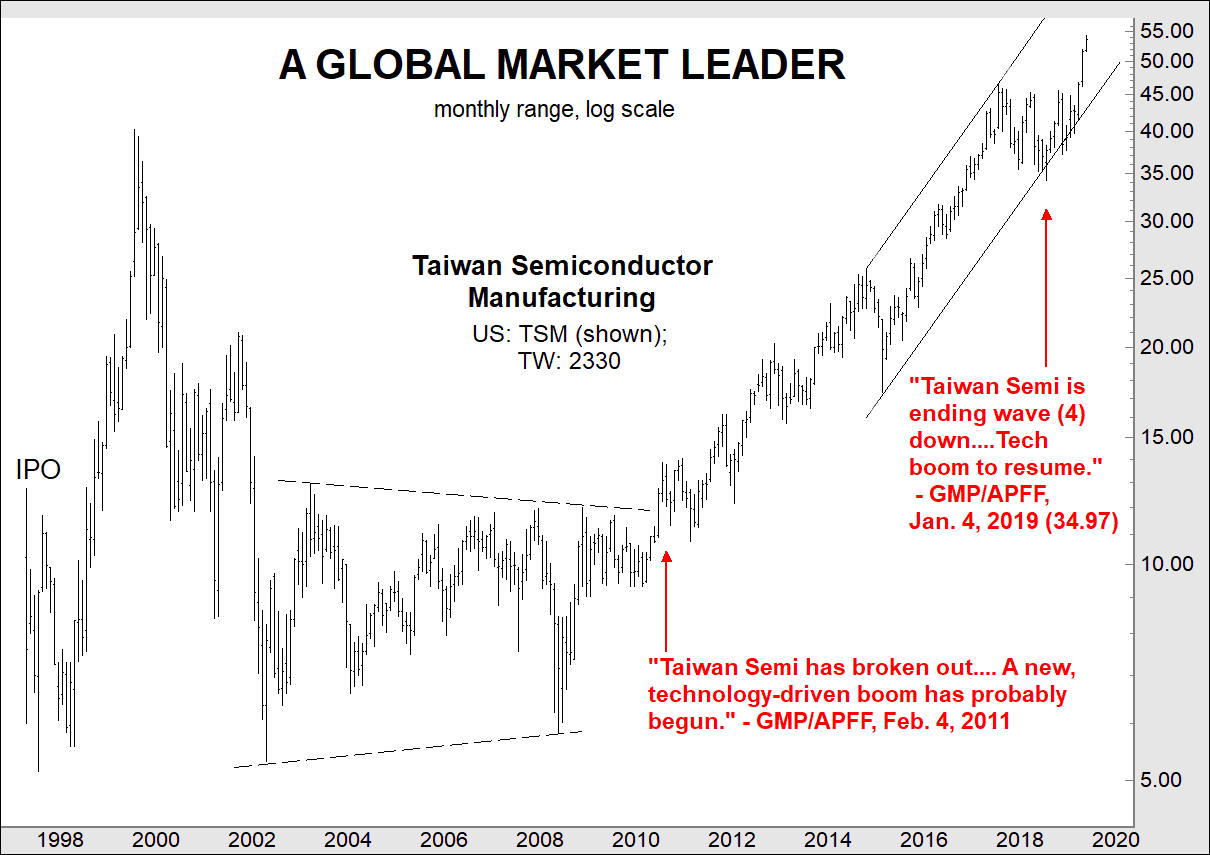 Here's what our analyst says:

This is just one example of the potential opportunities that our Global Market Perspective brings you each and every month.

There are many more that you can tap into now, via a 30-day, risk-free trial. Look below to get started.

Market Analysis: Which Method Do You Use?

"At EWI, we follow all legitimate wave counts for any given market in multiple time frames."

Remember, the Elliott wave method anticipates price moves. Of course, that means before they happen.

Your review of our global analysis is risk-free for 30 days.


Get a Team of 15 Market Analysts Working for You

You already know that having a global view of market opportunities is essential ... but having the time (and expertise) to analyze every major market in the world is impossible.

That's what our team of fifteen analysts do for you in Global Market Perspective. Our analysts intensively analyze their respective markets all day, looking for short term opportunities. But, at the end of each month, they zoom out and update their big picture forecast for their key markets.

We package their analysis into a comprehensive publication, appropriately called Global Market Perspective.

You get analysis and forecasts for every major market in the world from analysts who dedicate themselves to forecasting a group of markets. It's like having a whole department of specialized analysts working entirely for you.

Elliott Wave International's analysts have been featured on financial channels like :

We guarantee that Global Market Perspective will give you the essential analysis to spot the world's hotspots and danger zones.You'll be tuned in to global markets like never before. If you disagree, just contact us. We'll give you your money back. That's 100% risk free.

Read & watch the most recent analysis