Singapore: From Pessimistic to "Crazy Rich"

How sentiment supported a forecast for the Straits Times Index

The movie "Crazy Rich Asians" has made a big splash at the box office.

Largely filmed in Singapore, the message conveyed by the movie’s title is in stark contrast to what the investment community’s sentiment towards Singapore was two years ago.

This is a Sept. 29, 2016 article excerpt from the Singapore newspaper, TODAY:

Workers in Singapore are an unhappy and pessimistic lot.

The Republic has ranked the lowest in job happiness, and workers here are the most pessimistic about their jobs, according to a survey conducted across seven Asian nations.

But, as the saying goes, "it's always darkest before the dawn."

Our September 2016 Global Market Perspective picked up on that pessimism and saw it as a bullish sign: 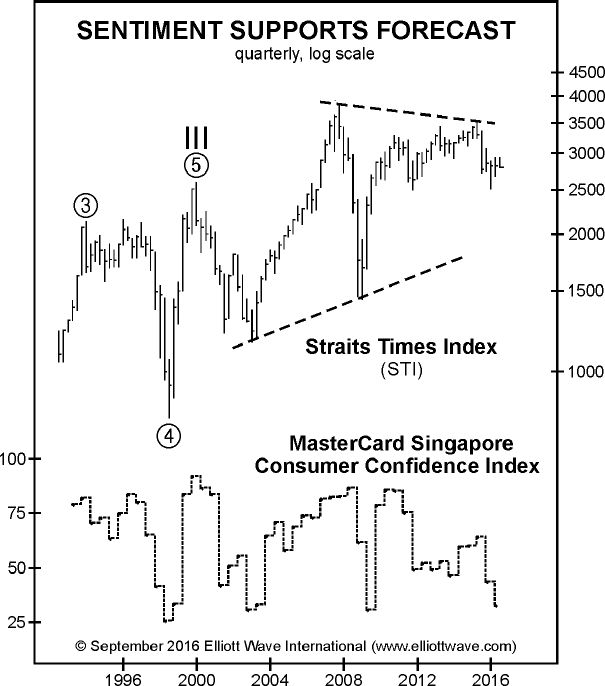 Sentiment, as reflected in the MasterCard Singapore Consumer Confidence Index, suggests that expectations in the nation may be near a bottom, which may support a price low in mid-2016. The mid-year poll for the survey showed that confidence had fallen almost as low as it did after the 1998, 2003, and 2009 lows in the Straits Times Index.

After two months of choppy, sideways trading, the Straits Times Index went on to register a nearly 28% advance from the time our forecast was made through April 27 of this year.

Singapore's stocks have retreated somewhat since April, but remain well above the low of 2016.

The lesson is that investment opportunity often presents itself at sentiment extremes.

Of course, this also works the other way around. When sentiment is overly optimistic -- watch out. That is often a signal that a downturn is nigh.

This applies to any market around the globe.

Right now, our global market analysts are reviewing the 40+ markets that our Global Market Perspective covers every month.

Once again, they are telling subscribers about potential opportunities that appear to be "ripe for the picking."

Would You Like to VASTLY EXPAND Your Investment Landscape?

If your answer is "yes," then you owe it to yourself to read our Global Market Perspective.

Every month, EWI's team of global market experts provide their analysis and forecasts for 40+ markets worldwide (U.S. included) -- all in one convenient publication.

Just know that the Global Market Perspective can't be skimmed front-to-back in three minutes. It offers serious reading for the serious investor.