If you think the yuan is controlled by the Bank of China, see this chart

Earlier this year, U.S. President Donald Trump took back claims that China is a "grand champion of currency manipulation." He doesn't believe in that label anymore.

But, it's gonna take a lot more than the leader of the free world to convince currency traders of the yuan's ability to move about freely.

Case in point, June 1. That day, the yuan soared to a seven-month high against the U.S. dollar -- a move that caught many bearish forex traders wrong-footed. Word is, the yuan was completely on track to weaken, that is until the People's Bank of China intervened with a new plan to "revamp the fixing mechanism" for the yuan's daily reference exchange rate against the greenback.

"Derailed by the PBOC" -- a common claim made disdainfully clear by this June 1 news source:

"This ugly, yet familiar, cat-and-mouse game between authorities and investors highlights the perils of trading the onshore and offshore yuan. This is a key factor why we have repeatedly noted our distaste for trading yuan." (CNBC)

Not in the least. See, we believe this notion of a rigged "cat-and-mouse game" is just an excuse for missing the yuan's major turns. It's not an explanation of facts, as my colleague Vadim Pokhlebkin proved late last year.

In his article, Vadim wrote:

"By definition, market manipulation means stopping the free-market forces from doing what they do best: setting a fair value of an asset that suits both the buyer and the seller. It also implies that the manipulated market is no longer predictable using trend indicators you would apply to other, freely-traded assets.

"So, does this mean that the yuan has been unpredictable? You be the judge."

Vadim showed a chart of 15 yuan forecasts subscribers saw over the past two years in our Sunday-Tuesday-Thursday Asian-Pacific Short Term Update, edited by Chris Carolan.

The chart made an airtight counterclaim: The yuan is a tradable currency. It is not governed by monetary policy, but rather investor psychology, which unfolds as Elliott wave patterns directly on its price chart.

Vadim ended his chart with the question: "What are you reading now?"

Today, we pick up where he left off, showing the continuation of yuan forecasts from our Asian-Pacific Short Term Update, edited by Chris Carolan. 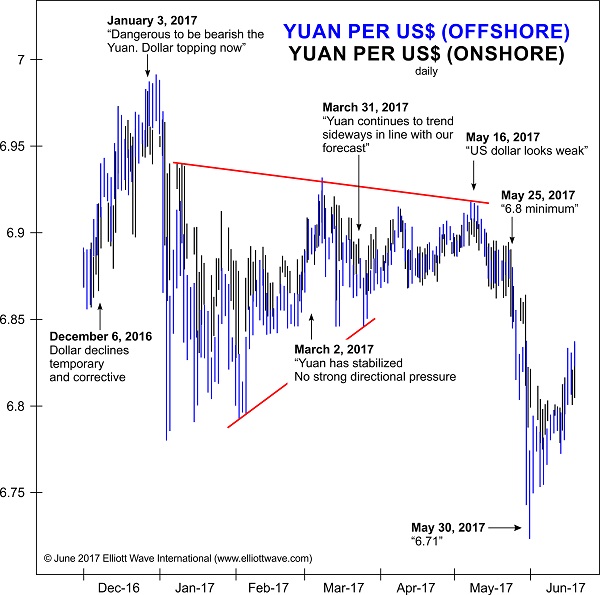 "The dollar is also pulling back short-term versus the Chinese yuan. Again, we think these dollar declines are temporary and corrective."

"We're now in wave five, of five, of five. So it's probably increasingly dangerous to be too bearish on the yuan here, just where we are coming in to a potential [dollar] top now..."

"The Chinese yuan has stabilized. The onshore and offshore rates are quite close now, indicating there is no particularly strong, short-term directional pressure on the yuan rate now."

"The inverted USD/CNY continues to trend sideways in line with our bullish forecast for the yuan."

"Over to the yuan, where there's been this long-running depreciation versus the U.S. dollar for a couple of years. We saw a big, strong counter-trend move at the beginning of the year, and we've just been trending sideways.

"But now it looks like U.S. dollar weakness is spilling over to China. I think there's potential for a roughly equivalent move of what we saw at the beginning of the year.

"Bottom line; The U.S. dollar looks weak and that weakness seems to be spreading and potentially accelerating and that may drive more money and funds into the [Chinese currency] market."

"The dollar is showing some of that expected weakness now. Minute wave c may not equal January's wave a decline, but we are looking for at least a print under 6.80 for dollar yuan."

"We have been anticipating dollar weakness and yuan strength for some time, based on our Elliott wave count... That decline is now occurring. The offshore yuan is currently stronger than the onshore market, indicating additional upward pressure on the yuan and downward pressure on the U.S. dollar. The 6.71 yuan per dollar level is an interesting, potential price target."

On May 31, the yuan offshore traded at 6.72, its strongest level against the U.S. dollar in seven months.

In Chris Carolan's own words:

"This real-time demonstration of Elliott wave's effectiveness highlights the Wave Principle's strength, that it is anticipatory, and not reactionary. As market participants, we are better off preparing for the next move instead of reacting to the last move."

Reclaim your taste for trading the yuan today! With our Asian-Pacific Short Term Update, the "cat-and-mouse" game of staying in front of the currency's next big turns meets the top dog of objective, Elliott wave analysis. 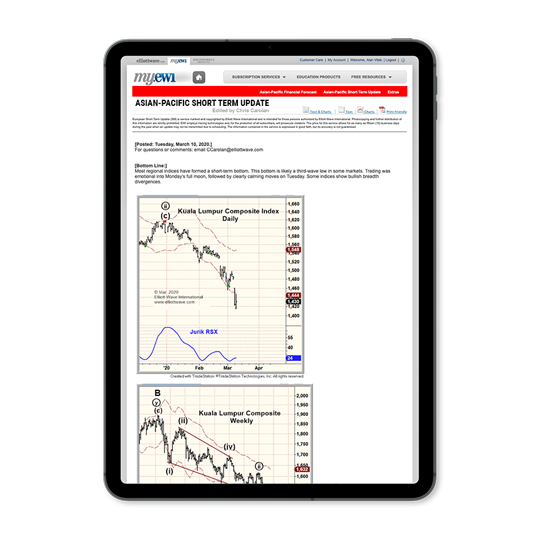 The Asian-Pacific Short Term Update keeps you ahead of the near-term trends that affect the big-picture, so you're prepared for opportunities on all time frames.You'll get clear, objective forecasts and analysis of all the major regional markets with chart-filled updates every Sunday, Tuesday and Thursday.

The Asian-Pacific Short Term Update keeps you ahead of the near-term trends that affect the big-picture, so you're prepared for opportunities on all time frames.You'll get clear, objective forecasts and analysis of all the major regional markets with chart-filled updates every Sunday, Tuesday and Thursday.