In this four-part series, we reveal striking similarities between today and previous important junctures in the markets. At those times, these activities fooled the vast majority of investors. They were like lemmings, following the prevailing sentiment.

These excerpts come from The Elliott Wave Financial Forecast’s Investor Psychology section. Each issue of EWFF includes this section, to set the stage before presenting forecasts for the US markets.

We hope it helps you see what’s going on and stay alert.

The Danger of Linear Projection

When a slew of book titles suddenly emerged in 1999 extrapolating a 17-year bull market up to Dow 36,000 through Dow 100,000, The Elliott Wave Financial Forecast called it a "mass fixation" that would likely be followed by a major stock market reversal. In March 2000, the S&P 500 started a bear market that would eventually cut its value by more than half.

The May 2018 EWFF noted the latest outbreak, which again reared its head last month as a prominent Wall Street money manager projected a Dow at "650,000 in 50 years." "I think the 6.5% annual growth in the market is going to continue, on average, for the next 50 years," he explained.

As we said last May, the codification of collective expectations tends to appear at or near a big top; investors get so excited about the stock market's returns that they "linearly project the past" into the distant future. It's clearly happening again, and this time even some old bears are on board.

One who gained renown by warning of financial weakness in March 2000 now concedes that there will be "no recession for at least three years." A USA Today columnist agrees, saying a 1929-style crash "isn't likely." His reasoning includes the following: "People have a much better understanding of how investing and the economy work. Investing knowledge has improved." In our view, it's quite the opposite.

During market environments like this, it can be tough for investors to stay the course and not get swept away in the herd.

Why “No Decision” Can Be the Wrong Decision

The conversion of the vast majority to a long-term bullish case is happening at exactly the wrong time. Some analysts with a keen sense of valuation and sentiment note the significance of the transformation. Alan M. Newman, editor of Crosscurrents, is a good example.

After years of injecting reason into an absurdly optimistic investment milieu, Alan delivered what possibly could be his swan song issue on November 4. It begins with a lesson EWFF subscribers are very familiar with, a comparison of the current market to that of 1968-1973. Newman calls it “the Groupthink environment that led to a 50% collapse” in 1973-1974:

Although the major indexes were enabled to continue modest gains [through January 1973], the broad market had peaked in 1968. The environment produced an almost religious reliance on only 50 stocks, dubbed ‘the Nifty Fifty.’ These became ‘one decision’ stocks; buy. That’s it. Just buy ‘em and forget about ‘em.

At this juncture, it’s even simpler, as “no-decision” exchange-traded funds seemingly allow investors to own a broad group of equities by buying just one stock. As of March, CNBC reported that passive investments accounted for 45% of all assets in U.S. equity markets, an 80% increase from 2009.

Newman’s concluding remark: Stocks are in their “most dangerous environment in history.”

During market volatility, it helps to have an experienced team of researchers working for you…guiding you.

The Government Has Power to Protect Us. Right?

“Government” is another frequently cited source of strength for the stock market. A recent column in USA Today maintains that it will “provide protections” and adds, “Policymakers including those at the Federal Reserve likely have learned their lessons.” This is another myth that is categorically false, in our view.

In fact, recent issues of EWT and EWFF have listed some of the many ways that global governments will exacerbate the next decline. The list ranges from piling on debt, intruding in lending markets, repealing restrictions on banks, executing trade wars, reducing mortgage rates below natural rates, quantitative easing and a Federal Reserve effort to re-liquify the market for interbank repurchase agreements.

To update an observation from last month’s issue, the repo market rescue effort is particularly instructive, because it now appears to have started ahead of the Dow’s impending high. As noted last month, the Fed did the same thing in August 2007, two months ahead of the Dow’s October top.

Also, consistent with the behavior during the last bear market, the commitment is already rising. On October 11, the Fed announced that it will extend its repo market purchases “at least through January,” buying $60 billion per month in U.S. Treasury Bills to support the effort.

Once upon a time, laissez-faire government policies allowed markets to find their own level. Markets always do, despite government meddling. But in 2019, government intervention is on the scene at the top. As EWFF suggested in September, its timing will prove “impeccably counterproductive” once again.

Markets will continue to follow Elliott wave patterns, regardless of intervention, trade talks, impeachments…. They always do.

Is the Market Lulling You?

Complacency is high, providing another strong similarity to 2007 near the end of the market’s rally. This predisposition is seen in the CBOE Volatility Index (VIX), which declined throughout the month of October, making a new three- month closing low at 12.30 on November 1.

Large Speculators expect this condition to continue. Large Specs are currently net-short 187,948 VIX futures contracts, a record bet that the VIX will not rise in any appreciable way. They made a similar bet in the last week of April, when the S&P 500 made a near-term closing high on April 30 and declined nearly 8% to June 3.

Another large bet on low volatility occurred the first week in October 2018, as the DJIA declined nearly 20% to December 26, 2018. A large net-short position by Large Specs in late 2017 occurred three and a half months before [the market] peaked in January 2018. So, the COT data is not always a short-term timing tool.

January 2018 is the month that the NYSE Composite Index recorded its all-time high and appears to be a key inflexion point, because every successive high and low in the Large Spec net-position since then is lower than the previous one. traders are becoming successively more certain that low volatility is here to stay. The chart above depicts epic tranquility. 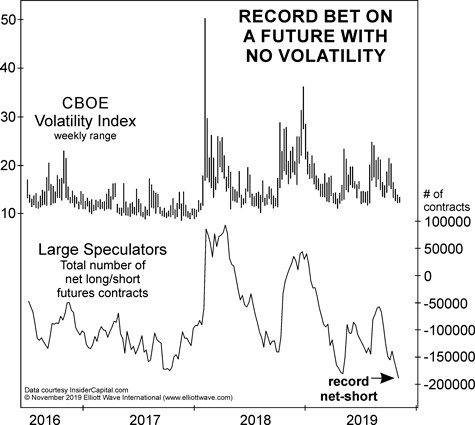 It's easy to become complacent when markets continue in one direction for a long period of time.

Our research shows that these are the times to be hyper-vigilant about what's to come.

The Elliott Wave Financial Forecast gives objective research and forecasts for US stocks, bonds, gold, the dollar and much more. EWFF has a track record of being the voice of reason in an otherwise exuberant crowd.

It’s completely risk-free to try it.