Commodities and the “Art” of Elliott Wave Interpretation

Have you ever looked at a price chart of a particular commodity market and thought you'd have better luck interpreting your five-year old's latest scribble drawing?

Your kid: "No! It's a giraffe standing next to an apple tree" -- obviously!

Our very own senior analyst and Commodity Junctures Service editor Jeffrey Kennedy knows this feeling all too well. Once he even described the squiggly lines of price action on a chart as a "Jackson Pollock painting."

But that's where Elliott wave analysis steps in, providing you with an objective lens to see that price action through. It helps you make sense of this seeming mess by dividing price action into two wave categories:

Most Elliotticians thank their stars when they see an impulse -- versus a corrective pattern -- unfolding on a price chart. That's because impulse patterns have the wind of the trend at their back. For this reason, they are often smooth, strong and easy to identify.

Corrections, on the other hand, go against the grain; therefore, they are often time-consuming, choppy and complex.

Within an impulse, there's one crowd favorite that truly gets the heart racing; the one Ralph Nelson Elliott himself called "wonders to behold." That pattern is the third wave.

Think of every other impulse wave as a cute chimpanzee. Third waves are King Kong in comparison as far as the size and magnitude of the moves they produce.

Here's a pretty picture of an idealized third waves within a larger impulse: Now let's apply the concept to the real-world price action of a particular commodity market, cotton. We start with the November 9 Daily Commodity Junctures, where Jeffrey Kennedy identified a potential third-wave set-up on cotton's price chart and wrote:

"Look for cotton to fall below 67.69. This move down should represent wave C of (2) and set the stage for a sizable third wave rally to well beyond the 69.46 peak." 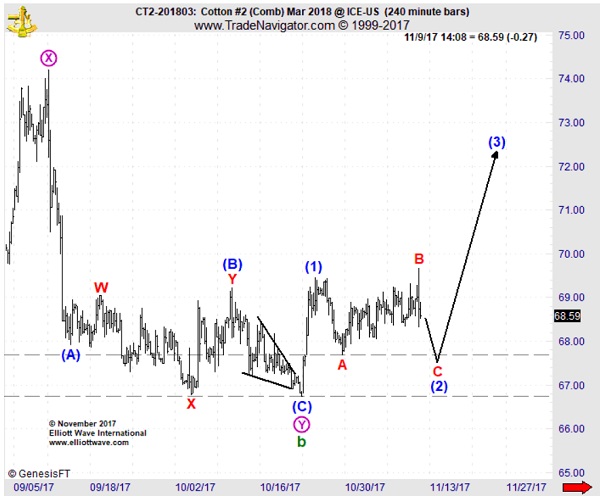 The next chart shows what happened: From there, cotton prices became the very picture of third wave strength, rallying hard and fast in the direction of Jeffrey's up arrow: 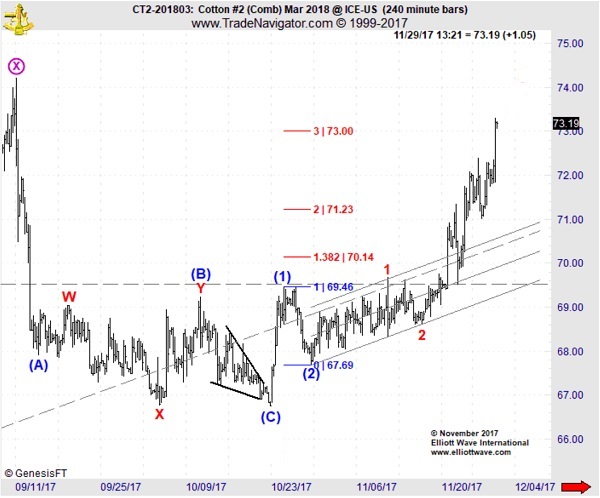 So, what do you see in the price action of the commodities you follow? If the answer isn't a potential high-confidence trade set-up, then you may consider using the Elliott wave lens.

Editor's note: Be sure to catch a new ElliottWaveTV interview with Jeffrey Kennedy on Friday, December 1. Watch now.