Lean Hogs: "It's amazing what a month can do."

In late March, all fundamental signs pointed in one clear direction: down. And yet…

In the world of commodities, "opportunity is knocking" non-stop. The trouble is, sometimes investors aren't always present to answer the door.

Take, for instance, the recent performance in lean hogs. The rap, rap, rap of opportunity was first heard in late March, at the "You Are Here" point on the chart below. Then, prices were sputtering at a multi-month low, and the road ahead set out in three possible directions: up, down, or sideways. 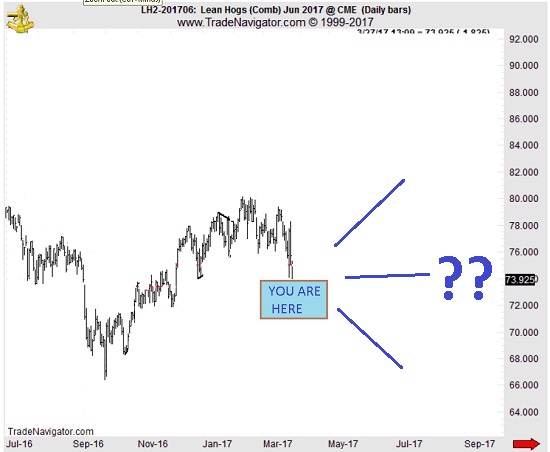 For many hog traders, the answer to future price action was in the market's fundamental backdrop. There, the message pointed in one clear direction: D-O-W-N.

"Hogs tumble, pulled down by investment fund selling... It's hard to argue with technicals when the funds start selling. These guys think cash hog prices are going to take a beating." (Cattle Network)

"Many More Pigs in the Pipeline... The theme is obvious -- hog numbers are still growing. As a trader, it's hard for me to expect a big increase in pork prices at any time in the future until the numbers cut back, but I don't see that happening." (Pork Magazine) 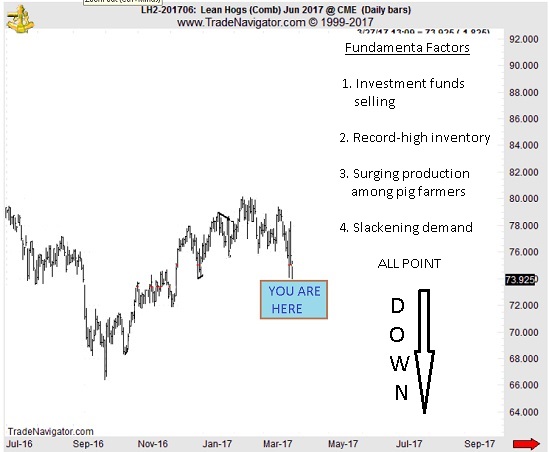 Well, from a late March low, hog prices embarked on a powerful UP-surge to fresh highs. And, for many, this major bullish opportunity was left standing at the doorstep unanswered.

Now, let's hit the reset button and go back to the initial "knock." See, at the very onset of the rally in hogs, our March 27 Daily Commodity Junctures published a bullish outlook. In it, our chief commodities analyst and Commodity Junctures Service editor Jeffrey Kennedy identified a mature A-B-C Elliott wave correction on hogs' daily price chart.

In Elliott wave rules, once a correction is complete, prices must resume the larger five-wave trend in the opposite direction. Meaning, because the slump in hog prices leading up to the March low was a correction, hogs were on the verge of a strong rally, as Jeffrey explained: (Editor's note: the larger Elliott wave count is removed for this publication)

"Wave patterns in lean hogs call for further decline to near 71.72, the .618 retracement of the October 2016 advance. Ideally, once cited support is achieved later this week, a low will form that introduces a wave up to well beyond the 80.35 peak." 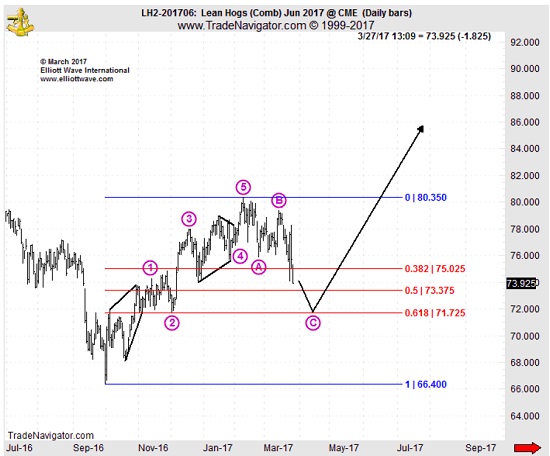 The next chart captures the sheer magnitude of the market's April-May rally to new highs. 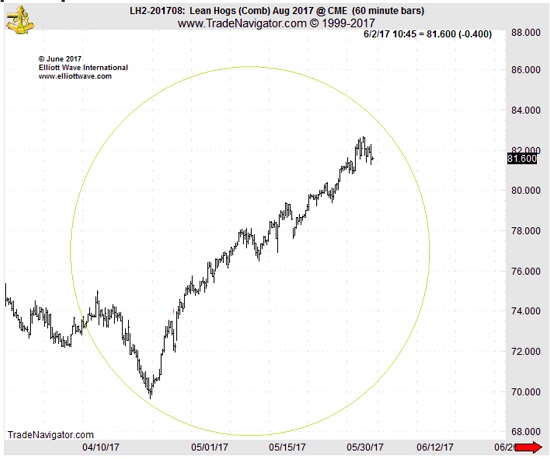 Wrote one May 24 news site:

We think it's more amazing what Elliott wave analysis can do for investors and traders who want to stay in front of major trend changes in the market's they follow.