Lumber's Bubble Pops: When Did the Hissing Sound Really Begin?

Lumber prices plunge 71% since May, begging the question: What the heck happened to “high prices here to stay”?

There's an iconic scene in the 1961 comedy Breakfast at Tiffany's where Audrey Hepburn yells out "Timber!" just before a drunk partygoer faceplants onto the dancefloor.

It's an apt image for the global lumber market, which has come crashing face down since setting an intoxicating record high on May 7. In June, lumber suffered its worst monthly drop on record dating back to 1978.

Add in July's selloff and the commodity has erased 71% in value to disappear its entire 2021 gains (July 20 Fortune):

"The sheer expanse [of lumber's decline] has taken many people out of the market."

Was there an advance warning that the market's upside was about as sturdy as a beaver-eaten tree trunk?

At the peak, this viewpoint wouldn't have been easy to come by. In May, lumber prices were orbiting the moon after soaring nearly 600% during the pandemic. And, according to the mainstream experts, a combination of pent-up demand by a scorching housing market and a global bottleneck in sawmill production meant lumber's uptrend was the new normal. Here, these news items from the time build the bullish picture:

"Our belief is that this cycle that we're currently in is here for the foreseeable future. The hot lumber market [will] persist at least for a few more months."

"The Lumber Shortage Has No End in Sight"

"Additional supply cannot and will not be added fast enough to allow for sustained price deceleration in the coming year."

"We are now in month No. 10 of what we believe to be an 18- to 24-month cycle. Price decline will not happen until there is a slowing of demand."

The bullish consensus was loud and clear. But it wasn't the only voice in town.

In our May 7 Daily Commodity Junctures, editor Jeffrey Kennedy presented this long-term Elliott wave labeled chart of lumber. In this interpretation, the minimum expectations of an impulsive rise had been reached; however, Jeffrey saw prices continuing higher for a few more months before embarking on a sharp reversal that would chop prices down to their stump. 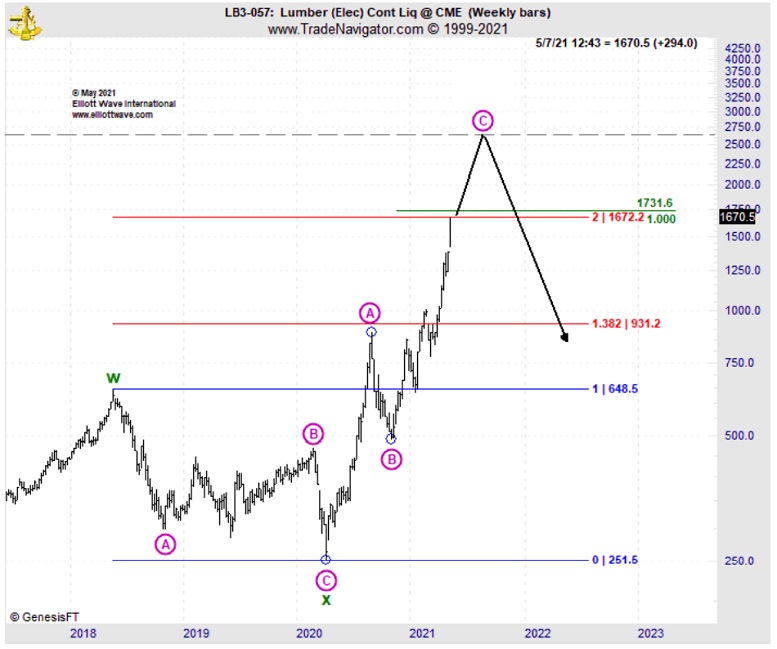 That same day, lumber prices peaked and began swaying in the wind.

Then, on May 28, our Elliott Wave Financial Forecast published a special segment on the lumber market. There, we showed the following chart of lumber prices, along with this red bearish alert:

"The final run-up looks suspiciously like a buying panic. Notice that prices peaked the exact day they met the top line of the trendchannel formed by the rally from 2020. It was May 10, the same day of the Dow's intraday high.

"The day of lumber's closing high on May 7, the 5-day DSI indicator (trade-futures.com) was 96%, a record high over the past 34 years of data.

"As the emerging trend reversal broadens, the economic storm clouds should make a hasty appearance." 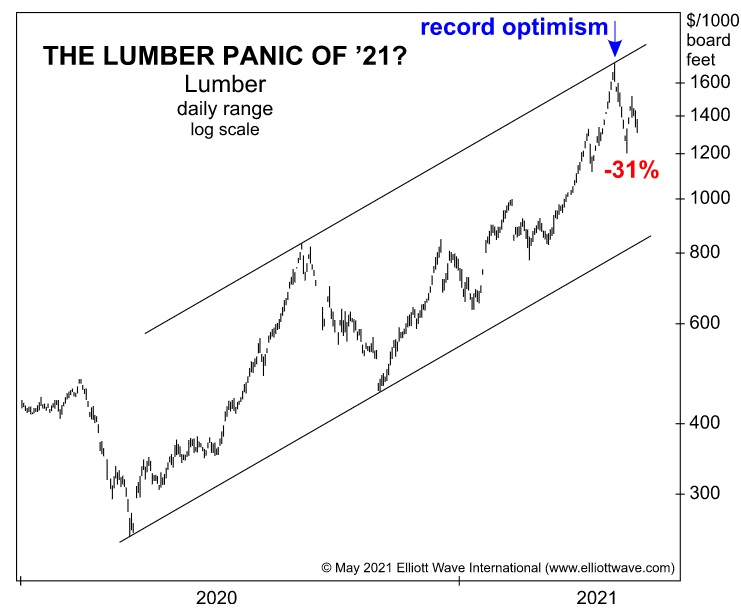 Last but certainly not least, in the line of our analysis was the June 11 Daily Commodity Junctures. There, Jeffrey Kennedy revisited his original wave count for lumber futures and said the May 7 peak marked a significant top. This chart from the June 11 DCJ shows the new path of least resistance; namely, down. 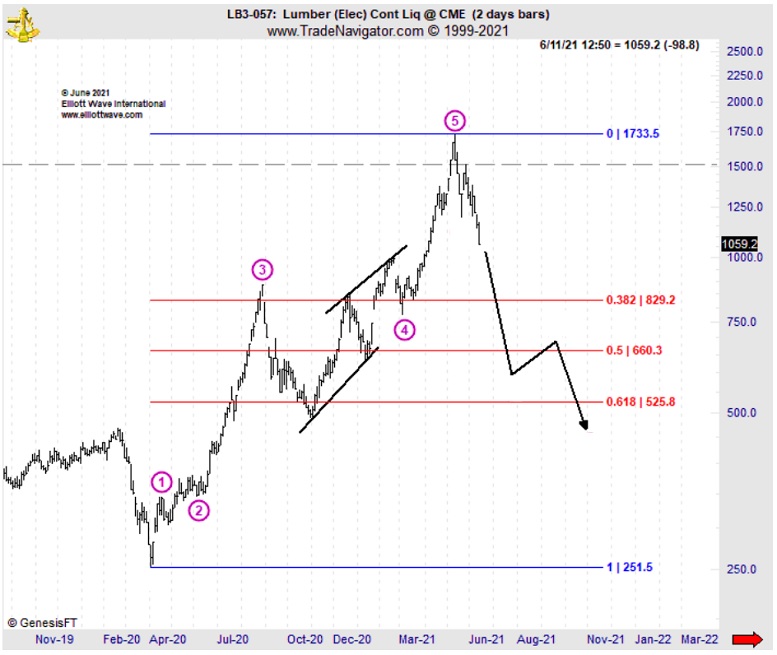 And the chart below captures the extent of the crash that followed: 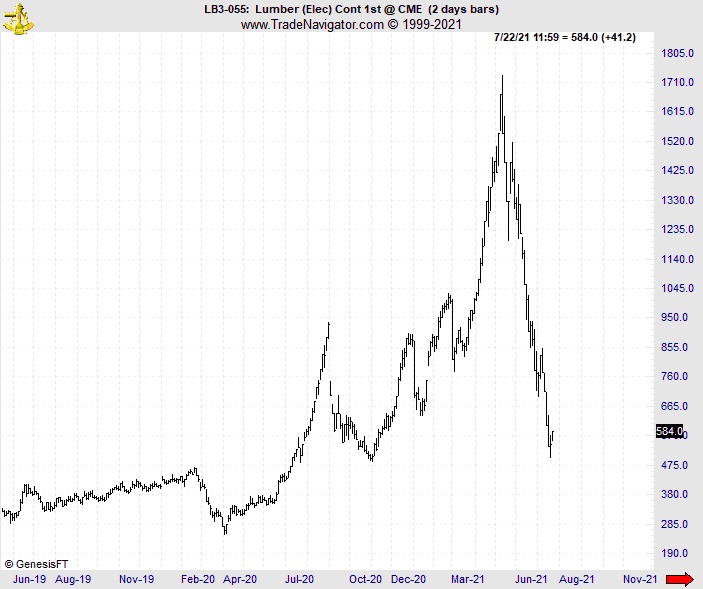 As said, the sheer expanse of lumber's decline has taken many investors out of the market.

But as our story shows, those investors left the market just as a monumental trading opportunity was arriving -- this time, to the downside.

Wave analysis is not magic. It simply tracks the waves of the market participants' collective psychology. And, as you just saw,

The Commodity Boom Has Burst -- And the Opportunities Keep Coming!

It's only a crash if you didn't see it coming. So, what's it going to be?

Our Commodity Junctures Service presents labeled charts, analysis and video lessons that equip investors with the Elliott wave skills to confidently identify set-ups in the markets they follow.

Our propriety Financial Forecast Service offers in-depth analysis and original charts of the likely sea changes underway in the leading U.S. stock markets and pillars of the economy.

See below for more! 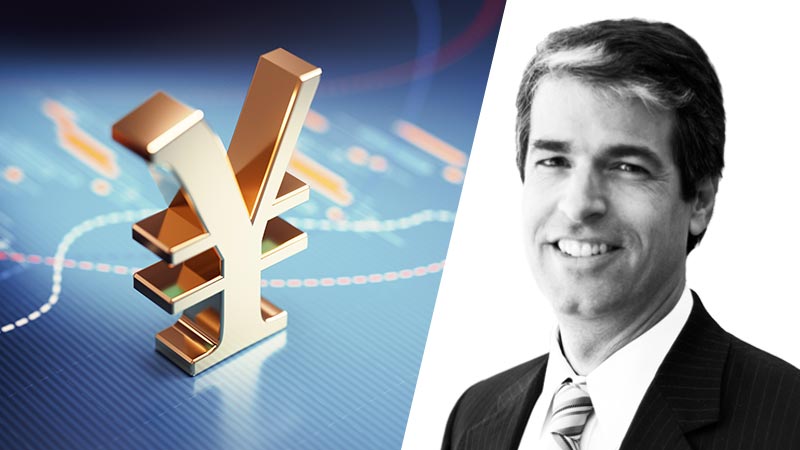 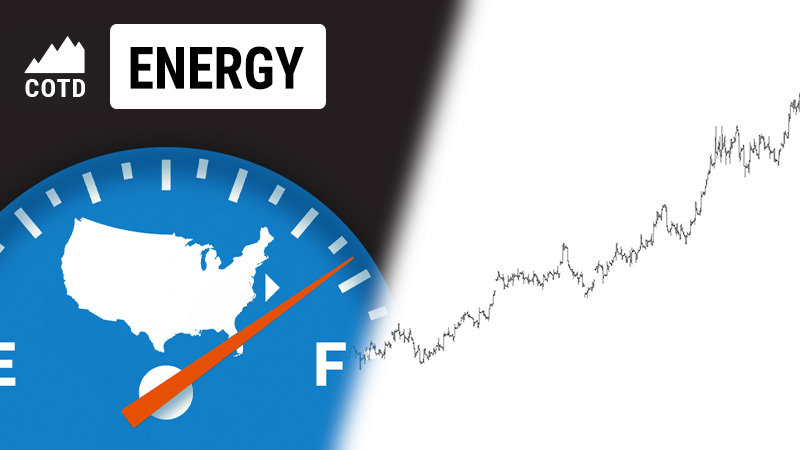