The early November sell-off in live cattle was NOT part of the fundamental script; it was, however, part of the Elliott wave one

I recently watched the 1991 western City Slickers, during which an odd thought struck me, namely: Per mainstream financial wisdom, fundamental data is to market trends what a cattle driver is to a wayward herd. It leads price to its destination -- be it up, down, or across field. Think: The aged cowboy Curly from City Slickers gracefully steering his compliant cattle.

But in real life, often we see a slew of news events unfold in a market's fundamental backdrop that should have led prices one way -- only for them to break free and go charging in the opposite direction. Think: the "city slicker" Mitch (Billy Crystal) losing total control over his stampeding herd.

This very thing happened recently, in fact, in the price action of (you guessed it) live cattle.

In late October/early November, live cattle prices were on a tear, smashing through their daily up limit five sessions in a row en route to fresh highs.

And, thanks to a barrage of supportive data, all fundamental signs pointed UP for cattle, such as:

All total, live cattle was branded with a big, bold "B" for "Bullish," as this October 31 news source makes plain:

"We've resumed the mindset that futures want to buy into the live cattle market... Funds looked at this thing and decided this was an opportunity to jump into the pool." (Reuters)

But instead of rallying, live cattle prices followed along to the City Slickers' theme song, "tumbling tumbleweeds" to multi-month lows.

So, what went wrong?

Our answer: nothing. See, in our experience, even in commodities, news events are not always the main driver of market trends. Investor psychology, which unfolds as Elliott wave patterns visible on price charts, is.

Let's go back to live cattle and analyze recent price history through an Elliott wave lens to see the difference. Our destination: the October 20 Monthly Commodity Junctures. There, our chief commodities analyst Jeffrey Kennedy outlined a near-term trajectory for cattle prices that included a move up "above 124," followed by a sharp decline down to "about 115."

"As you can see, my focus is to the upside, certainly for say the next five to ten trading days. In fact, I'd like to see prices push back up above the 124 area. Once we get there, I think the market will be vulnerable to a decline, most likely back down to about 115."

"On a short-term front, we're working an impulsive advance. I'm identifying this advance as wave ((A)), and once wave ((A)) is complete, and we have all the substructure necessary to complete a five-wave move, we'll look for a decline." 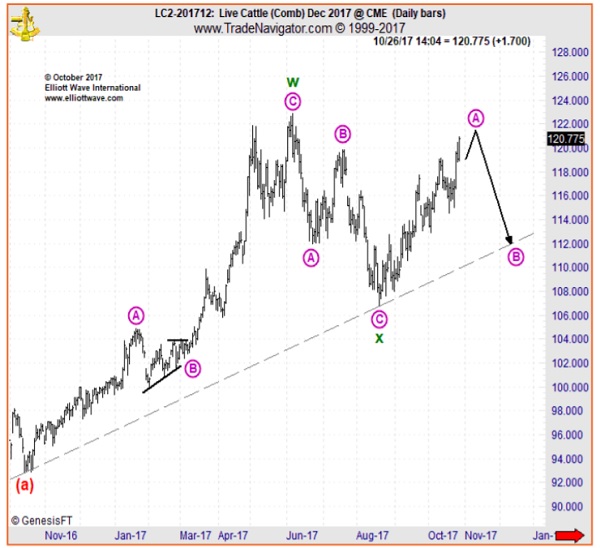 The next chart shows you what followed: Cattle prices did rally above 124 (as high as 131, in fact), only to give way to the precipitous sell-off we see today: 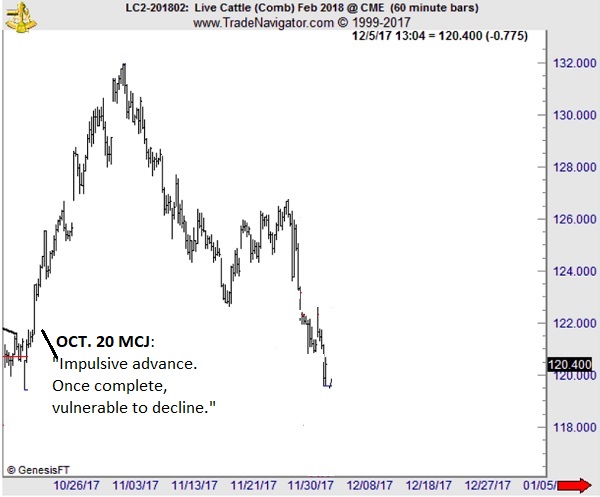 Do all Elliott-wave based forecasts unfold on cue? Absolutely not. But they do provide what few other forms of analysis can -- namely, an objective guide for lassoing near- and long-term opportunities with less risk.

From ICE to CBOT, New York to London, Jeffrey Kennedy leaves no market behind in the search for actionable forecasts -- at just the Right Time.

The result: EWI's Commodity Junctures! This multi-dimensional service includes live video analysis, original price charts, educational lessons, and more, all with one goal in mind -- steering YOU toward high-confidence trade set-ups in the world's most liquid commodity markets.