This is Why Cocoa's Crash Was a Perfect Setup

Perfect from an Elliott wave perspective, that is

The other day, I went paddle-boarding for the first time and was struck by a familiar feeling; one that comes from, of all things, speculating in the markets.

See, when your board is in line with the current and the wind is at your back, the board moves effortlessly, gliding along the top of the water with no strain at all. This is the equivalent of trading with a market's trend.

On the other hand, when your board goes against the current and the wind comes at you from the front, any attempt to move forward feels like wading through wet cement. This is what it's like to enter a market during a countertrend move.

It goes without saying, we're all aiming for the first scenario. The question is, how do you know which move prices are about to make?

In 2013, our chief commodity analyst Jeffrey Kennedy co-authored an invaluable resource titled "Visual Guide to Elliott Wave Trading" in which he explained how combining Elliott analysis with technical methods enables traders to identify price action moving with, and against the larger trend. In the book, Jeffrey writes:

"The four best waves to trade are therefore: Wave 3, 5, A, and C because they are oriented in the direction of the one larger trend."

Now, let's take Jeffrey's lesson and apply it to the real-world price action of a popular commodity market, cocoa. Back in September of 2016, cocoa prices were sailing toward their highest level in five years. And yet, that's precisely when Jeffrey began to prep the market's downside.

"As we move into 2017, if everything goes according to plan and cocoa continues to adhere to its Elliott wave scripts, I really think this area here, roughly centered around 1634 through 1597 is an ideal area for this wave C to actually fall to.

"Essentially, it's a very bearish forecast. The potential for a sizable sell-off is indeed very real and we know what to look for to signal that the decline has begun." 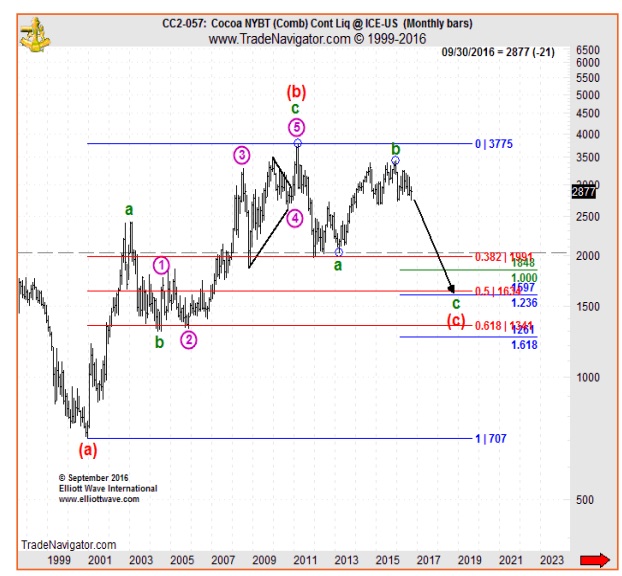 As for what happened next, the following chart answers: Cocoa prices turned down in September 2016, crashing onto the shores of a 10-year low in April 2017. 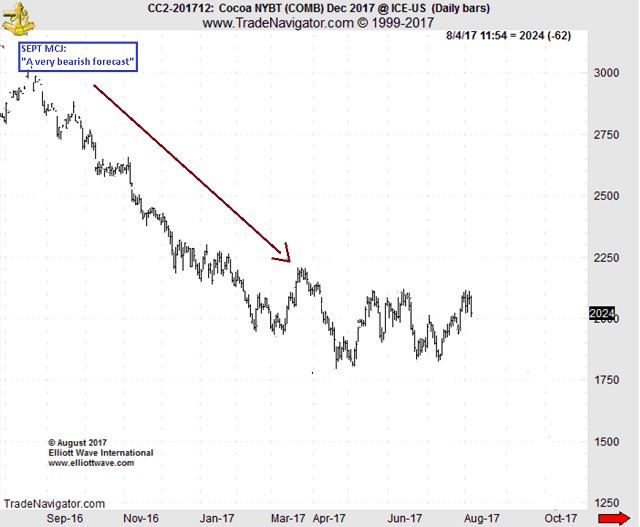 Since then, cocoa prices have been treading water in a sideways crawl. In the August 4 Daily Commodity Junctures' Weekly Wrap-up, Jeffrey explained what prices must do to re-ignite the downside, in a "final thrust" to his long-standing target.

Suffice it to say, cocoa's ship is still at sea, as the winds of the trend carry it to its next destination.