Bitcoin’s 13% Plunge: The REAL Path to its “Bloodbath”

It's like something out of a daytime soap opera. The world's favorite "It" crypto coin was shot down last week as it hemorrhaged a massive 13% sell-off in a mere 24 hours.

According to the mainstream "police," the armed gunman was none other than Wall Street giant Goldman Sachs. Or, more accurately, a September 5 Business Insider report that Sachs was ditching its plans to open a crypto-trading desk due to "factors beyond [its] control."

"Bitcoin Bloodbath: News from Goldman Sachs is Behind Today's Plunging Prices. As is sometimes, but not always the case -- the reason is pretty clear... The latest crash began Wednesday after the Goldman news broke, but it accelerated into Thursday."

Or, not. It's a fitting explanation -- but like other similar explanations based on market fundamentals, this one is one step behind the market. For traders and investors, it's much more important to identify price turns in advance. On that, Elliott wave analysis often is a better alternative.

On September 4 -- one day before the Sach's report broke -- our Cryptocurrency Pro Service identified a bearish Elliott wave setup on Bitcoin's price chart:

"While there is no evidence a top has been established, the pace of the rally has slowed to a crawl and that might signal it is mature. The proximity to the [Fibonacci] 61.8% retracement target sends a similar message. Weakness beneath 7229.94 would hint a reversal has occurred." 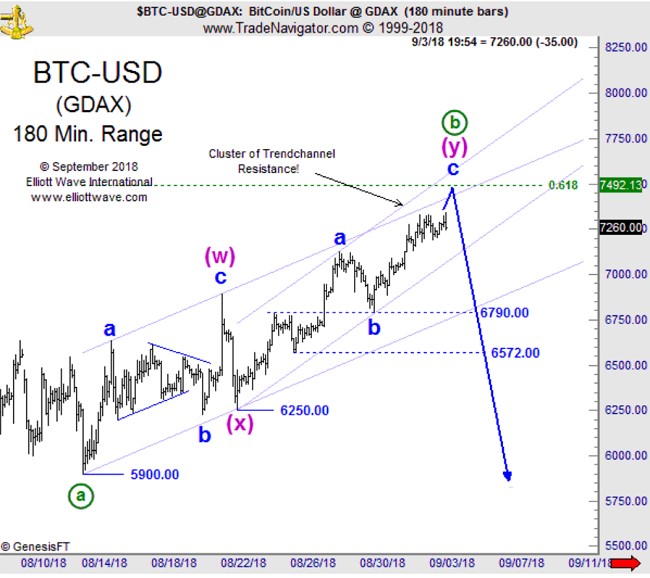 The next chart moves forward in time to illustrate the "bloodbath" that followed: 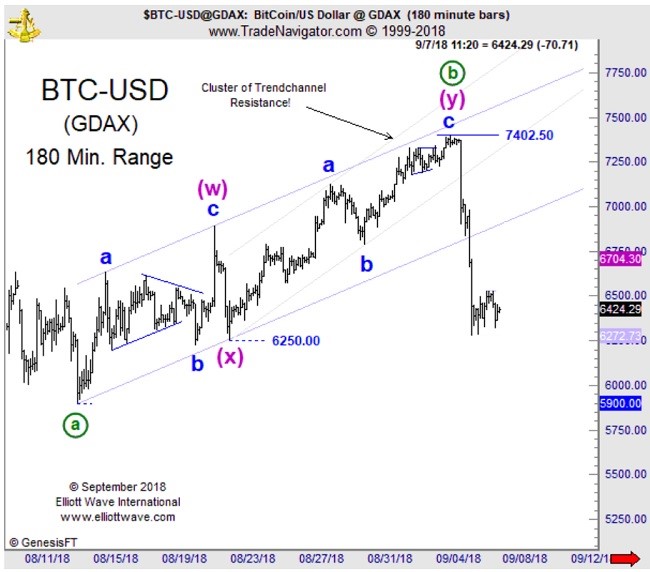 As you've just read in the analysis excerpt above, this forecast was more than just a lucky guess. The market often reverses when it hits Fibonacci price targets, plus the Elliott wave picture was showing a mature rally as early as September 4.

All market forecasting is about weighing probabilities; there are no guarantees. Yet, Elliott wave analysis will always help you see in which direction the weight of the evidence tips the scale.

Subscribers know: Since we launched our Crypto Pro Service back in 2017, we've steadily added to the number of cryptos we forecast intraday and daily.

Bitcoin and the gang have offered speculators lots of dramatic opportunities lately.

Our subscribers have kept ahead of many -- when most traders were blindsided:

Most traders get run over by these big crypto swings.

With Elliott waves you can be calm, prepared -- and ready to act.

1
You Get Analysis Through the Day

Your Crypto Pro Service subscription puts a team of Forex experts in your corner. Their goal is to make sure that day-by-day, you have the latest Elliott wave coverage for 7 of the world's most popular digital coins: Bitcoin, Ethereum, Litecoin, Bitcoin Cash, XRP, EOS and Monero. We provide you with crypto forecasts several times a day so you can get in front of intraday moves -- as well as longer-term opportunities.

As a Crypto Pro Service subscriber, you get opportunity alerts in other notable cryptos. Your Pro Services team scours all crypto markets for dramatic setups for you. That's when a market has reached a low-risk, high-reward juncture in its wave pattern. You'll find the alerts in the Opportunities section of your Pro Services portal.

3
You Get Essential Weekly Perspective On Currencies

Once a week, your crypto guides prepare a video to help you prepare for the week ahead. Sit back and watch as our analysts reveal the crypto markets that are on their radar and should be on yours. These videos are required viewing for all serious crypto followers.

If you have a question about the Wave Principle or our analysis, just send us an email. A crypto team member will get back to you. We know that we're successful when you are successful. We do what we can to make sure that happens.

Get Both Intraday and Daily Coverage