Move Over Bitcoin, There's a New Crypto Sheriff in Town

Experts say Ethereum has the most upside potential of all cryptos. But when did that upside begin?

Imagine that scene in the Ole Western movie: The John Wayne cowboy rolls into town on his trusty horse, six-shooter pistol in holster, 10-gallon hat on head, and gleaming gold sheriff badge pinned to his vest, causing everyone but the tumbleweeds to stop dead in their tracks.

Well, this chart of Ethereum paints a similar, heart-stopping picture of the world's second largest cryptocurrency by market cap: Between a bottom in March 2020 and an all-time peak in May 2021, Ethereum rocketed over 2200%! 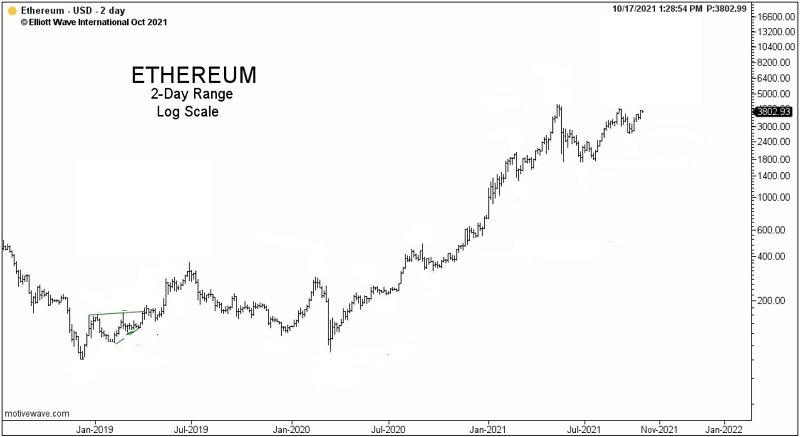 At the coin's apex, a May 6 Fortune confirmed Ether's status as the new crypto sheriff in town:

A brutal summer sell-off followed, but Ethereum has been clawing back to its all-time highs since late July. And, according to many mainstream sources, the eco-friendly coin with its 27-year-old billionaire Gen Z founder is now the "Top Crypto Investment of 2021." (August 18 Motley Fool)

A September 7 crypto report posited Ethereum is "assumed to be on the foot of the mountain with the peak at $50,000."

While an October 13 CNBC cited one celebrity investor's delirium for ethereum:

"I wish I had bought [ether] sooner... That's partly because I think it's the closest we have to a true currency.

"Ethereum is a major step forward from cryptocurrencies such as Bitcoin, which only allow users to send money to one another. But more importantly, innovations are coming for Ethereum.

"As an investment, I think ethereum has the most upside."

And it might -- more on that below (see the last chart -- it tells you all you need to know, if you know Elliott waves.) But to paraphrase John Wayne, it doesn't take much courage to saddle up to a prize-winning horse. In other words, these experts are hitching their wagon to Ether AFTER its proven itself a worthy contender by beating out every one of its crypto peers for the past year.

But while the mainstream experts are setting their Ether sights on $50K per coin TODAY -- it was only one year ago those same experts couldn't imagine the same coin making it above $560!

Foreseeing this scenario for Ethereum was also not a dream. On November 15, 2020, our Crypto Pro Service showed the following EXTREMEMLY BULLISH chart of Ethereum. It showed prices at the start of a third-of-a-third-of-a-third wave rally -- the most powerful Elliott wave impulse pattern at three degrees of trend!

The implication was huge: Ethereum's long-term trajectory would see prices achieve the $3000 area by the middle of 2021:

"ETH continues to advance against its 370.83 low as forecast. A break of 488.12 is the next upside objective for the bulls." 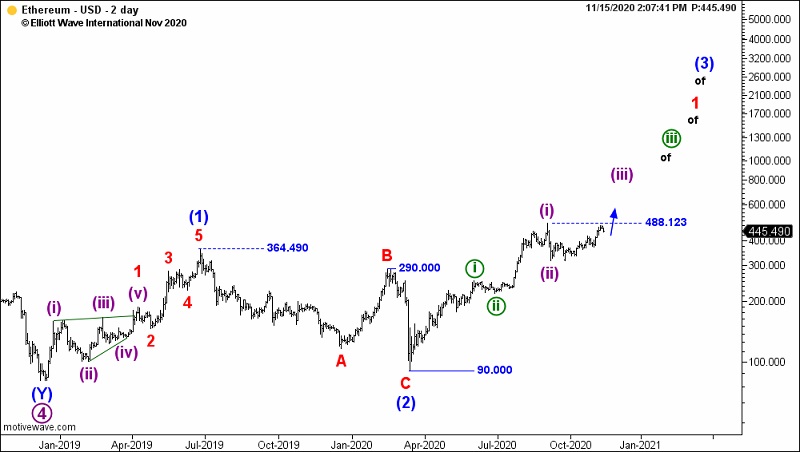 From there, ETH took to the upside with gusto. In an April 25, 2021, Crypto Pro Service update we showed this chart, "favoring the wave ((v)) advance is still underway" with further upside potential toward $4000. 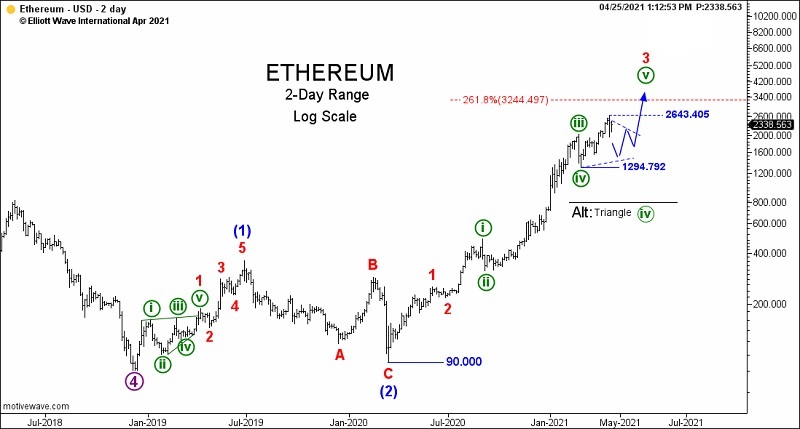 ETH continued higher, peaking at $4370 on May 11 before beginning a rapid descent into multi-month lows.

Near that recent bottom, on July 20, 2021, our Crypto Pro Service showed this chart and said, "Any case for a possible bottom would need to be made by an impulsive recovery 1991." 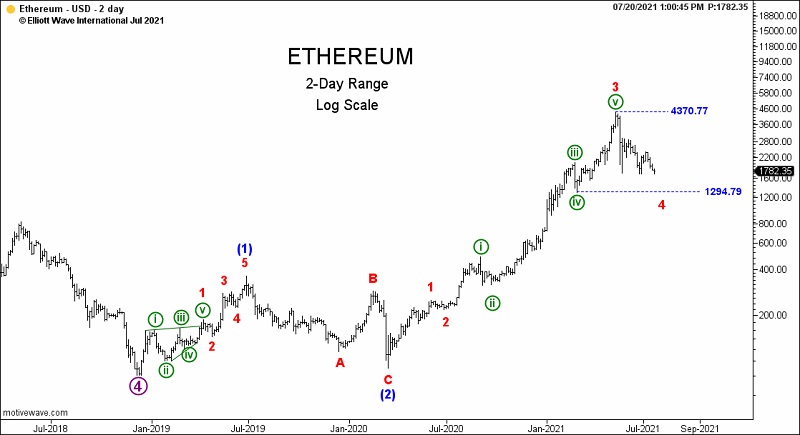 From there, ETH began an impulsive recovery above 1991 to confirm the resumption of the uptrend. 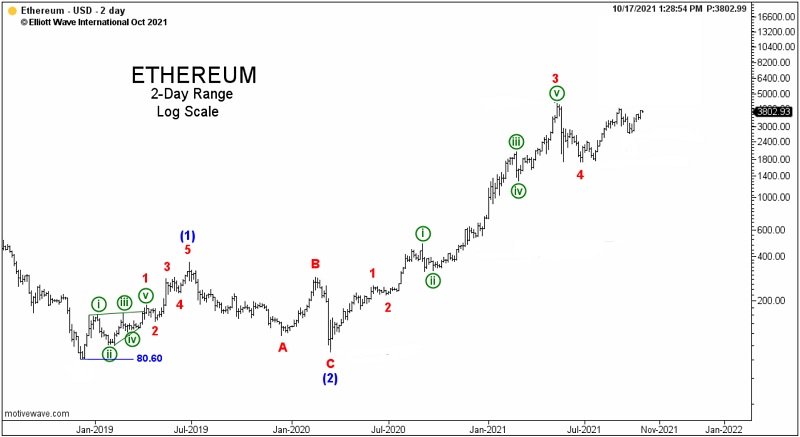 So, the question remains: Will Ethereum continue to ride off into the bullish sunset?

That last chart above -- it tells you all you need to know, if you know Elliott waves. And if you need a little help, right now, our Crypto Pro Service presents original analysis and labeled price charts of Ethereum -- along with the world's other leading digital coins.

Each chart shows you Elliott wave labels, critical price levels, and directional arrows showing where prices may be in the hours, days, weeks and months ahead. Subscribe, and we'll make it easy for you.

It's High Noon in Cryptocurrencies!

So -- Ethereum is the new sheriff in crypto town!

But make no mistake... there will be another "silver bullet" event cited after-the-fact that supposedly causes ethereum and its cryptocurrency peers to soar or plunge.

But if you want to arrive at those moves in advance, our Crypto Pro Service presents top-shelf analysis, video updates, and labeled price charts that give traders all the critical details to identify high-confident set-ups and manage risk along the way.

Here's how to get instant access to the latest forecasts now...