This chart of the US Dollar/Australian Dollar captures the Aussie note's strong rally to new 2020 highs, which launched in earnest in early April. 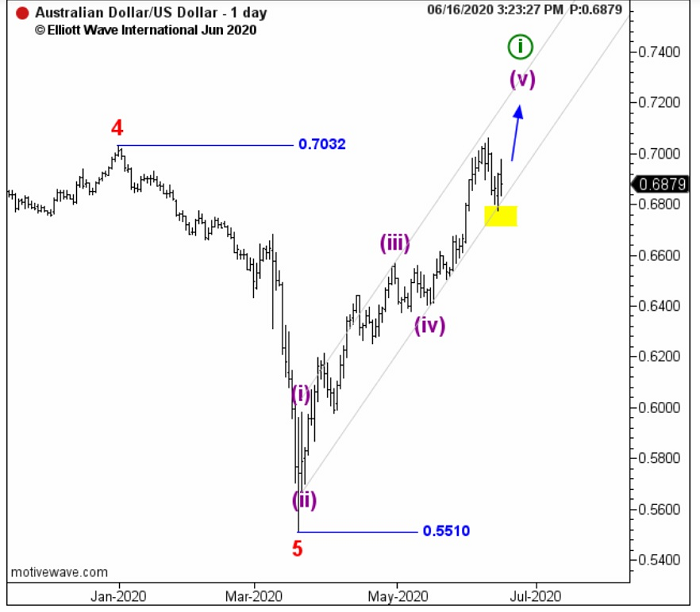 Mainstream analysts have scratched their heads at the Aussie dollar's rally, as it defies the idea that currencies track the economy. With the global economy mired in one of its worst recessions ever, the export-dependent Australian dollar should be down vs. its US counterpart.

And, this June 17 Financial Times takes a stab as to why:

"The avalanche of cheap money from the US Federal Reserve has created a bizarre condition in which exchange rates track stocks rather than economic fundamentals... The situation is antithetical to the way FX markets are supposed to work."

In turn, perception of the Aussie dollar flipped from a risk-off currency to a risk-on asset, benefiting from the quote "radical actions of central banks to fend off the worst effects of the pandemic."

Yet, this article also reminds us that those same "radical actions" have been in place for quite some time. We recall the period between 2011 and 2016.

"Interest rates slashed to near zero"? Check. The Fed rate didn't budge from its 0-.25% range

And -- "massive fiscal stimulus"? Check. By September 2016, the world's largest central banks had injected $9 TRILLION into the global economy.

And yet, here's what we see on a longer-term chart: Despite the "avalanche" of cheap money pumped out starting in 2011, the Aussie dollar actually saw a multi-year long meltdown, to its lowest level versus the US dollar in many years 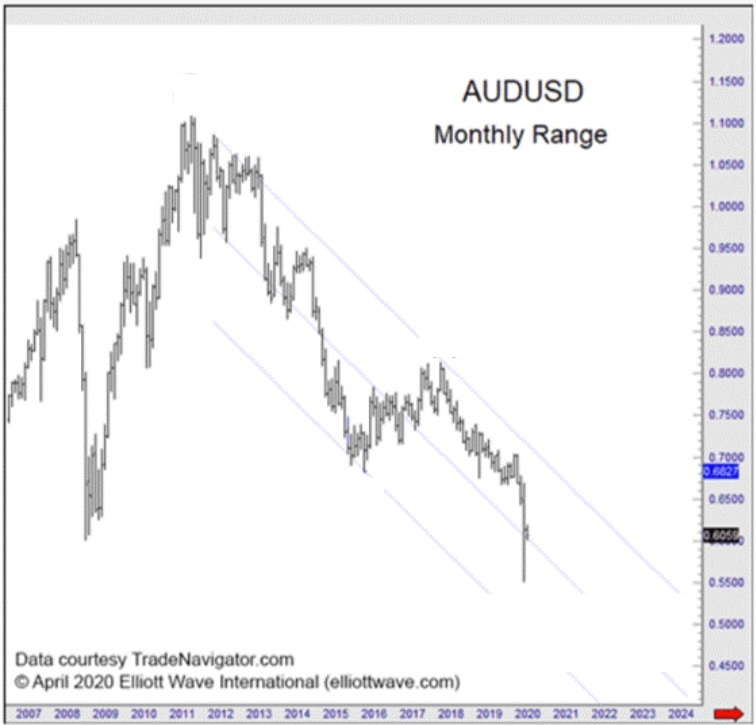 At that low, mainstream analysts saw no end to the Aussie dollar's rout. Their bearishness was based on -- wait for it -- the "radical" actions by the Fed. Said the March 18 Business Insider:

QUOTE "AUD/USD dipped below 0.60000 overnight following additional [Federal Open Market Committee] support and the prospect of US fiscal stimulus... it may have some way south still to go."

However... Elliott wave practitioners don't give two hoots about fundamental "reasons," and focus solely on price patterns and sentiment.

Case in point, the April 3 Global Market Perspective, which showed subscribers a version of this chart, which made clear that prices had unfolded in 1 2 3 4 5 waves down from its 2011 high. Therefore, after a "years-long impulsive decline," a very significant low was at hand. 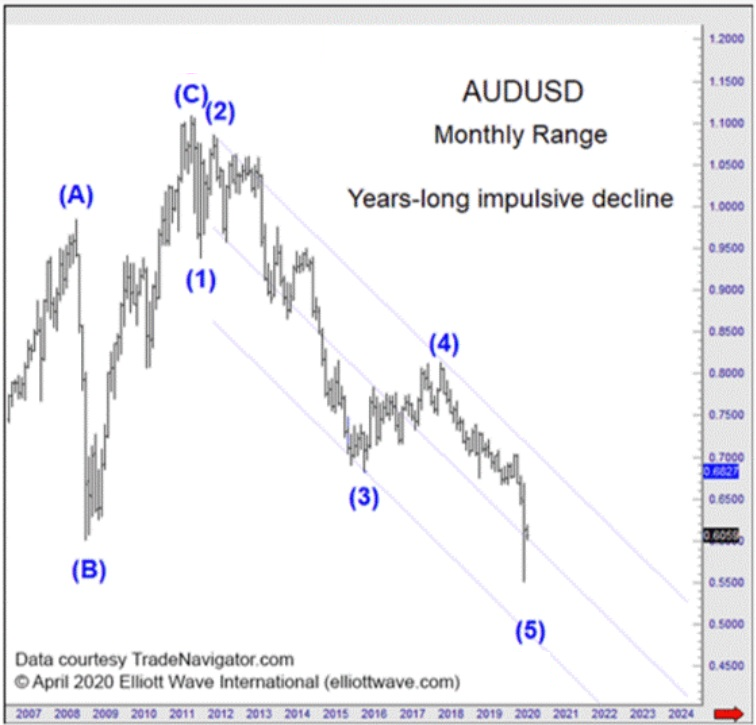 So it proved, as we see when we go back to the near-term perspective: the Aussie Dollar rallied some 14% from early April to new 2020 highs.

For Forex traders, Global Market Perspective provides the most comprehensive analysis of the long-term trend changes in the world's leading currency pairs. See below for more!

...A price move at the end of a "years-long impulsive decline," and what you get is a high confidence forecast.

You just watched the outcome of that forecast in AUSUSD. We deliver forecasts like this in each monthly issue of Global Market Perspective: 40-plus world markets, including major world stock indexes, interest rates, energy, currencies, metals, cryptocurrencies and more.