I'm Nico Isaac, and this is Chart of the Day

This chart of the U.S. dollar/Russian ruble rate captures one of the most dramatic forex pairs of 2020. From early January to late March, the dollar gained as the ruble plummeted (Mar 9 Moscow Times) to a four-year extreme. 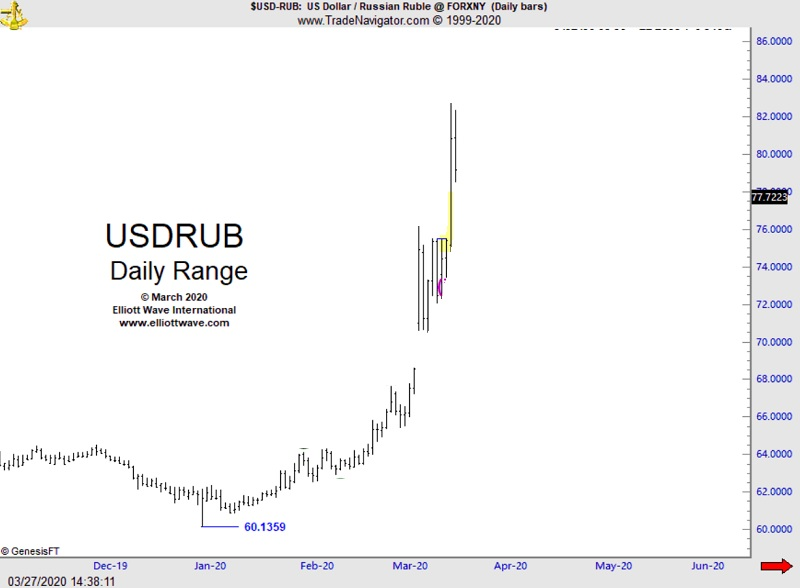 QUOTE: "The ruble has been one of the worst-performing currencies against the dollar this year, losing almost 18% of its value since late 2019 after a double hit from an oil price slump and a global sell-off due to the coronavirus outbreak." END QUOTE

That's a convenient explanation -- after the fact -- for why the ruble crumbled.

But could investors have prepared for the currency's reversal -- before the "double hit" of the oil slump and coronavirus?

That depends on where those investors looked for guidance. In late 2019, the ruble was enjoying a historic comeback. By year's end, it was the second-best performing currency against the dollar, and stood at its highest level against the buck in 17 months.

The mainstream sources were emphatically bullish.

Another called the currency a "Beacon of Light", forecasting Russia to enter 2020 with "one of most lucrative carry-trade currencies" in the world.

Again, the mainstream experts expected the ruble to be a "beacon of light" in early 2020. Instead, it became a source of darkness, as it sold-off against the U.S. dollar in January, February and March.

Thankfully, the Ruble bulls were not the only game in town. On December 25, 2019 -- before the coronavirus first made headlines AND before the oil price slump -- our Currency Pro Service featured a special opportunity in the U.S. dollar/ruble pair.

There, the December 25 update forecast a "massive advance" for the USDRUB (i.e. a massive sell-off in the ruble against the greenback) along with this chart showing the scope of the move. 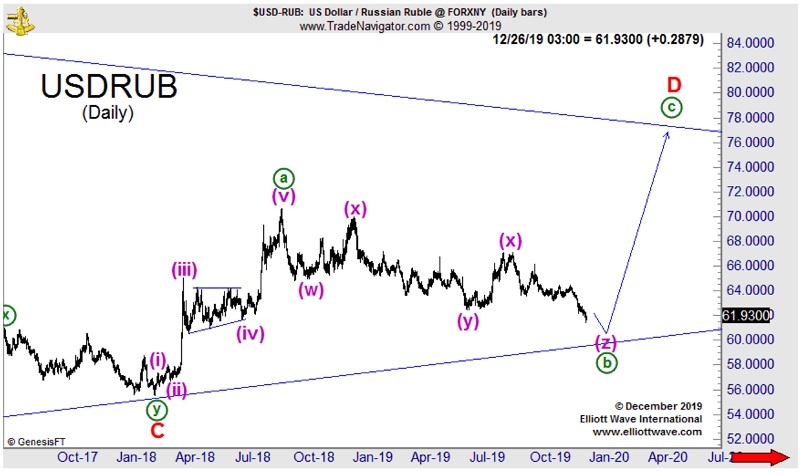 When the 2020 arrived, the ruble's uptrend departed, along with the widespread hopes for its comeback.

The December 25, 2019 Currency Pro Service analysis for the USDRUB was a unique event. But, as every successful trader knows, opportunity can arrive in any financial market.

Stay ahead of the near-and long-term trend changes in store for the world's leading currency markets. with our premier, Currency Pro Service. See below for more.

A: To Wait on After-the-Fact Stories That Link Big Price Moves to "Big News" Reports

Chart of the Day just showed you a case-in-point of how this happens: After the Ruble began to fall against the Dollar, financial news said Coronavirus (etc.) was the cause. Backwards reporting like that happens all the time, for virtually all big financial market moves.

You also saw how our Elliott Wave forecasts alerted subscribers before the explosive move unfolded (and way before the supposed "cause").

We can help you spot both short- and long-term trend changes -- in currencies and currency pairs across the world.

See below for more on Currency Pro Service.