Why the price action of the U.S. Dollar Index conformed to what was expected

Classic technical price patterns become "classic" because they are often recognizable in financial markets over time.

A rising ending diagonal is usually followed by a sharp decline retracing at least back to the level where it began and typically much further.

With that in mind, let's review EWI's analysis of the U.S. Dollar Index, starting with this chart and commentary from our Sept. 27 U.S. Short Term Update: 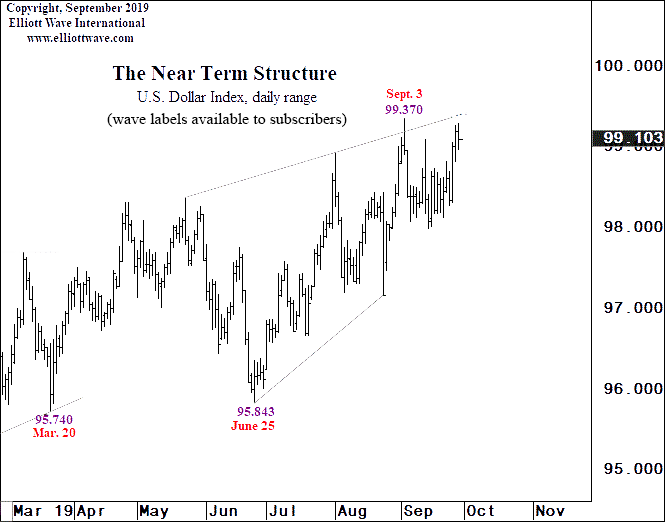 Well, the U.S. Dollar Index did climb only slightly higher and the next significant move has indeed been a decline. 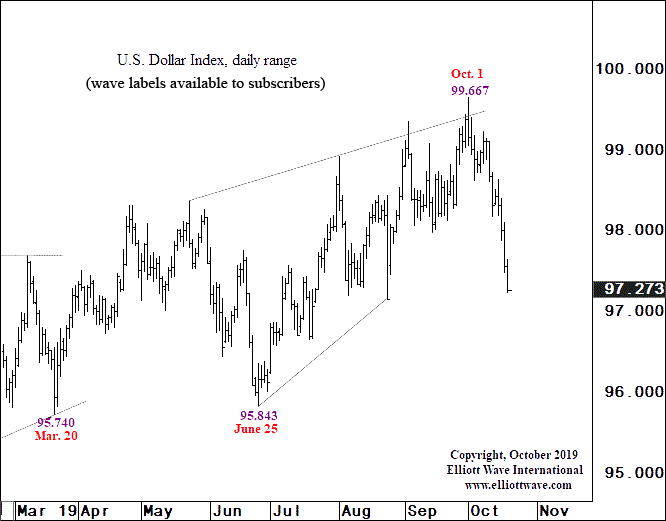 The current behavior in the U.S. Dollar Index is exactly the type that should develop after the completion of an ending diagonal pattern: a swift retracement of the entire pattern. Prices are progressing lower in an impulse wave from the 99.667 high on October 1. ... Near term, the index has closed lower 7 out of the past 8 sessions, creating a compressed decline.

By contrast, a currency strategist focused on "fundamentals" instead of technicals as a reason for the greenback's rise and then fall (Bloomberg, Oct. 18):

"One of the things that kept the U.S. dollar supported broadly over the past few months was the idea of uncertainty in Trump's policies," a currency strategist said.

Progress on trade talks this month "took the edge off" the dollar.

But EWI's analysts were informing subscribers of the developing ending diagonal well before the latest "progress on trade talks."

And, right now, our analysts are discussing specific price targets for the U.S. Dollar Index.

See what they have to say, risk-free for 30 days. Get details just below.

In other words, EWI's deep bench of analysts expect a major price move in U.S. stocks -- just around the corner.

You need specific analysis and forecasts to guard the portfolio you've worked so hard to build.

Investors now face big-time risk -- according to our analysts' interpretation of the Elliott wave model.

Learn exactly what our Elliott wave experts are showing and telling subscribers, 100% risk-free.