More marijuana exchange-traded funds may be on the way

Years ago, EWI predicted that marijuana would eventually be legalized. Today, that prediction is a reality in some U.S. states. Find out about a new marijuana-themed ETF.

Of course, "midnight toker" referred to pot smoking. Back then, there were plenty of midnight tokers, but most of them feared getting "busted."

“Eventually, possession and sale of recreational drugs will be decriminalized.”

Then, in July 2009, the Socionomist published a study titled "The Coming Collapse of Modern Prohibition."

Fast forward to 2012: That was the year that Colorado and Washington became the first states where citizens voted to legalize marijuana for recreational use. Even though pot remains illegal at the federal level, since 2012, as you probably know, other states have also legalized pot for recreational or medical use.

The marijuana industry has seen surging growth of late. Sales grew 30% in 2016 … and they are seen tripling in four years. … In 2016, roughly 60% of Americans said they favored the legalization of recreational marijuana. …

In the meantime, here's how the Horizons Medical Marijuana Life Sciences ETF has been trading: 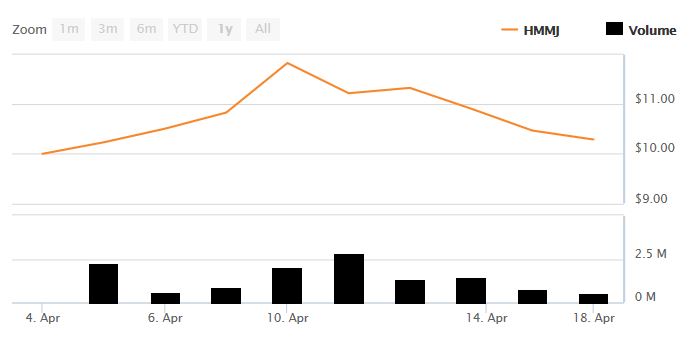 As you can see, the price debuted at 10 Canadian dollars and climbed for a few days thereafter. The price then retreated, but still traded higher than its debut price on April 18.

Of course, no one knows for sure how HMMJ will perform in the future. But the broader point is that the socionomic hypothesis successfully anticipated the decriminalization of marijuana years before it occurred in various U.S. states.

A flier that spread at a Grateful Dead concert turned 4/20 into a phenomenon. ... Thursday marks marijuana culture's high holiday, 4/20, when college students gather — at 4:20 p.m. — in clouds of smoke on campus quads and when pot shops in legal weed states thank their customers ... .

Right now, we're also offering forecasts for other major social and financial trends that we believe every investor should know about it.

In our view, once-in-a-lifetime shifts are just around the corner.

United Parcel Service (NYSE: UPS): "I like this chart!"