Debt Crisis 2.0: How the Pieces are Falling into Place

As the amount of household debt rises, so does the risk of another financial crisis. A new milestone has been reached in the U.S. But a chart shows that the dangers of debt are global.

I don't recall seeing a "breaking news" banner on a cable news channel when this news broke about U.S. household debt about a month ago (The New York Times, May 17, 2017):

A New Milestone in Household Debt

This debt development deserves far more attention. After all, the last time a debt bubble developed, the world was on the brink of what was termed a financial "Armageddon."

But, a bull market has a way of short-circuiting memories, and besides, editors and producers find political intrigue and would-be scandals more enticing than debt statistics.

Of course, after the 2007-2009 financial crisis was in full swing, news coverage was wall-to-wall.

On the other hand, Elliott Wave International makes every effort to keep subscribers ahead of such developments, so there's time to prepare.

For example, two years before the start of the 2007-2009 financial crisis, our January 2005 Elliott Wave Financial Forecast said:

Margin debt is just the tip of a pyramid that extends way beyond the markets. Its contraction will help burst the economy-wide debt bubble.

And, as we now know, that's what eventually happened.

As we also know, that debt implosion was global.

The build-up of debt is also global this time around. Review this chart and commentary from the June 2017 European Financial Forecast: 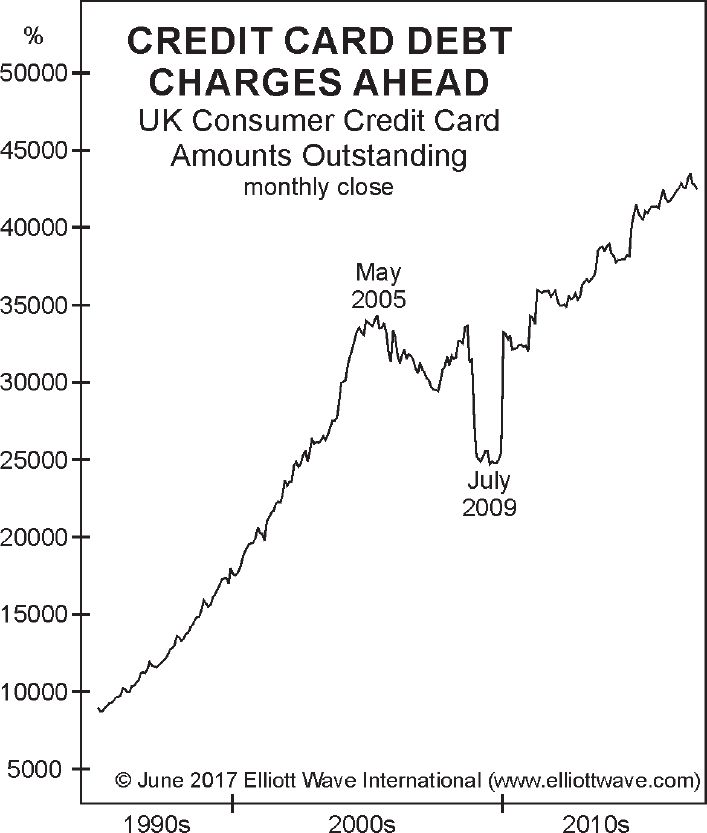 Since the mid-1990s, the only significant pullback in the uptrend [of outstanding credit card balances in the UK] occurred from May 2005 to July 2009, as the real estate downturn generated the biggest financial crisis since the Great Depression. By January 2011, though, outstanding credit card balances had pushed to a new all-time high, and the trend has been up ever since.

The stage is set for another, perhaps bigger, debt implosion.

Anyone can report the news after it happens.

The analysis in the just-published June Elliott Wave Theorist anticipates the news. Don't miss it.