"Rising Oil Prices Are Bearish for Stocks": True or False?

False, as you may have suspected -- see the evidence in one chart

You may remember that during the 2008-2009 financial crisis, many called into question traditional economic models. Why did the traditional financial models fail?

That's a crucial question to your financial well-being. The "10 Popular Investment Myths Shattered" series gives you a well-researched answer. Here is Part II.

This is a ubiquitous claim. It would take weeks to collect all the statements that economists have made to the press to the effect that recently rising oil prices are "a concern" or that an unexpected (they're always unexpected) "oil price shock" would force them to change their bullish outlook for the economy.

For many economists, the underlying assumption about causality in such statements stems from the experience of 1973-1974, when stock prices went down as oil prices went up. That particular juxtaposition appeared to fit a sensible story of causation regarding oil prices and stock prices, to wit:

Figure 7 shows, however, that for the past 15 years there has been no consistent relationship between the trends of oil prices and stock prices. 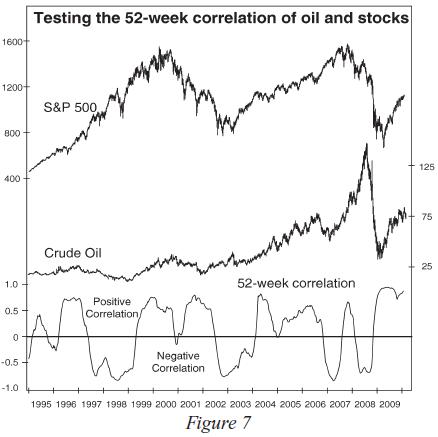 Sometimes it is positive, and sometimes it is negative. In fact, during this period it has been positive for more time than it has been negative! And the quarters during this period when the economy contracted the most occurred during and after the oil price collapse of 2008. Thereafter oil prices doubled as the economy was reviving in 2009. None of this activity fits the accepted exogenous-cause argument.

But wait. Could rising oil prices perhaps be bullish for stocks?

Yes, once again we can argue both sides of the exogenous-cause case. Consider: As the economy begins to expand, business picks up, so stock prices rise; and as business picks up, demand for energy rises as businesses gear up and operate at higher capacity. That's why stocks and oil go up together. Makes sense, doesn't it?

But neither claim explains the data. Sometimes oil and stocks go up or down together, and sometimes they trend in opposite directions. As with stocks and interest rates we discussed in Part I of this series, we could easily isolate examples of all four pairs of coincident trends.

To conclude, we can determine no consistent relationship between the two price series, and no economist has proposed one that fits the data.

This graph negates all the comments from economists who say that an "oil shock" would hurt the stock market and the economy. It also throws into doubt the very idea that stock prices and oil prices are linked.