In fact, the correlation is precisely opposite

You may remember that during the 2008-2009 financial crisis, many called into question traditional economic models. Why did the traditional financial models fail?

That's a crucial question to your financial well-being. The "10 Popular Investment Myths Shattered" series gives you a well-researched answer. Here is Part III.

Myth #3: "Expanding trade deficit is bad for economy -- and bearish for stocks."

Over the past 30 years, hundreds of articles -- you can find them on the web -- have featured comments from economists about the worrisome nature of the U.S. trade deficit. It seems to be a reasonable thing to worry about.

But has it been correct to assume throughout this time that an expanding trade deficit impacts the economy negatively?

Figure 8 answers this question in the negative: 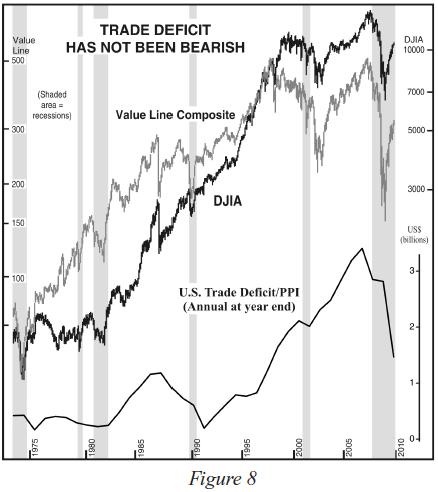 In fact, had these economists reversed their statements and expressed relief whenever the trade deficit began to expand and concern whenever it began to shrink, they would have accurately negotiated the ups and downs of the stock market and the economy over the past 35 years. The relationship, if there is one, is precisely the opposite of the one they believe is there. Over the span of these data, there in fact has been a positive -- not negative -- correlation between the stock market and the trade deficit.

So the popularly presumed effect on the economy is 100% wrong. Once again, economists who have asserted the usual causal relationship neglected to check the data.

Around 1998, articles began quoting a minority of economists who -- probably after looking at a graph such as Figure 8 -- started arguing the opposite claim. Fitting all our examples so far, they were easily able to reverse the exogenous-cause argument and have it still sound sensible. It goes like this:

In the past 30 years, when the U.S. economy has expanded, consumers have used their money and debt to purchase goods from overseas in greater quantity than foreigners were purchasing goods from U.S. producers. Prosperity brings more spending, and recession brings less. So a rising U.S. economy coincides with a rising trade deficit, and vice versa.

But once again there is a subtle problem. If you examine the graph closely, you will see that peaks in the trade deficit preceded recessions in every case, sometimes by years, so one cannot blame recessions for a decline in the deficit.

Something is still wrong with the conventional style of reasoning.