Does Inflation Really Make Gold and Silver Go Up?

Why precious metals are not a reliable inflation hedge

By Robert Prechter(excerpted from The Elliott Wave Theorist; published monthly since 1979)

This one seems like a no-brainer. The government or the central bank prints more bonds, notes and bills, and prices for things go up in response. Gold is real money, so it must fluctuate along with the inflation rate. It's basic physics.

Once again, it doesn't happen that way. Let's examine the history of inflation and the precious metals since the low of the Great Depression.

Inflation occurred relentlessly from 1933 to 1970, yet gold and silver remained unchanged over the entire time. True, the government fixed the price. But markets are more powerful than any government, and if the market had wanted precious metals prices higher, it would have made them go higher.

The government still fixes the price of gold. The official, legal price today is $42.22 per ounce. If you were to ship gold overseas, and it got lost, a domestic insurer would have to pay you only $42.22 per ounce to cover it. But investors in 1970 began forcing gold beyond the official price. They could just as well have done so anytime between 1933 and 1970, but they didn't. Had you held gold for that period, you would have held the worst investment on the board. Investors in the stock market were making 20 times their money through capital gains alone and 30 times their money assuming a 4% (non-reinvested) dividend. Bond investors made nearly as much money through compound interest. Yet your investment -- based on one-to-one, mechanical causality -- was dead in the water.

Inflation continued from 1970 to 1980, and gold and silver soared. Inflation was all in the news, so people credited inflation for making these prices rise. They also predicted that the rise would not stop, because inflation was not going to stop. They were right about the inflation part.

Inflation continued from January 1980 to April 2001, too. But gold and silver lost 83% of their combined value during these 21 years, as shown in Figure 19. 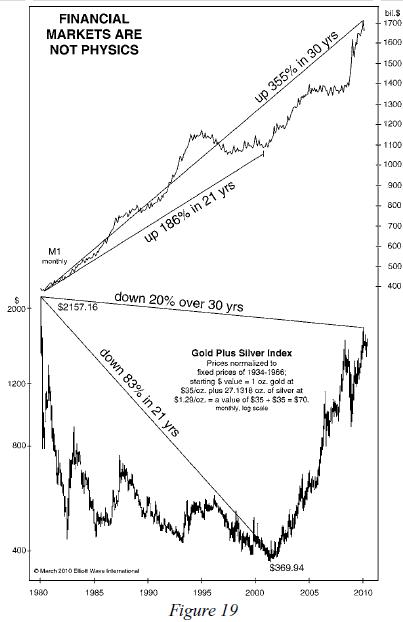 Investors who held these precious metals during that time were once again stuck in the worst investment available, but this time it was far more devastating. It was the only major investment that lost dollar value during those decades. Real estate went up, stocks went up, and bonds had a positive return. At the end of this period, a basketful of gold and silver was worth 17 cents, in inflated-dollar terms, for each full dollar that it was worth in January 1980. In terms of CPI purchasing power, the value of this investment fell to about six pennies per 1980 dollar. Stock prices, over the same period, rose 13 times in terms of dollars and 45 times in terms of gold.

However you look at it, the "basic physics" model failed to deliver. According to that model, gold and silver would have adjusted to the amount of inflation month by month, year after year. But nothing even remotely like that scenario happened.