Learn Why GDP Is a Poor Predictor of Stock Trends

Investors do NOT rationally value stocks according to changes in GDP

You may remember that after the 2008-2009 crash, many called into question traditional economic models.

Why did the traditional financial models fail? And more importantly, will they warn us of a new approaching doomsday, should there be one?

By Robert Prechter(excerpted from the monthly Elliott Wave Theorist; published since 1979)

Surely the stock market reflects the nation’s Gross Domestic Product. The aggregate success of corporations shows up as changes in GDP. Stocks are shares in corporations. How could their prices not reflect the ebb and flow of GDP?

Suppose that you had perfect foreknowledge that over the next 3¾ years GDP would be positive every single quarter and that one of those quarters would surprise economists in being the strongest quarterly rise in a half-century span. Would you buy stocks?

If you had acted on such knowledge in March 1976, you would have owned stocks for four years in which the DJIA fell 22%. If at the end of Q1 1980 you figured out that the quarter would be negative and would be followed by yet another negative quarter, you would have sold out at the bottom.

Suppose you were to possess perfect knowledge that next quarter’s GDP will be the strongest rising quarter for a span of 15 years, guaranteed. Would you buy stocks?

Had you anticipated precisely this event for 4Q 1987, you would have owned stocks for the biggest stock market crash since 1929. GDP was positive every quarter for 20 straight quarters before the crash and for 10 quarters thereafter. But the market crashed anyway. Three years after the start of 4Q 1987, stock prices were still below their level of that time despite 30 uninterrupted quarters of rising GDP.

Figure 10 shows these two events. It seems that there is something wrong with the idea that investors rationally value stocks according to growth or contraction in GDP. 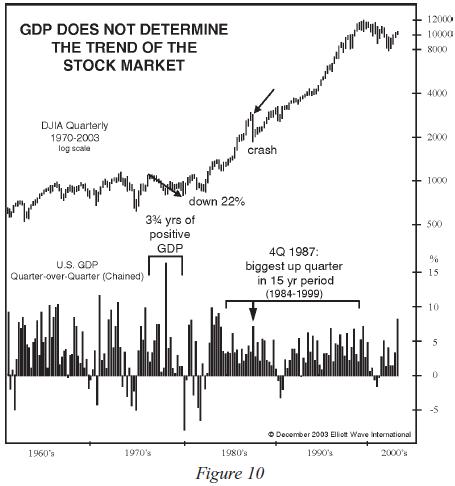 Interest rates, oil prices, trade balances, corporate earnings and GDP: None of them seem to be important, or even relevant, to explaining stock price changes. But you need not trust your own eyes. In a study that is stunning for its boldness in actually checking basis premises, Cutler, Poterba and Summers in a paper for the Journal of Portfolio Management in 1989 investigated the effect of economic news on stock prices and concluded,

"Macroeconomic news bearing on fundamental values…explains only about one fifth of the movement in stock prices."

Even here, I would question the conclusion that such news "explains" even 1/5 of the movement in stock prices. Surely a set of football statistics could generate a 1/5 correlation to the S&P. And every correlation, to have meaning, must have a theory to account for it.

What theory accommodates the idea that macroeconomic fundamentals explain 1/5 of stock price changes? If there is no accommodating theory, then the presumed causality involved is tenuous at best.