Would a Terrorist Attack Crash the Stock Market?

Terrorist violence seems like a solidly bearish factor -- and yet...

Myth #8: "Terrorist attacks would cause the stock market to drop." 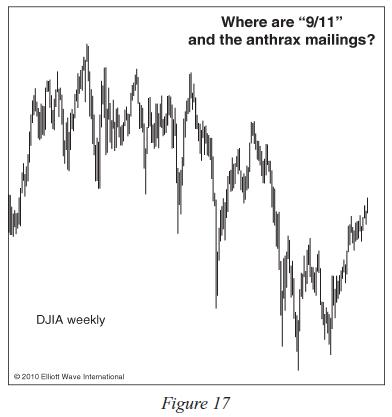 As it happens, there was indeed a lot of dramatic news during this time. For one thing, there were surprise terrorist attacks on U.S. soil, first the "9/11" attack on the World Trade Center and the Pentagon and secondly the slew of mailings of deadly anthrax bacteria, which killed several people, prompted Congress to evacuate a session, and caused havoc lasting months.

Where on the graph of stock prices would you guess all these events have happened? If you guessed "six trading days from a major bottom and all through a six-month rally," you would be correct. But if you are an exogenous-cause advocate, you would not have made that guess. Figure 18 notes these occurrences. 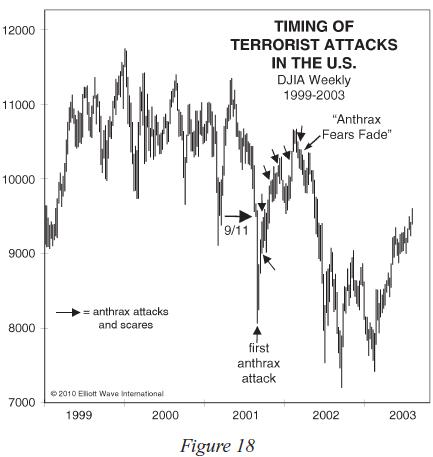 The 9/11 attack occurred more than halfway through a dramatic price decline and only six trading days from its end. Afterward, despite deep concerns that more such attacks were in the works, the stock market rallied for six months. The first anthrax attack occurred on the very day of the low for the year, and the attacks, deaths and scares continued throughout the strongest rally on the entire graph. To put it more starkly, the market bottomed when they started and topped out as soon as people realized they were over. If one were to insist upon a causal relationship, one would be forced to conclude that anthrax attacks are bullish for the stock market.

This kind of perverse conclusion is what we invariably reach when examining an exogenous-cause case along with actual data pertaining to it. This is why economists after World War II (see Figure 12 in Part VII) decided that wars were good for the economy. Figure 18 has similar implications for public policy. Should we encourage crazed people to send deadly packages in order to get the stock market to go up? This idea is no dumber than advocating war to get the economy rolling. But the evidence for it is right there, just as it was for the supposed "oil shock" of 1973.

We have uncovered at least one irrefutable fact: Terrorist attacks do not make the stock market go down. The assumption behind economists’ repeated implications that terrorist attacks would constitute an "exogenous shock" that would serve to drive down stock prices is shown to be completely wrong.

Happily, we are not entirely alone in making this observation. In the aforementioned 1989 paper, authors Cutler, Poterba and Summers concluded,

"There is a surprisingly small effect [from] big news [of] political developments...and international events."

That is indeed the case. But it is "surprising" only to devotees of the exogenous-cause paradigm, which means virtually everyone. Proponents of socionomic causality and the Elliott wave model of financial price change are not surprised in the least.