Virtually everyone believes this statement; certainly most economists do. Keynesians and monetarists believe that authorities can control the money supply and interest rates, and most neo-Austrians believe that the Fed is all-powerful when it comes to inflating: Whatever inflation rate it wants, it simply manufactures.

Not long ago [in late 2008 -- Ed.] the U.S. government announced that it will fully back the debt of the mortgage companies it created (Fannie Mae, Freddie Mac); it pledged to use taxpayers' money and borrow unlimited amounts to fund banks that it deems "too big to fail," while pledging that the FDIC will fund shortfalls at all other banks. At the same time, the world's top central banks offered unlimited credit at near-zero interest rates, in other words, free money.

According to the exogenous-cause model, these historic pledges and bailouts should have had immediate results. Take a look at Figure 20. Can you tell where on this graph of stock prices authorities took these actions? 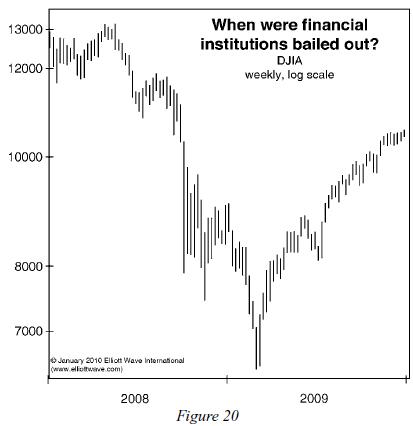 According to the economists' beliefs, the only rational place for them to have taken place would be at the bottom of the market. The minute the authorities began flooding the market with liquidity is the minute it should have turned up.

Figure 21 shows that in fact these actions took place in the early portion of the biggest stock market decline in 76 years. These actions did not push stock prices back up. The market finally bottomed months later, at a time when nothing along these lines happened. 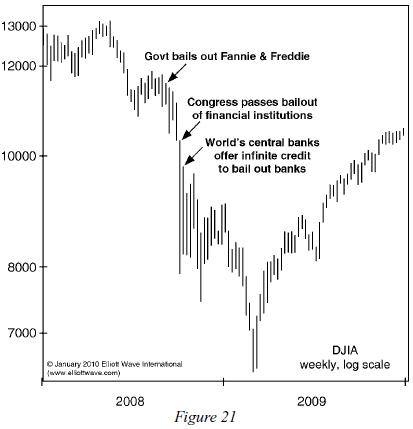 It is no good to claim that these actions had results eventually. By that reasoning, any future turn in the stock market would prove the contention. Such reasoning is tautological, because the market fluctuates.

An exogenous-cause believer would do far better to explain this result by claiming that authorities' actions of this type must be bearish, because every time they acted, the market fell; and when they finally stopped, it rose.

Economists do not advance this argument, because they can't make sense of it. Instead, they cling to their traditional cause-and-effect logic, while the markets just do what they want.

Over the preceding pages, we have seen that interest rates, oil price changes, the balance of trade, changes in earnings, changes in GDP, the onset or termination of war, peaceful times, terrorist attacks, inflation, a central bank's monetary policy and a government's fiscal policy have no reliable effect on financial market prices. Sixty-four years ago, a financial modeler named Ralph Nelson Elliott, after observing markets for some time, concluded,

"Current news and political developments are of only incidental importance, soon forgotten; their presumed influence on market trends is not as weighty as is commonly believed."

According to our investigation, Elliott was too generous; they appear to carry no weight at all.

I am unaware of any exogenous-cause claim that holds up under scrutiny. An event that seems to affect stock prices one way in the present, when investigated in the past, fails to provide any consistently reliable relationship. Even claims that seem inescapably reasonable, if not irrefutable, fail the test of even moderately rigorous empirical observation.