"Extend and Pretend" and Other Signs of the Coming "Car Crash"

The demand for new cars has tapered off significantly

Delinquencies have been increasing for subprime car loans. Yet, car dealers are unfazed and have been allowing buyers to "trade in underwater vehicles two or three times." The credit boom is reaching an extreme.

The major car dealership owners in my town are well known. Their billboards are everywhere and they buy a lot of television air time. It's probably like that in other locales.

But, despite this intense push to sell cars, Bloomberg said on Feb. 28 that "across dealer lots in America inventory is piling up." For example, a New Jersey car dealer had to rent extra space to store his unsold Hondas for the first time in 37 years.

Indeed, this chart from our March Elliott Wave Financial Forecast shows that the demand for new cars took a nosedive in January. 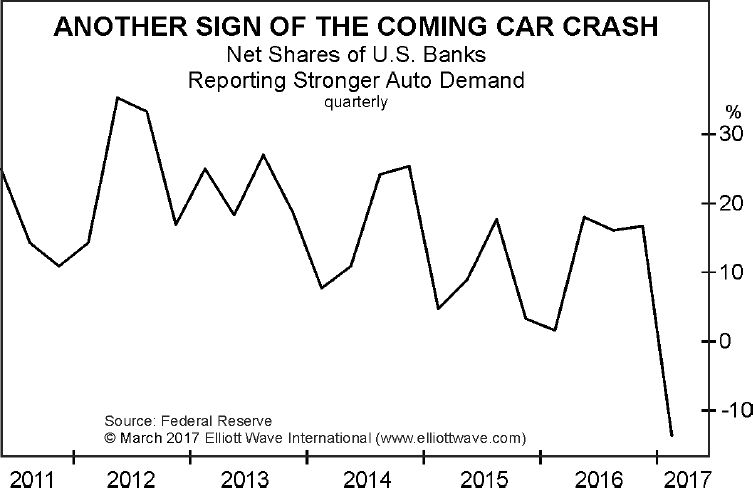 Even so, for those who are in the market for a new car, prices have been rising.

A March 1 CNBC article discussed the route that many buyers are taking to handle the monthly payments:

Consumers are taking out longer auto loans. In the fourth quarter, almost a third of the auto loans were for a term of at least six years.

Also consider that nearly 25% of car loans are subprime. Fitch Ratings reports that the 60-day delinquency rate for subprime auto loans hit 9.1% in January, up from 7.9% a year earlier.

Yet, it's still full-steam ahead for many car dealers. Our April Elliiott Wave Financial Forecast says:

Car dealers continue to allow buyers to “trade in underwater vehicles two or three times, something that is evidenced in the lengthening loan terms. According to Moody’s, the average loan period for a new car has risen from 62 months in 2016 to 68 months now. For subprime borrowers, the average loan term is now 72 months.” This is sometimes referred to as “extend and pretend” lending; it’s what happens at the tail end of a credit boom.

Yes, another credit boom is in full blossom.

As of September 2016, the Institute of International Finance noted that total global debt rose to a record high of $217 trillion, or 325% of world-wide GDP, which was also a record.

It's well to keep in mind that all credit bubbles end badly. We got a taste of that during the 2007-2009 financial crisis.

Right now, our publications are preparing subscribers for what we see ahead.