Flipping Out Over Real Estate… Again

Quite a few people quit their jobs in the late 1990s to day trade stocks -- just in time for the big bear market that kicked off in the year 2000.

But, by 2003, animal spirits had returned -- and this time, many people turned to another way to get rich quick: house flipping.

The May 2003 Elliott Wave Financial Forecast took note and said:

Glowing proclamations about real estate's future include a slew of books on using "real estate to get rich quick." A recent issue of the Detroit Free Press reviewed eight different titles on "Flipping Properties," "Real Estate Loopholes" "Value Investing in Real Estate," and so on... Real estate is in for a historic wipeout.

Real estate mania did continue for a time. But, as you know, a big bust followed the 2006 high in U.S. home prices.

House flippers are at it again. Take a look at this chart from our June Elliott Wave Financial Forecast, which said: 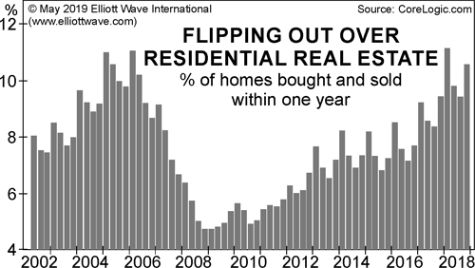 As Bloomberg reported on May 9, softness in the real estate market is already taking its toll:

Young Real Estate Flippers Get Their First Taste of Losing

After piling in when the market was hot, investors are facing losses from homes that take too long to sell.

And, it's not only flippers who are having a tough time.

The Los Angeles property dubbed Chartwell had a cool $50 million chopped from its asking price on Monday, taking its price tag down to $195 million from the whopping $245 million it was asking when it officially hit the market in October.

Yes, Chartwell is the home that was used in the 1960s show, The Beverly Hillbillies.

Is another real estate bust just around the corner? One way to get the answer is to look at the current Elliott wave picture in the stock market, because real estate and stocks tend to trend together.

Get our analysts' complete commentary in our comprehensive Financial Forecast Service -- no obligation for 30 days. Check out the details below.

What Are the Best Market Indicators? (Hint: the Test of Time)

EWI analysts make it their business to KNOW the exact history of market indicators, and how they've served our subscribers throughout the years.

Right now, you can see the tried and true indicators our analysts are using today -- and learn what they suggest for the future price paths of major U.S. financial markets.

You have a full 30 days to review them at your leisure -- no obligation on your part whatsoever!

Keep reading to find out how to get started …

This is “Anything but Positive for Housing”

Why U.S. Housing Prices May Be Set to Decline

How the “Great Resignation” Ties in with a Financial Peak

The Stunning Truth About the FDIC and Your Bank Deposits