Here's What Precedes Every Recession by 10 Months

"All systems go!" for the U.S. economy. That's the consensus from more than one survey.

Our first stop is this chart and commentary from our February Elliott Wave Financial Forecast: 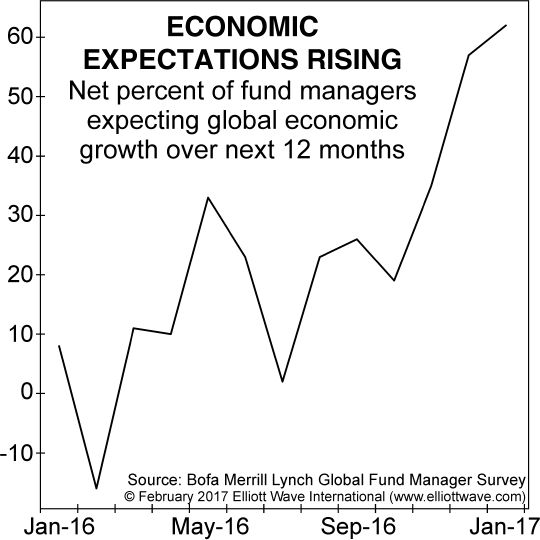 This chart of the BofA Merrill Lynch Global Fund Managers survey shows a dramatic shift among fund managers from February 2016, when the DJIA was down 16% from May 2015. Over the last year, the net expectation of 200 or so fund managers has gone from 16% anticipating a recession to 62% favoring global growth, i.e., a 78-point swing.

Also consider that on Jan. 22, Gallup's U.S. Economic Confidence Index reached a reading of 13. That's the highest level since Gallup started the survey in 2009.

Moreover, the Conference Board Consumer Confidence Index rose to 113.70 in December, its highest reading since August 2011.

But, as the saying goes, hold onto to your horses.

Contrary to popular belief, this optimism does not bode well for the U.S. economy's long-term prospects. Since the Consumer Confidence data first appeared in 1967, peaks not far from the current level, at an average of 118.8, have preceded the start of every recession by an average of 10 months.

In the meantime, if the major stock indexes continue to make new highs, "the economy should continue expanding, with a several-month lag," as our February Elliott Wave Financial Forecast notes. As we've said many times, the economy follows the stock market.

But, keep in mind that the market has been rising for nearly eight years.

Indeed, the market's Elliott wave pattern is giving us big clues about the next major market turn.