Another brick in the wall of "financial crisis 2.0"

You've seen recent articles marking the 10-year anniversary of the Lehman Brothers collapse, which occurred on Sept. 15, 2008. Today, many ask if another financial crisis is likely.

The answer is, of course. Bull markets and crashes are a natural part of the stock market cycle. The real question is, what could throw a stick in the spokes of today's bull market? You've probably been looking for an answer, too.

Here at EWI, we've studied historical financial crises at length, and our research brought us to a single conclusion: The root cause of every big blowout is an unsustainable build-up of precarious debt. Subprime mortgages, if you remember, played a key role in the 2008 financial crisis.

So, what's been the story with debt since the crisis? On April 18, the Guardian noted:

Specifically, the article says that global economies are vulnerable because debt has climbed to 225% of the world's GDP. This is the "macro" picture.

Let's zoom in on the U.S. with this Aug. 11 New York Post headline:

More Americans are defaulting on their credit cards

This is especially noteworthy given the economy has shown strong growth. As you probably heard, U.S. GDP grew at 4.1% in the Q2, another strong quarter of many over the past few years.

Besides credit cards, more auto borrowers are having a hard time making on-time payments. Again, this is even with a booming economy. But there is more. Another recent article was headlined:

US students may collectively owe $2T in loans by 2021

However, there's a chance that the higher education debt bubble will start to deflate in a serious way long before 2021. Indeed, our September Elliott Wave Financial Forecast showed this chart and said: 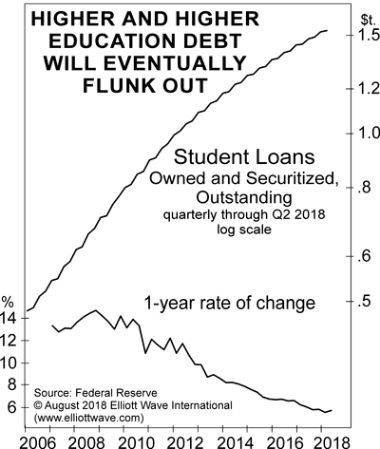 The steadiness of the rise in outstanding student loans may appear unstoppable, but we continue to state emphatically that it will reverse... A closer look reveals that this change of trend may already be well along. The steady retreat of the one-year-rate-of-change on the bottom of the chart is one clue to this reality. Another is the source of the ongoing rise in absolute terms: an increase in interest expenses rather than new loans. Student loan originations peaked six years ago and are down 20% since then.

The question is: If the debt situation is this precarious when the economy is expanding, imagine the scenario during the next economic downturn. But when will it start?

Just like in 2007, we anticipate that the next economic downturn will follow a downturn in the stock market. It's a subject we've studied in-depth as well, and our current publications give you our latest.

This is a relevant question, especially given that the financial media keeps telling us that we're in the longest bull market ever.

Our September Elliott Wave Financial Forecast informs subscribers about bull markets -- and how observers should gauge them.

You can have subscriber-level access to our Financial Forecast for an entire 30 days. Get details below …