This is Why the Mortgage Market Suddenly Looks Riskier

"Two major changes in the mortgage market go into effect this month."

Some U.S. real estate markets have bounced back strongly since the Great Recession while others have languished. All told, "the recovery is spotty at best." Now, two new developments are adding risk to the mortgage market.

Well, I could offer a pile of statistics, but all told, some markets are hot -- like Seattle and San Francisco -- and some are not -- like Ft. Lauderdale and New Haven, Connecticut.

Our July Elliott Wave Financial Forecast put it this way:

Some housing market measures have exceeded the highs of 2006, but the recovery is spotty at best, fitting a bear market rally as opposed to a new bull market.

Of course, a bear market rally in U.S. housing implies that the next leg down will probably be worse than the housing crash that occurred 10 years ago.

Indeed, deflation's long-term tug on U.S. real estate has been evident for a while now. 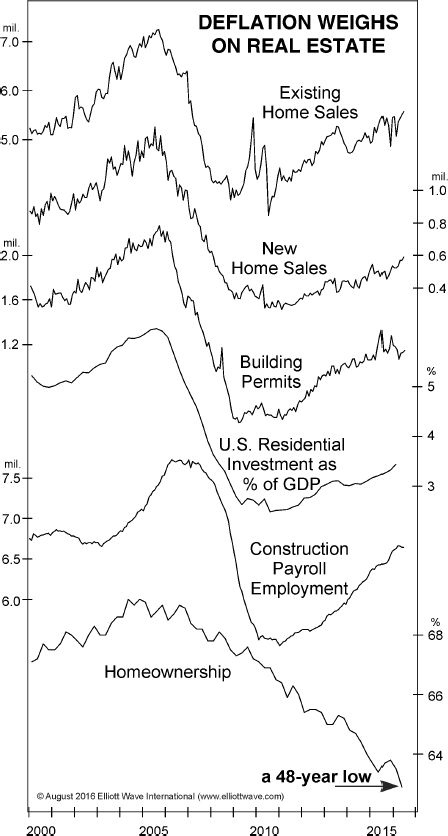 In our view, the initial decline from 2006 to 2011, sometimes referred to as the subprime meltdown, was just a prelude to a far deeper and longer lasting decline.

And today's developments are falling in line with our outlook (CNBC, July 5):

Two major changes in the mortgage market go into effect this month ... .

Of about 220 million Americans with a credit profile, approximately 7 percent have liens or civil judgments against them. With these hits to their credit removed, their scores could go up by as much as 20 points.

"It's a significant impact for still a very large number of people," said [a] senior vice president of financial services at LexisNexis, who is concerned that the move will add significant risk to the mortgage system. [emphasis added]

In addition to the FICO changes, mortgage giants Fannie Mae and Freddie Mac are allowing borrowers to have higher levels of debt and still qualify for a home loan. [emphasis added]

Returning to the July Elliott Wave Financial Forecast -- the publication provides even more analysis of U.S. real estate, which includes thought-provoking charts from the 1920s and today. The parallel is striking.