U.S. Housing: "Not Since the Mania Days"

Will a strong economy fend off another housing crash?

The U.S. housing market has staged a significant rebound since prices bottomed in February 2012. Now, at least one measure of optimism has returned to the height of the bubble days. Some say not to worry because "the economy is in far better shape than a decade ago." Is today really different?

The belief that U.S. home prices would continue to climb was pervasive in 2005-2006.

This is from our January 2006 Elliott Wave Financial Forecast:

"Virtually no investors expect sudden burst of housing bubble," says the headline of a UBS/Gallup Poll of investor attitudes: "Just 1% of all investors expect housing prices next year to exhibit a rapid decline." This sentiment is bearish for real estate prices.

Housing prices went on to top in July 2006, and we know that a historic crash followed. Prices bottomed in February 2012. The price recovery since then reached a milestone in September 2016 (Washington Post, Nov. 29, 2016):

The average home price in September rose 0.1 percent above the July 2006 peak.

And, today, optimism about the housing market has returned to what it was like during the bubble days.

Review this chart and commentary from our just-published June Elliott Wave Financial Forecast: 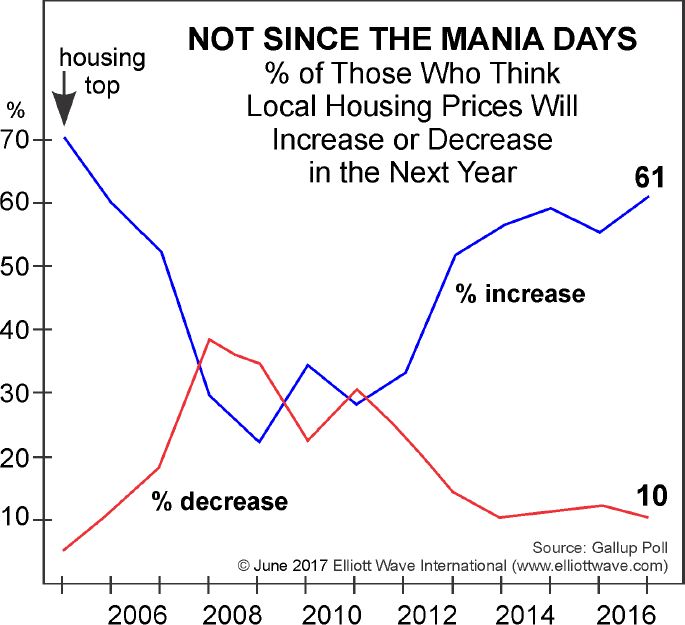 At this point, a Fibonacci 61% of Americans expect housing prices to increase in the next year. That's the highest percentage since homebuilding stocks peaked in July 2005. ... Conversely, just 10% of respondents believe home prices will decline in the next year, which is also the lowest percentage since 2005. Put another way, 90% of the Americans surveyed by Gallup say housing prices will not fall in the next year. That's almost as high as in 2005, when 95% of survey respondents were onboard with the housing boom.

The current optimism can also be seen in these two headlines:

But, ABC News says we shouldn't worry about the housing market's rebound (May 29):

The economy is in far better shape than a decade ago, when economists called the debt unsustainable and the housing market crashed. That's not the concern now.

In our view, anytime sentiment becomes almost one-sided, it is time to be concerned.