U.S. Housing: Look at This 50% Retracement

We've all heard that the three most important considerations in real estate are location, location and location.

In other words: Imagine you found that perfect location, but didn't realize that the housing market was ripe for a reversal at the very time you were ready to move?

Of course, the challenge here is that no one knows the future.

However, just like with other financial markets, Elliott wave analysis and other indicators can be highly useful with real estate.

Here's an example from our March 2005 Elliott Wave Financial Forecast:

The five-wave pattern from 1990 says that the January drop in home sales is the beginning of a much steeper long-term decline.

First, a quick reminder that most housing market observers at the time -- not to mention, real estate buyers and sellers -- were still highly bullish on the sector. "Last I heard, they weren't making any more land," was a common snickering response to a real estate skeptic then.

Even so, homebuilding stocks topped a few months later in 2005, and home prices peaked in 2006. You remember what happened next.

Fast forward to the May 2019 Elliott Wave Financial Forecast. Here's a chart and commentary: 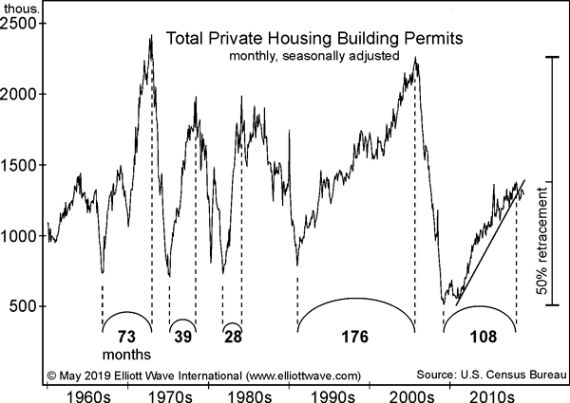 As the chart shows, housing booms tend to be relatively relentless affairs, with steady vertical ascents. The prior boom in housing building permits lasted 176 months, and was much longer than prior booms. That's why in the mid-2000s, it was commonly stated that house prices only go up. This belief was disproven by the bust, shown as a steep collapse on the chart. The rise in building permits to the high in March 2018 lasted 108 months from the prior trough, so it was long in the tooth by historical standards.

You'll notice that there's been a 50% upward retracement of the prior decline.

What does this mean?

Join in -- and prepare now for what our analysts see ahead.

Near-Term Forecast a "Must See"

Here's what our Short Term Update said on Friday, May 10:

We pay attention to over a hundred indicators …

In turn, it described the indicators our analysts believe are the most important right now.

Learn about them, and you can prepare for what our Elliott wave experts anticipate next.

You can do so, risk-free for 30 days. Get the details on how to get started just below …

Why Commercial Real Estate is Set to Get Slammed